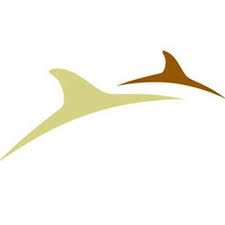 Table 1: Hushamu 2022 Significant Intercepts. Copper and gold equivalent calculations based on the following metal prices which were used in the Company’s 2021 PEA (as defined below) on the North Island Project: Cu = US$3.25/lb, Au = US$1,650/oz, Mo = US$10/lb, Re = $1,256/kg. Calculations assume 100% recovery; totals may not add due to rounding. Note on equivalent calculation: Copper equivalent is determined by calculating total contained metal value/ tonne, dividing by the copper price, and then dividing the resultant number of pounds of copper by 2204.6. Gold equivalent is determined by calculating total contained metal value/tonne, dividing by the gold price, and then multiplying the resultant number of troy ounces of gold by 31.103. (Graphic: Business Wire)

Northisle Copper and Gold Inc. (TSX-V: NCX) is pleased to announce assay results from its 2022 Spring drill program at Hushamu. These new results continue to affirm the interpretation that higher grade mineralization exists in under-drilled areas of the modelled pit at Hushamu. In addition, HU22-06 was continued in copper mineralization for at least 200 meters beyond the outline of the modelled pit shell.

Robin Tolbert, Vice President Exploration of Northisle stated “Drilling at Hushamu during early 2022 continues to demonstrate the potential for improved grade and tonnage at Hushamu. In addition, we have demonstrated that historical visual interpretations of the alteration profile at Hushamu may have underestimated the overall size of the mineralized portion of the system.” 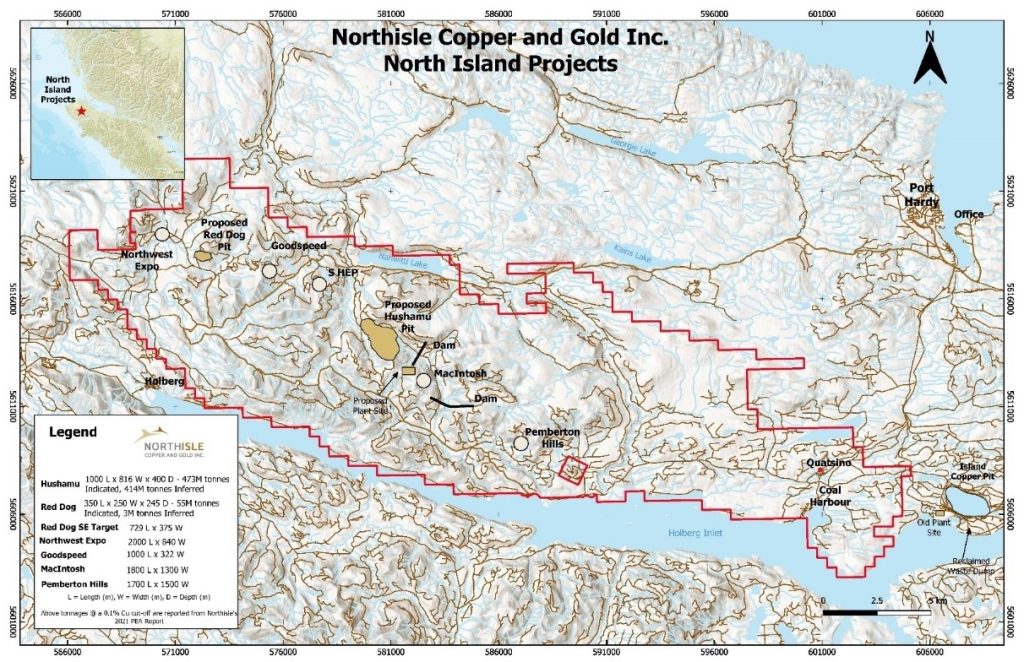 Northisle has now received the assay results of the six drill holes from its 2022 Spring drill program at Hushamu (HU22-01 to HU22-06), which has the objective of converting in-pit Inferred Mineral Resources to Indicated Mineral Resources ahead of the Company’s planned pre-feasibility study. The mineralization remains open to the northwest and southeast of the deposit, and based on results released today is interpreted to be open at depth significantly past previous modelling. Significant intercepts from the 2022 Spring drill holes can be found in Table 1 above.

Drill hole collar locations for the 2022 drilling at Hushamu can be found in Table 2, and the drill holes are shown in context in Figure 2 with key sections showing the 2021 PEA proposed final pit outline as well as the surface projection of the Hushamu Mineral Resource estimate. 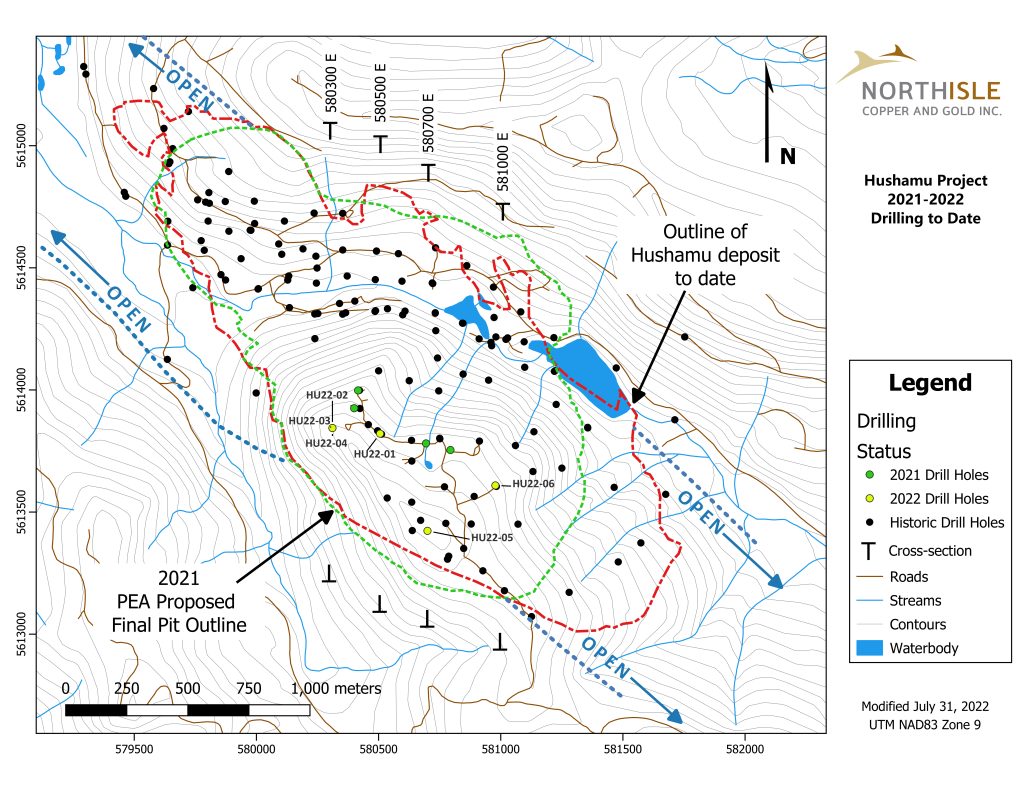 The significance of the additional 2022 Spring infill holes at Hushamu are: 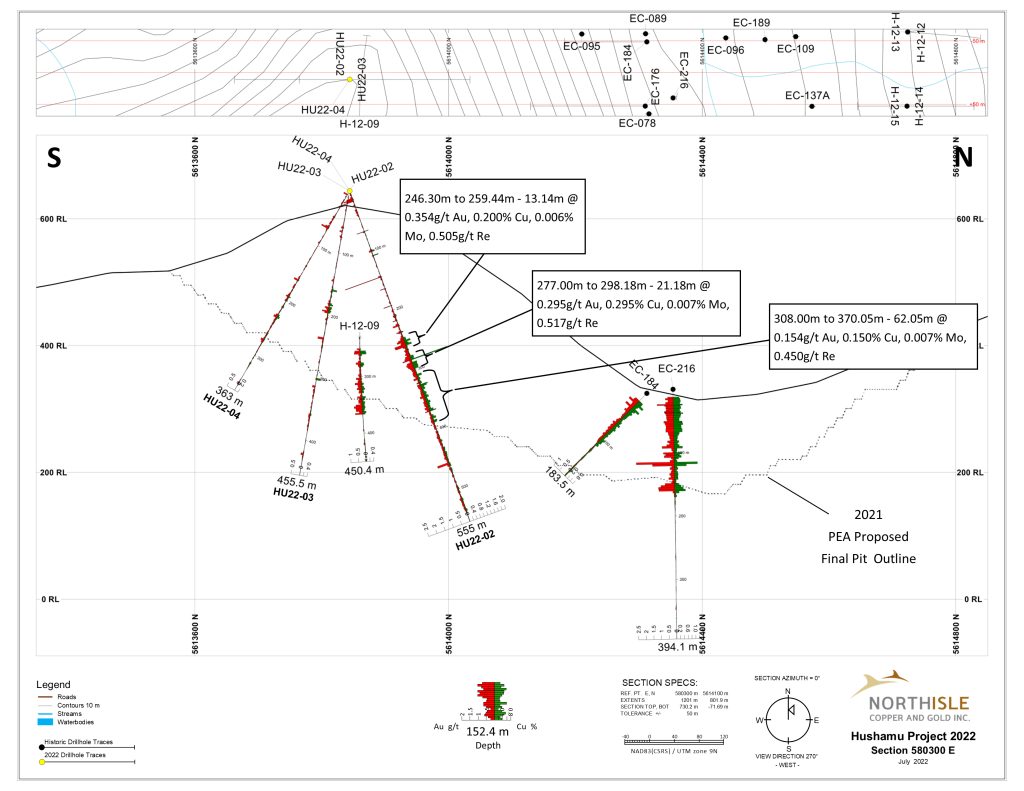 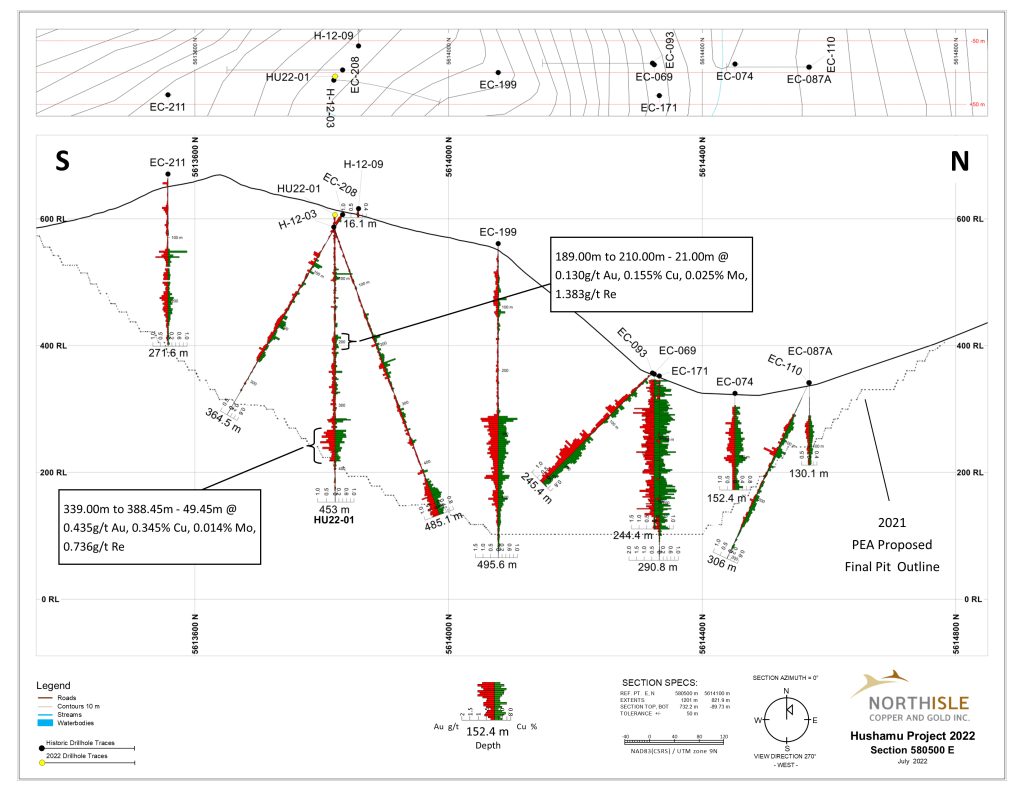 The drill hole structure log for H17-02 on Figure 5: Section 580700E indicates the presence of a fault zone from 307 m to 384 m, similar discontinuities in drill holes along UTM Easting 5613600E on other sections may explain the lower grades exhibited in these and other holes in this area. The objective of future additional drilling like HU21-04 on either side of these ’null’ holes is to increase the Mineral Resource in these and similar areas elsewhere in the deposit. 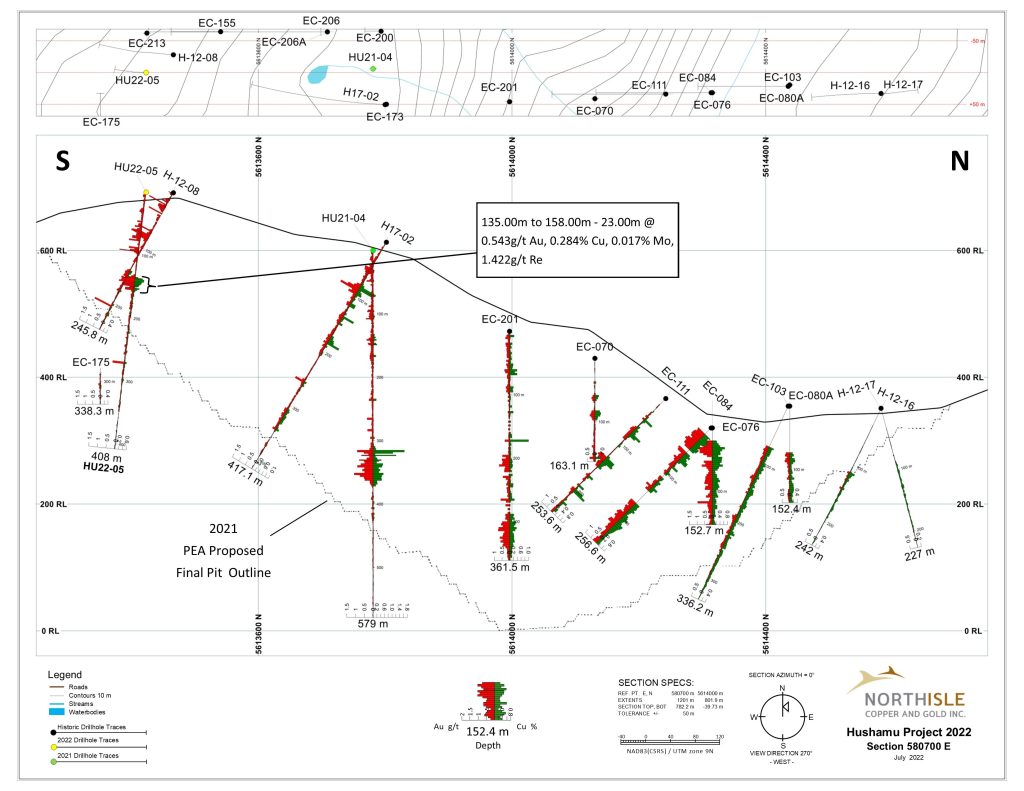 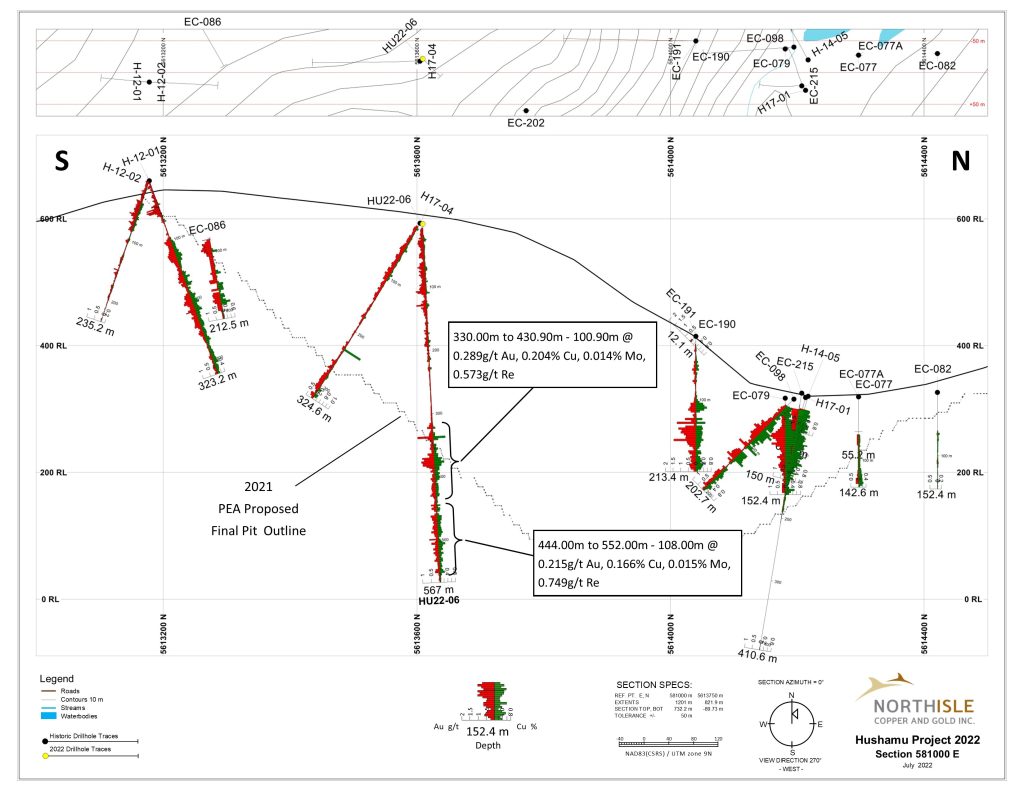 The diamond drill core logging and sampling program was carried out under a rigorous quality assurance / quality control program using industry best practices. Drill intersections in this release are typically HQ to 100 m and NQ thereafter to the end of holes. After drilling, core was logged for geology, structure, and geotechnical characteristics utilizing Geospark© core logging software, then marked for sampling and photographed on site. The cores for analyses were marked for sampling based on geological intervals with individual samples 3 m or less in length. Drill core was cut lengthwise in half with a core saw. Half-core was sent for assays reported in this news release. Prior to cutting core for assay bulk density was also determined on site by taking 20 to 25 cm lengths of whole core of each lithology at 10 m intervals. The ends of these were then cut at right angle to the core axis, retaining all pieces to be returned to the core box for later sample cutting and analysis. The diameter of each core sampled for bulk density was measured at each end with digital calipers to 3 decimal places and recorded. The length of the core was measured on four sides at 90 degrees to each other, to 2 decimal places and recorded. The software averaged the lengths and diameters. The mass of the dry core was measured twice on an Ohaus© balance to 2 decimal places. If no discrepancy occurred the measurement was recorded. If there was a discrepancy the measuring was repeated until no discrepancy between 2 measurements occurred. The density was calculated using the formula Bulk Density = π times r² times h (where r is radius of core and h is length of core). Certified standard masses are used to calibrate the scale balance used for bulk density determinations. The balance in the core logging area was levelled on a large concrete block to avoid vibration, was leveled, and surrounded by a wooden partition to avoid wind affecting the balance. The measurements were recorded in Geospark© logging software and Bulk Density calculated to 2 decimal places. In compiling assays on sections, intervals of less than 0.1% Cu, if less than 10 metres continuous width, within larger intervals >0.1% Cu were considered internal waste and included in the reported assays. If the interval was 13 m or greater, these assays were excluded from the compilation. Likewise, any intervals >0.15 Cu less than 13 width outside any other assays > 0.1% Cu were considered external waste and not reported.

A total of 5% assay standards or blanks and 5% core duplicates are included in the sample stream as a quality control measure and are reviewed after analyses are received. Standards were obtained from WCM Minerals, Vancouver and CDN Minerals, Langley. Blanks were obtained from unmineralized course bagged limestone landscaping rock. Standards and blanks in 2022 drill results to date have been approved as acceptable. Duplicate data add to the long-term estimates of precision for assay data on the project and precision for drill results reported is deemed to be within acceptable levels. Samples were sent to the SGS Natural Resources Laboratory in Burnaby, BC where the samples were dried, then crushed to 75% passing 2 mm, then a 250 g split was pulverized to 85% passing 200 mesh size (75microns) pulps. Clean crush material was passed through the crusher and clean silica was pulverized between each sample. The pulps were analyzed for gold by fire assay fusion of 50 g of the 250 g split. Total gold content was determined by digesting the silver doré bead from the fusion and then analysing by ICP/AES (SGS Code GE_FAI51V5). All samples were also analyzed for 49 additional elements by taking a 0.25 g of the 250g split which was heated in HNO3, HClO4 and HF to fuming and taken to dryness. The residue was dissolved in HCl and then analyzed utilizing ICP-AES/ICP-MS (combining SGS Code GE_ICP40Q12 and GE_IMS40Q12). Some samples were also additionally analyzed more precisely for Rhenium and Germanium (SGS Code-GE_IMS90A50-C). SGS Canada Inc. is an independent, international ISO/IEC 17025:2005 accredited laboratory. The analytical results were verified with the application of industry standard Quality Control (“QA/QC”) procedures.

Pulps and rejects of holes with significant assay intervals are stored at Western Mineral Storage. The remaining split core is indexed and stored at the Northisle logging and office facility in Port Hardy, BC.

Results in this news release are length weighted averages.

Robin Tolbert, P.Geo., Vice President Exploration of Northisle and a Qualified Person as defined by National Instrument 43-101 – Standards of Disclosure for Mineral Projects (“NI 43-101”), has approved the scientific and technical disclosure contained in this news release.

Northisle Copper and Gold Inc. is a Vancouver-based company whose mission is to become a leading and sustainable mineral resource company for the future. Northisle owns the North Island Project, which is one of the most promising copper and gold porphyry deposits in Canada. The North Island Project is located near Port Hardy, British Columbia on a 33,149-hectare block of mineral titles 100% owned by Northisle stretching 50 kilometres northwest from the now closed Island Copper Mine operated by BHP Billiton. Northisle recently completed an updated preliminary economic assessment for the North Island Project and is now focused on advancement of the project through a prefeasibility study while continuing exploration within this highly prospective land package.