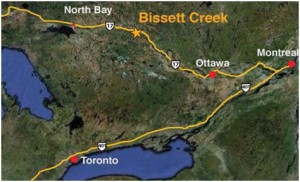 Northern Graphite Corporation (TSX VENTURE:NGC)(OTCQX:NGPHF) announces that the Ministry of Northern Development and Mines  has accepted the Company’s Mine Closure Plan for filing and that the Company has been granted a mining lease for the Bissett Creek project. This effectively means the Company can start construction, subject to the availability of financing.

The MCP is an all-encompassing document that describes the nature of the operations that will be carried out, current baseline environmental conditions, potential effects on the environment together with appropriate mitigation measures, and the Company’s plan for rehabilitating the site to its natural state at the end of operations. A number of other permits relating to air, noise, water, species at risk, etc. are required prior to the commencement of production and will follow in the normal course now that the MCP has been filed. Most of these issues are already addressed in the MCP.

Gregory Bowes, CEO commented that: “We look forward to getting on with the next phase of a project that has the potential to generate substantial benefits for local and First Nation communities and the people and province of Ontario, as well as the Company’s shareholders. It is unfortunate that it took the Ontario government 10 months to approve the MCP when it is represented as a 45 day process.”

The economics in the existing bankable Feasibility Study  are being revised to incorporate a new and much larger resource as well as lower graphite prices and a number of modifications to the original capital and operating cost assumptions. Contract mining will be replaced by owner mining which is expected to reduce operating costs by over $100 per tonne of concentrate. Approximately $7 million in capital will be added for mining equipment but will be largely offset by a number of reductions including the removal of costs for detailed engineering which is already underway, modifications to the SAG mill drive and discharge, use of a mobile crusher and removal of a redundant mill circuit. The revised economics are expected to be completed within a couple weeks.

The Company has also initiated a Preliminary Economic Assessment to show the economics of doubling production in three or four years to meet the anticipated growth in graphite demand. The potential mine life is currently over 80 years based on measured and indicated resources only. Due to the flat lying nature of the deposit, production can be expanding without a significant increase in the stripping ratio and capital or operating costs.

Northern Graphite is a Canadian company that has a 100% interest in the Bissett Creek graphite deposit located in eastern Ontario and is well positioned to benefit from the favourable supply/demand outlook for graphite. Northern Graphite is the only graphite company to have completed a bankable Feasibility Study and be permitted for construction. Bissett Creek is a large flake, high purity deposit with low engineering, technical and political risk, reasonable capital costs and competitive operating costs.