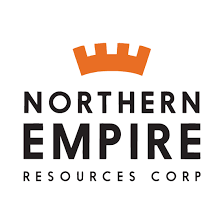 Michael G. Allen, President and CEO stated, “To date we’ve released results for 30 drill holes from around the SNA deposit and all have returned significant gold intercepts. This speaks to the size and robustness of the mineralizing system we are exploring. Included in the intercepts are several broad zones of shallow oxide mineralization with significant grade.”

Holes SNA18-011, 012, and 014 have extended known mineralization at SNA deposit to the northeast by approximately 75 meters.

The SNA deposit is located approximately 400 meters to the south of the Mother Lode deposit currently being explored by Corvus Gold on a set of 11 claims fully enclosed by the Company’s Sterling Project. Northern Empire owns approximately 5% of the historic Mother Lode pit. The SNA deposit is a Carlin-type deposit dipping gently to the east, largely hosted in Devonian Carbonates. The Mother Lode deposit dips to the northwest, suggesting a potential large-scale hinge structure between the two deposits.

The areas currently being drilled by Northern Empire are highly prospective for gold mineralization with numerous fault structures having been mapped by Company geologists. Large-scale structures were also observed in geophysical data collected by the Company. The combination of prospective stratigraphy, structural preparation, and intrusives give a strong possibility of expanding the known deposits in this area.

An NI 43-101 compliant inferred resource totalling 126,000 oz grading 1.03 g/t Au at a 0.3 g/t gold cut-off was estimated for SNA in 2017. The drill results cited herein postdate that estimate. SNA is described as a Carlin-type deposit hosted within Devonian Carbonates in the footwall of the Fluorspar Canyon Detachment Fault. For further information on the SNA Deposit and the Sterling Project, please refer to the technical report dated July 12, 2017 found on the Company’s website and SEDAR.

Northern Empire Resources Corp. is expanding and discovering heap leach gold deposits in Nevada. The Company presently has initial resource statements on four heap-leachable deposits at the 100%-owned Sterling Gold Project, including the high-grade, fully permitted Sterling Mine (231,000oz at 3.67g/t Au). The pit-constrained inferred resources on the property total 924,000 oz Au at an average grade of 1.28 g/t Au. The Company is well-financed and is aggressively drilling all four deposits in 2018 to increase resources and explore for new discoveries on the district-scale land package. Founders and management have a track record of increasing shareholder value through discovery, project development and M&A with successes that include Newmarket Gold, Kaminak Gold, Underworld Resources and International Royalty Corp. For further information on the Sterling Project, please refer to the technical report on the project dated July 12, 2017, found on the Company’s website, www.northernemp.com, and SEDAR.

Michael G. Allen, P. Geo., President & CEO of Northern Empire, and a Qualified Person as defined by NI 43-101, has reviewed the technical information contained in this news release. He is the non-independent qualified person for this news release and has verified the data.