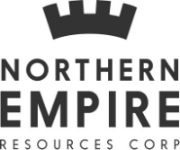 Michael G. Allen, President and CEO, stated, “D18-003C is the first of at least 10 exploratory, resource expansion, and infill holes that we plan to drill into the Daisy Deposit as part of our 15,000-meter program. The exceptional grade of these results is very encouraging. All of the mineralization from 67.88 to 173.22 meters down the hole was oxidized, as was the final 2.87 meters of mineralization. For the high-grade core of the deposit, where we cut 38.25 meters of 3.09 g/t gold, cyanide solubility assays averaged 90% of fire assay, indicating that the Daisy deposit may be amenable to open pit mining with heap leach recovery of gold. Based on the exceptional drill results to-date at the Sterling Project, the Company plans to mobilize additional drill rigs to the Project shortly. Currently rigs are working on the SNA and Secret Pass deposits. In addition, field crews are mapping extensions of the known deposits, as well as new targets within the Project.” 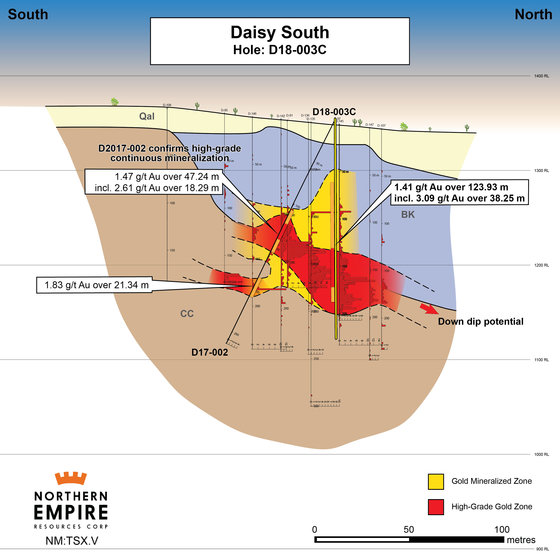 About the Daisy Deposit

Northern Empire owns three deposits with 43-101 resource estimates within the Fluorspar Canyon Trend: Daisy, Secret Pass, and SNA, which are part of the Crown block of claims within the 141 square kilometer Sterling Gold Project, which also includes the permitted Sterling Mine. Northern Empire intends to aggressively explore the Crown block due to the excellent potential for additional discoveries and potential to expand the existing resources.

Michael G. Allen, P. Geo., President of Northern Empire, and a Qualified Person as defined by NI 43-101, has reviewed the technical information contained in this news release. He is the non-independent qualified person for this news release and has verified the data.

Northern Empire Resources is a well-financed gold exploration and development company focused on an emerging heap leach gold district in southern Nevada. The 100%-owned, Sterling Gold Project hosts four distinct deposits, including the fully permitted, heap leach Sterling Mine. Northern Empire is led by an experienced team of professionals with an exceptional record of creating value for shareholders (Newmarket Gold, Kaminak Gold, Underworld Resources, and International Royalty Corp). The Company completed a successful drill campaign in 2017 and will aggressively drill known mineralized zones in 2018 to expand resources and explore for new deposits on its 141 km2 land package.