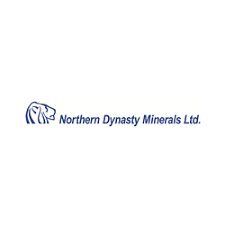 Northern Dynasty Minerals Ltd. (TSX: NDM) (NYSE American: NAK) announces that it has closed its previously announced bought deal offering. A total of 12,200,000 common shares of the Company were sold at a price of US$0.41 per share for gross proceeds of approximately US$5.0 million. The Offering was completed pursuant to an underwriting agreement dated June 19, 2019 among the Company and Cantor Fitzgerald Canada Corporation, as lead underwriter and sole book runner, and a syndicate of underwriters including BMO Capital Markets, H.C. Wainwright & Co., LLC. and TD Securities Inc. The Underwriters were paid a 6% cash commission and received 244,000 non-transferable common share purchase warrants.  Each Underwriter Warrant entitles the holder to acquire one common share of the Company at the Offering Price for a period of 12 months.

The proceeds from the Offering are anticipated to be used for: (i) operational expenditures, including engineering, environmental, permitting and evaluation expenses associated with the Pebble Project and advancement of the U.S. Army Corps of Engineers Environmental Impact Statement; (ii) ongoing outreach and engagement with political and regulatory offices in the Alaska state and U.S. federal governments, Alaska Native partners and broader regional and state-wide stakeholder groups; and (iii) general corporate purposes.

The Offering was made by way of a prospectus supplement to the Company’s existing Canadian base shelf prospectus and related U.S. registration statement on Form F-10 (SEC File No. 333-229262).  The U.S. form of Base Shelf Prospectus is included in the Registration Statement.  This press release does not constitute an offer to sell or the solicitation of an offer to buy securities, nor will there be any sale of the securities in any jurisdiction in which such offer, solicitation or sale would be unlawful prior to the registration or qualification under the securities laws of any such jurisdiction. The securities being offered have not been approved or disapproved by any regulatory authority, nor has any such authority passed upon by the accuracy or adequacy of the Prospectus Supplement, the Base Shelf Prospectus or the Registration Statement.

Northern Dynasty is a mineral exploration and development company based in Vancouver, Canada.  Northern Dynasty’s principal asset, owned through its wholly owned, Alaska-based U.S. subsidiary, the Pebble Partnership, is a 100% interest in a contiguous block of 2,402 mineral claims in southwest Alaska, including the Pebble deposit.  The Pebble Partnership is the proponent of the Pebble Project, an initiative to develop one of the world’s most important mineral resources.