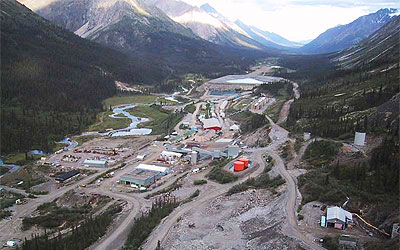 North American Tungsten Corporation Ltd. (TSX VENTURE:NTC) to announce that metallurgical testing and analysis of material from Tailing Pond 3 is ready to commence. The next phase of the tailings reprocessing plan is ready to begin now that the 2011 and 2012 drilling and modeling program has been completed.

Tailings Pond 3 was the primary storage facility for all underground and surface production from 1971 until February 2007. During this period of operation, mill feed graded considerably higher than current feed, leading to significant amounts of WO3 being discarded as tailings, despite good plant recoveries at the time. The tailings pond has a maximum height of 41 meters, a footprint area of approximately 102,000 square meters and a volume of approximately 2.24 million cubic meters, providing a substantial readily available prospective source of material for reprocessing and resource recovery.

A sonic drill program throughout the summer of 2011 and spring of 2012 was conducted to explore the possibility of reprocessing unrecovered WO3, Cu and Au from Tailings Pond 3. The program was designed to establish the approximate tonnage and grade of the available tailings which were then compared to historical production statistics. A total of 25 holes were drilled with a spacing of approximately 200 feet depending on ground conditions. Tailings samples were acquired at 5 foot intervals over the entire length of each hole and assayed at ACME Laboratories, Vancouver. In-house assay work along with preliminary metallurgical work was also conducted on site. A preliminary block model was constructed using Minesight software (Figure 1).

To view Figure 1 please click to the following link: http://media3.marketwire.com/docs/Figure-1.pdf.

The potential tonnage and grade determined by the drilling and modeling program are comparable with available historical mill production statistics from 1974 to 2006.

With new multiple element assays from the sonic drill program, the potential opportunity for also recovering associated secondary Cu and Au as well as the primary WO3 from the tailings can also be determined and incorporated into the design of a possible reprocessing flowsheet.