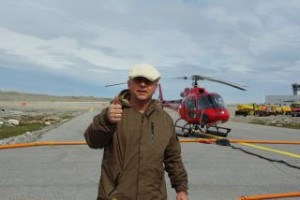 North American Nickel Inc. (TSX VENTURE:NAN)(OTCBB:WSCRF) (CUSIP: 65704T 108) is pleased to announce that it has awarded a drill contract to Westcore Drilling from Salmo, British Columbia for the Company’s 2013 summer drill program on their 100% owned Maniitsoq property. The program is scheduled to begin in June, 2013.

A minimum of 3,000 meters is planned to extend high grade nickel-copper-platinum group sulphide mineralization discovered in 2012 that is open at depth and to assess high priority previously untested VTEM conductors.

The targets to be tested at depth occur within the 75 km long by 15 km wide Greenland Norite Belt  and include:

Two new and highly conductive anomalies will also be tested by the 2013 drill program. Target P-63 is an untested, norite-hosted anomaly that occurs along the edge of 1.5 km by 0.9 km norite intrusion in the southern part of the GNB. It tops out 73 m below surface, is 14 m thick, with an initial strike length of 58 m and dips to the northwest for 1,057 m.

The second target is an off hole conductor at Imiak Hill, down plunge of significant intersections made by NAN in 2012.

The Maniitsoq property in Greenland is a Camp scale project comprising 4,983 square km’s covering numerous high-grade nickel-copper sulphide occurrences associated with norite and other mafic-ultramafic intrusions of the Greenland Norite Belt. The 70km plus long belt is situated along, and near, the southwest coast of Greenland, which is pack ice free year round.

The first two discoveries of economic mineralization at Imiak Hill and Spotty Hill confirm the high value and potential of the GNB.

The Post Creek/Halycon property in Sudbury is strategically located adjacent to the producing Podolsky copper-nickel-platinum group metal deposit of Quadra FNX Mining. The property lies along the extension of the Whistle Offset dyke structure. Such geological structures host major Ni-Cu-PGM deposits and producing mines within the Sudbury Camp.