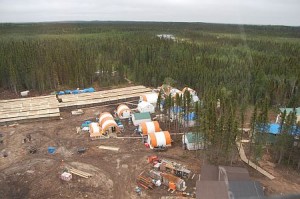 Noront Resources Ltd. (TSX-V:NOT) has signed a definitive agreement with MacDonald Mines Exploration Ltd. to acquire a 75% interest in all of MacDonald’s properties in the Ring of Fire district, subject to the approval of the TSX Venture Exchange.

“MacDonald’s Butler and Sanderson properties are excellent, strategic purchases,” said Noront Chief Development Officer Steve Flewelling. “They are highly prospective and further consolidate our land position, adding 35% to our Ring of Fire holdings. Noront now controls approximately 75% of the staked claims in the region, and we will consider every opportunity to increase our holdings as we are confident that the Ring of Fire will be the next major mining camp in Ontario.”

Noront believes the Butler mineralization, in conjunction with its McFaulds copper-zinc resources, represents a compelling district-wide exploration opportunity for VMS deposits. Previous work on the Butler property identified four zinc-copper VMS occurrences (Butler No. 1, 2, 3 and 4) along a 12 kilometre trend of felsic volcanic rocks. Some of the more promising drill intersections to date include:

Above drill intersections were previously press released by Macdonald

Noront will issue $750,000 of common shares in the Company to MacDonald to earn its 75% interest. MacDonald will have a 25% carried interest until the issuance of a NI 43-101 compliant resource on one of the properties, at which time MacDonald will have the option to convert the carried interest into a 1% NSR (the Conversion Right). If MacDonald does not elect to exercise its Conversion Right, Noront can elect to buy back MacDonald’s 25% interest for $3 million (the Buy-back Right), payable in cash or shares at the option of Noront. If neither the Conversion Right nor the Buy-back Right are exercised, a Joint Venture arrangement will be formed between the parties to develop the properties.

Noront’s first development project will be Eagle’s Nest, a nickel-copper-platinum group element mine with an 11-20 year life and projected direct employment of more than 300. This project has the highest value ore in the Ring of Fire and requires a more modest infrastructure commitment than the Company’s other projects.

The Eagle’s Nest site is currently accessed only by air and winter road, therefore, development requires an all-season road. Noront expects to access the mine through an existing East-West corridor to be shared with local First Nations communities. The federal and provincial governments recently funded a community-led study of this route and are expected to make a joint announcement with local First Nations this year regarding plans for an access road. The Company anticipates that mine construction will begin in 2018 when road construction starts, resulting in first concentrate production in 2021.

Noront believes the development of the Ring of Fire should create jobs, economic growth and long-term prosperity for local aboriginal communities. Responsible mining is integral to the way the Company operates, and as such, we will be developing Eagle’s Nest in partnership with the local communities with a focus on direct and indirect employment and establishing business development opportunities.

Noront plans to start the construction of its Blackbird chromite project once Eagle’s Nest is in production. Since acquiring Cliffs’ chromite deposits in 2015, Noront has become the majority owner of all current major chromite deposits in the Ring of Fire, and has the most significant NI 43-101 measured and indicated chromite resource. Noront has reviewed the technical data acquired from Cliffs and developed a chromite plan that incorporates this information into its development timeline.

The Blackbird mine is expected to produce approximately 500,000 tonnes of ore per annum from underground. A ferrochrome smelter, which would be built for potential expansion, will be constructed at a yet to-be-determined brown-fields site in Ontario. The chromite project has the potential to produce up to 200,000 tonnes per annum of high quality ferrochrome which represents roughly 50% of current North American demand.

Larger scale chromite development supported by the Black Thor and Big Daddy Deposits will follow, with a timeline that is dependent upon the seaborne ferrochrome market. The larger scale project has the potential to produce up to 1.5 million tonnes of concentrate and 600,000 tonnes of ferrochrome.

Noront Resources Ltd. is focused on development of the high-grade Eagle’s Nest nickel, copper, platinum and palladium deposit and the high-grade chromite deposits including Blackbird, Black Thor, and Big Daddy, all of which are located in the James Bay Lowlands of Ontario in an emerging metals camp known as the Ring of Fire.


Ascot Extends Gold Mineralization at the "Day Zone” to the North