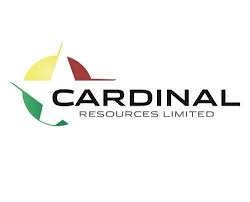 Nord Gold SE is pleased to announce that it has acquired a relevant interest in 98,443,593 shares in Cardinal Resources Limited giving it voting power of approximately 19.9 percent of the total share capital outstanding. This acquisition includes an agreement to purchase 81,038,233 shares in Cardinal (approximately 16.4 percent interest) held by Corporate International Holdings BV, a subsidiary of Gold Fields. The Gold Fields Purchase will be conducted at a price of A$0.45775 per share in cash and will complete on or about Wednesday 18 March 2020.

The Preliminary Proposal values the equity of Cardinal at approximately A$227 million (c. US$143 million) on a 100 percent basis1 , and represents a cash premium of 83 percent to the closing price of A$0.25000 per Cardinal share on the Australian Securities Exchange on 13 March 2020, and a 43 percent premium to the volume weighted average price of Cardinal shares over the last week on the ASX. The Preliminary Proposal will be financed through Nordgold’s existing cash reserves and facilities.

Following the successful completion of confirmatory due diligence to Nordgold’s satisfaction, Nordgold would seek to formulate a binding Preliminary Proposal (including, if applicable, incorporating the conditions set out in Annexure A of this announcement or any additional conditions it sees fit).

Any final proposal will be conditional on successful completion of confirmatory due diligence to Nordgold’s satisfaction and approval from the Nordgold Board of Directors. Neither the Preliminary Proposal (nor, for the avoidance of doubt, this announcement) constitutes a public proposal to make a takeover bid for the purposes of section 631 of the Corporations Act 2001 (Cth).

Cardinal is a West African gold-focused exploration and development company that holds interests in tenements within Ghana. Cardinal is concentrating on the development of the Namdini Gold Project and released the Feasibility Study on 28 October 2019. Cardinal has been looking since approximately H1 2019 to source project financing, and is concurrently evaluating strategic alternatives to bring the Namdini Project into production.

Nordgold is a privately owned, internationally diversified gold producer, with a proven track record of operational excellence and mine development, and a significant international development pipeline. Nordgold operates ten mines, with four of these in West Africa (three in Burkina Faso and one in Guinea). It is strategically committed to West Africa and is strongly positioned to bring the Namdini Project into production based on its development and operational expertise in the region and robust balance sheet.

Since its foundation in 2007, Nordgold has established a global reputation as a leading developer of tier one gold mining assets. Over a five year period, Nordgold has identified, planned and constructed three separate gold mines on time and on budget, including two in Burkina Faso (Bouly and Bissa) and most recently, the Gross mine in Russia, which continues to exceed all initial expectations.

“Nordgold’s Preliminary Proposal would represent a substantial cash premium for Cardinal shareholders and provides an immediate opportunity to realise value without the associated risks of project development. Nordgold is committed to operating in West Africa, and has the proven development experience and balance sheet to bring Namdini into production to the benefit of the local community and all stakeholders.”

Nordgold is an internationally diversified gold producer established in 2007. Nordgold has a proven track record of operational excellence and benefits from a significant international development pipeline. The Company is relentlessly focused on shareholder value, committed to running safe, efficient, profitable operations, which enable it to generate strong cashflows and in turn, continue to invest in its pipeline of new growth opportunities while generating returns for investors. In 2019, Nordgold produced 1,041 million ounces of gold.

Nordgold operates 10 mines (5 in Russia, 3 in Burkina Faso and one each in Guinea and Kazakhstan). It has several prospective projects in feasibility study and advanced exploration phases, as well as a diverse portfolio of early-stage exploration projects and licences in Burkina Faso, Russia, French Guiana and Canada. Nordgold employs over 8,000 people.