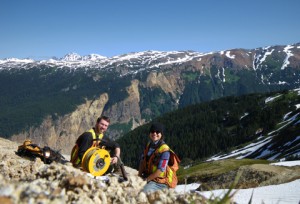 The Nisga’a Nation and Seabridge Gold Inc. (TSX:SEA)(NYSE:SA) are pleased to announce that they have reached agreement in principle on material components of a Benefits Agreement in connection with Seabridge’s proposed KSM project located in northwestern British Columbia.

Mitchell Stevens, President of the Nisga’a Nation, comments that:

“The Nisga’a Nation and Seabridge have worked diligently over the last number of months towards reaching agreement on material terms related to economic benefits, opportunities for jobs and contracting, ongoing engagement and project certainty.

“We appreciate Seabridge’s approach to working with the Nisga’a Nation. They started working with us early on in the development phase of the KSM Mine and they have taken seriously and been very responsive to our concerns around the environmental and social impacts of the project on Nisga’a Treaty interests. As well, Seabridge has demonstrated a real willingness to assist the Nisga’a Nation in creating genuine economic opportunities for, and building the capacity of, Nisga’a citizens.

“Reaching agreement in principle demonstrates that the Nisga’a Nation is open for business, and that we support environmentally responsible economic development that respects the interests of the Nation under our Treaty. Seabridge has demonstrated an ability to work cooperatively with us on both counts. We look forward to concluding the Benefits Agreement negotiations as quickly as possible and continuing our participation in the environmental assessment process for the KSM Project.”

“The Nisga’a Nation’s approach to negotiations has been professional and co-operative from the very beginning. We believe that the key points of the Benefits Agreement that have now been settled provide the basis for a genuine partnership between Seabridge and the Nisga’a Nation for many decades to come. The Nisga’a Nation’s representatives have made many valuable contributions to the evolution of the KSM project‘s design. We have listened to their environmental, cultural and economic concerns, which have been reasonable and well thought out, and we have incorporated responses to these concerns into the final design which is now in the formal Environmental Assessment review process. From our perspective, our on-going relationship with the Nisga’a Nation, which began more than five years ago, captures the spirit of mutual respect and careful attention to detail that is needed in the development of major mining projects. Our agreement with the Nisga’a Nation can hopefully be a springboard for achieving agreements with the other First Nations who also have an interest in the success of KSM.”