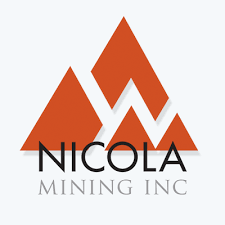 The Phase 1 RC Program provides a simple overview of copper grade and sectional volume of the approximate 80-90 million-tonne historical wastepile surrounding the Craigmont Mine pit, as well as insight if any sections merited further exploration. The Phase 1 RC Program also added to positive 3060-Portal RC drill results, as announced in the September 26, 2017, news release. Given that the wastepile material was placed in benches, there would be no direct mining costs associated with production.

Assay results from the drill program are summarized in Diagram 1. Highlights of the results include:

On October 3, 2016, the Company announced that it had entered into an Exploration and Material Purchase Agreement with Teck Highland Valley Copper Partnership (“HVCP”), a wholly owned subsidiary of Teck Resources Limited, involving mine strip material (refer to Oct. 3, 2016, news release) surrounding the historic Craigmont open pit.

A clear zone of interest has been found in the largest volume section of the wastepiles, which is located on the southern side of the pit. The Phase 1 RC program found the south-central quadrant contains the thickest and most potentially economic grade for the waste piles. Results have warranted a follow up program (“Phase 2 Program”) to delineate copper mineralization and trace the extent of the higher grading material within the waste piles. The Company recognizes that an approximate 100-hole Phase 2 Program will provide only conceptual quantity and grades and will be insufficient data to complete a NI 43-101 resource. Phase 2 will, however, be able to provide insight into approximate in-situ calculations based on volume and grade. The Phase 2 Program will include additional holes at Portal 3060 which were not completed during the 2017 exploration program. The Company has the funds to complete the entire Phase 2 DrillingProgram. 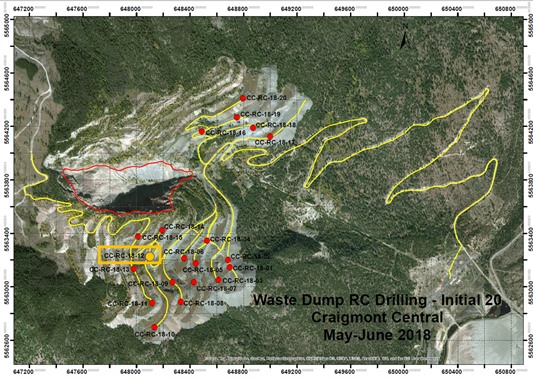 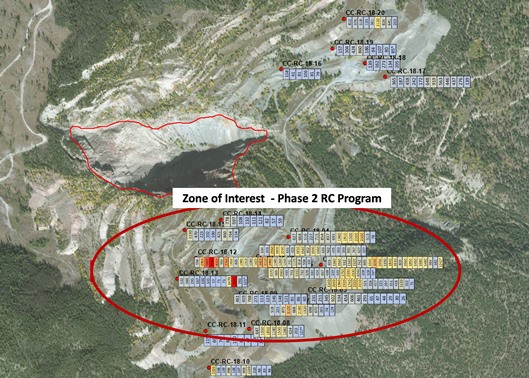 Peter Espig, Chief Executive Officer of the Company, commented, “The Phase 1 RC Program proved extremely valuable, as it provides us with insight into the significant potential of the mine strip material surrounding the historic pit. We are encouraged that grading of the wastepiles are associated with location and not depth, which limits waste rock and allows the Company to focus on the eastern side of the historic pit. In addition, because the largest cost of mining, which includes engineering, infrastructure, surveying and blasting have all been incurred, the value of the wastepile is significant and warrants a follow up Phase 2 Program.

The Company implemented a quality control program for this program to ensure best practices are utilized for sample collection and analysis of RC cuttings. Samples were collected at 2.0 m intervals down hole with lithology, alteration and mineralization documented for each interval. Quality control measures include insertion of standards and duplicates into the sample stream at a frequency of 1 blank and 1 standard for every group of 20 samples, and field duplicates at a rate of 3 per 100 samples. Activation Laboratory (ISO 17025 Certified) in Kamloops, British Columbia, conducted sample analysis using ICP Aqua Regia 38-element (IE3) and fire assay gold (IA2) packages. Certified reference standards and rock blanks were placed in the sample stream with a ratio of approximately one sample out of 10.

Kevin Wells, P.Geo, a consulting geologist to the Company, is the independent qualified person as defined by National Instrument 43-101 – Standards of Disclosure for Mineral Projects for the technical disclosure contained in this news release.

Nicola Mining Inc. is a junior mining company listed on the TSX Venture Exchange and is in the process of recommencing mill feed processing operations at its 100% owned state-of-the-art mill and tailings facility, located near Merritt, British Columbia. It has already signed four mill profit share agreements with high grade gold producers. The fully-permitted mill can process both gold and silver mill feed via gravity and flotation processes. The Company also owns 100% of Treasure Mountain, a high-grade silver property, and an active gravel pit that is located adjacent to its milling operations.

The New Craigmont Project is a wholly-owned copper property with an active mine permit (M-68), located within the world-class Highland Valley porphyry district. It benefits from excellent infrastructure. The Property is at the corner intersection of the Nicola and Guichon batholiths, of which the latter is the precursor to mineralization at Highland Valley. In November of 2015, Nicola became the first group in decades to consolidate ownership of the Property, and has been actively conducting mineral exploration since.

There are currently no mineral resource estimates on the Property. Historical “non-NI 43-101” resource calculations are recorded in internal memos and geological reports for Placer Development. An internal memo written by J.F. Bristow on October 30, 1985, to Craigmont Mines Ltd. reported a zone known as Body No. 3 containing a historic estimate of 1,290,000 tons (1,170,268 metric tonnes) of copper grading 1.53% copper. * This estimate assumes a 0.7% copper cut-off and a 20-foot mining width between drill sections 6565E and 8015E. The material in Body No. 3 contains mineralization primarily in silicate-rich rocks.