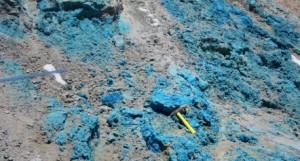 NGEx Resources Inc. (TSX:NGQ) is pleased to report that it has closed its previously announced private placement.

The net proceeds of the private placement will be used to fund the Company’s ongoing exploration programs in Chile and Argentina as well as for corporate development and general working capital purposes.

Two insiders of the Company, directly or indirectly, purchased a total of 3,500,000 Common Shares under the Offering constituting a “related party transaction” as defined under Multilateral Instrument 61-101 – Protection of Minority Security Holders in Special Transactions (“MI 61-101”). The Insider Participation is exempt from the valuation and minority shareholder approval requirements of MI 61-101 by virtue of the exemptions contained in Sections 5.5(a) and 5.7(1)(a) of MI 61-101 based on the fact that neither the fair market value of such Insider Participation, nor the consideration paid by the insiders, exceeds 25% of the Company’s market capitalization. NGEx has not filed a material change report 21 days prior to the closing of the Offering as participation of the insiders had not been established at that time.

This news release does not constitute an offer to sell or a solicitation of an offer to buy the securities described herein in the U.S., or in any jurisdiction in which such an offer or sale would be unlawful. The securities described herein have not been and will not be registered under the U.S. Securities Act of 1933, as amended, or any U.S. state securities laws and may not be offered or sold in the U.S. or to the account or benefit of a U.S. person or a person in the U.S. absent registration or an applicable exemption from the registration requirements.