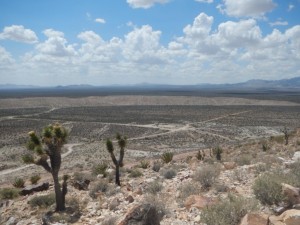 NewCastle Gold Ltd. (TSX-V:NCA) and Catalyst Copper Corp. (TSX-V:CCY) are pleased to announce that they have entered into the definitive agreement providing for the previously announced combination of their respective businesses to create a new company, anchored by the substantially permitted Castle Mountain Gold Project located in California, with the goal of creating a new mid-tier gold company.

The combined company will provide shareholders with exposure to a significant, substantially permitted gold resource at NewCastle’s Castle Mountain Gold Project, including 0.48 million measured ounces of gold at 0.86 g/t, 3.7 million indicated ounces at 0.57 g/t, and 0.76 million inferred ounces at 0.58 g/t1, as well as a strengthened management team led by Richard Warke, as Executive Chairman. The post-merger board of NewCastle will consist of Richard Warke, David Adamson, Mark Wayne, David Reid, Jim Gowans, Frank Giustra and Colin Sutherland. The combined company will continue to be named “NewCastle Gold Ltd.”

The Agreement includes customary provisions including, among other things, non-solicitation covenants, a fiduciary out of the Catalyst board and a right of NewCastle to match any superior proposal. In the event that Catalyst wishes to terminate the Agreement in order to support a superior proposal, Catalyst is obligated to pay to NewCastle an amount equal to C$1.5 million as a termination payment.

In connection with the Arrangement, NewCastle engaged GMP Securities L.P. to provide a fairness opinion to the NewCastle board of directors. As consideration for its services under this engagement, GMP will be issued, subject to approval of the TSX-V, 357,143 common shares of NewCastle.

NewCastle has 100% of the right, title and beneficial interest in and to the Castle Mountain Venture, a California general partnership, which owns the Castle Mountain property in San Bernardino County, California. The Castle Mountain heap leach gold mine produced over one million ounces of gold from 1992 to 2001, when mining was suspended due to low gold prices. The Mine and Reclamation Plan, under which the mine operated, was authorized by the County of San Bernardino as the Lead Agency and remains in effect. Water for the drill programs was accessed from existing patented wells on the Project.

Ian R. Cunningham-Dunlop, P. Eng., the Company’s Vice President Exploration, is the designated Qualified Person for this news release within the meaning of NI 43-101. He has reviewed and verified that the technical information contained in this release is accurate and has approved of the written disclosure of the same.