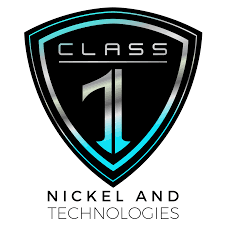 Class 1 Nickel and Technologies Ltd. (CSE: NICO) (OTCQB: NICLF) is pleased to announce the discovery of a new zone of high-grade nickel sulphide mineralization from recent drilling south of the Marbridge Mine at the Somanike Project, in the Abitibi Region of Quebec (Figure 1).

Figure 1. Location of the Somanike Project near La Motte in northwestern Quebec.

The winter 2021 program consisted of six holes totalling 1,580 metres to test priority targets along the Ataman conductor trend, interpreted recently from a 2014 VTEM survey, and to follow-up on a nearby (200m westwards) massive sulphide intersection of 1.41% Ni over 0.5 m from previous drilling. This new drill program was completed by G4 Drilling of Val-d’Or, Quebec, under the supervision of GFE Forestry & Exploration Services of La Motte, Quebec and Alexandr Beloborodov Géologue Inc. of Laval, Quebec.

The first drill hole, SR-21-07, designed to test a strong conductor located 400 m west along trend from the historical Ataman showing, intersected massive nickel sulphides (Figures 2 and 3). Two sulphide mineralized intervals were intersected (Table 1). Samples from the upper mineralized interval returned 0.84% Ni over 4.20 m, including 1.92% Ni over 0.80 m and 1.18% Ni over 1.7 m, from 49.6 m downhole, in altered ultramafic rocks. Samples from the lower mineralized interval returned 0.41% Ni over 8.15 m from 55 m downhole, including 1.18% Ni over 1.7 m, in altered mafic rocks. One of the 0.4 m long massive sulphide core sample returned 0.081 g/t Rh. The drill core samples were assayed by AGAT Laboratories of Mississauga, Ontario. The drill hole was surveyed by a borehole electromagnetic probe (BHEM) for detection of off-hole conductors by TMC Geophysique of Val-d’Or, Quebec. Interpretation work on the survey results continues. The mineralization in SR-21-07 remains open in all directions.

Figure 2. Collar locations of the six diamond holes drilled at Somanike in 2021. Hole SR-21-07 intersected massive nickel sulphides in a strong conductor along the airborne electromagnetics (AEM) trend (green) on strike to the west from the historical Ataman nickel sulphide showing.

Since the drill hole discovery, field checking on the surface above the massive sulphide intercept in SR-21-07 uncovered an outcrop (Alex Showing) with a 6-inch vein of rusty pyrite. A sample of the sulphide mineralization was submitted to the ALS Laboratories in Val-d’Or for assay, along with nine additional samples from a surface mineral prospecting program in the Marbridge-Ataman area. This outcrop does not appear to have been previously sampled, even though the original Ataman Showing itself (400 m to the east) was discovered in 1938. The Ataman Showing is located approximately 1 km south of the historic Marbridge Nickel Mine.

The additional five holes drilled as part of the 2021 program did not return significant assay intervals. However, borehole EM surveys were completed and interpretation work continues. Nevertheless, those drill holes did reveal useful information on the structure and stratigraphy of the ultramafic rock units for planning future exploration programs.

The next steps in nickel sulphide exploration at Somanike include:

Class 1 Nickel employed a quality assurance and quality control program for the drill program, to ensure leading practice in the sampling and analysis of drill core. This practice includes insertion of certified standards and blanks into the drill core sample stream. Assay samples are taken from NQ-size drill core sawn in half; one-half of the core is shipped to AGAT Laboratories in Mississauga for assay and the other half is kept in the core box on-site for future reference. At AGAT Laboratories, the analytical methods employed consist of four-acid digest followed by sodium peroxide fusion and ICP-OES finish for multi-element analysis (including Ni, Cu, Co and S); fire-assay collection and ICP-OES finish for palladium, platinum and gold; and nickel collection fire assay and ICP-MS finish for the platinum-group elements, including rhodium.

The Somanike Property land package consists of 110 mining titles covering 5,146.06 hectares within a large NW-trending ultramafic complex that hosts several nickel sulphide occurrences in the prolific Abitibi Greenstone Belt region of northwestern Quebec. The Somanike Property is located approximately 25 km north of the mining centre at Malartic, 40 km northwest of Val-d’Or, and 60 km east of Rouyn-Noranda. The Property also contains many recognized target nickel trends and geophysical anomalies. One of these trends is the Ataman conductor trend, located 1 km south of the Marbridge Mine.

The Somanike Property includes Quebec’s first nickel mine, the historical Marbridge Mine, a high-grade nickel mine operated by Falconbridge Nickel. Marbridge Mine occurs within a large NW-trending deformed and altered ultramafic complex. The Mine produced 702,366 tonnes grading 2.28% Ni and 0.10% Cu from 1962 to 1968, prior to being placed on care and maintenance in 1968. The Mine consisted of two shafts accessing four separate mineralized zones over a combined strike length of 1000 m. The mineralized material was trucked 25 km south and processed at the Canadian Malartic Plant. Since 1968, leading groups have reviewed Marbridge data and reports and unanimously concluded that mining ceased in mineralization and the four nickel sulphide zones remain open to expansion by drilling along strike and
down-dip/plunge.

Following closure of the Marbridge Mine in 1968, exploration in the Somanike area has been largely dormant. Historical exploration programs focused on magmatic nickel sulphide deposits, such that the majority of assays were for Ni and very limited Cu. Somanike was not investigated by modern geophysical surveys until 2014, when a VTEM survey was flown over the entire Property with the objective of identifying nickel-copper sulphide targets for drill testing. Compilation of all historical drill data in conjunction with the 2014 VTEM survey identified numerous targets and exploration programs were designed to test for the presence of significant nickel and copper sulphides.

The technical information in this news release has been reviewed and approved by Alexandr Beloborodov, P.Geo., independent geological consultant to the Company, who is a Qualified Person under the definitions established by National Instrument 43‐101.

Class 1 Nickel and Technologies Limited is a Mineral Resource Company focused on the development of its 100% owned Alexo-Dundonald Property, a portfolio of komatiite hosted magmatic nickel-copper-cobalt sulphide Mineral Resources located near Timmins, Ontario. The Company also owns the Somanike komatiite-hosted nickel-copper sulphide property in Quebec, which includes the famous Marbridge Nickel Mine.