New Found Gold Corp.  (TSX-V: NFG) (NYSE-A: NFGC) is pleased to announce assay results from 23 diamond drill holes designed to expand the high-grade gold mineralization at the Golden Joint and Lotto discoveries located within a 1km segment of the Appleton Fault Zone north of the Keats Zone. This corridor is part of the +20km of prospective strike along the regional-scale Appleton and JBP fault zones on the Queensway project that New Found is targeting with a 400,000m drill campaign. The Queensway project comprises an approximately +1500km2 area with initial focus in areas accessed via the Trans-Canada Highway approximately 15km west of Gander, Newfoundland.

Melissa Render, P.Geo., VP Exploration for New Found, stated: “As drilling progresses along this segment of the Appleton Fault Zone, it is very apparent the role and importance of the AFZ as a crustal-scale thrust fault and likely source of the gold mineralizing fluids. All rocks in close proximity to the AFZ have the potential to host high-grade gold mineralization. It is important to note that the high-grade gold sits in structures adjacent to the AFZ within a damage zone that presents as a network of gold-bearing faults. Although the structural setting is complex, it is this complexity that is conducive to gold deposition. Identifying these key structural loci is essential for exploration success.

At Lotto for example, the current drill-defined depth and lateral continuity of the Lotto main vein of 300m x 225m is impressive, and drilling indicates that very high-grade shoots are developing where structures intersect and at distances 200m+ from the AFZ. This introduces a large prospective window surrounding this significant, regional-scale fault zone that transects the full 100+km length of the property. Exploration is working diligently to systematically drill-test this corridor whilst chasing the high-grade main veins at Lotto and Golden Joint to depth and along strike. Additionally, Sunday Zone is situated in a stratigraphic position identical to the Golden Joint Vein, in the immediate footwall to the AFZ. This structural intersection produces an important exploration target and one that we are seeing repeated along the length of the AFZ and that is currently being explored at Golden Joint.

Drilling to date has had a high success rate in intercepting high-grade gold hosted by these structures. One positive of this genetic model for high-grade gold emplacement is that the length of prospective structure to explore becomes many multiples of the strike length along the primary Appleton Fault Zone. When evaluating the over 2.6km corridor from Keats to Lotto the Company is at the very early stages of drill testing this structural network. As an orogenic gold system, the Company believes it is very probable that near surface high-grade gold mineralization will ultimately be traced to significant depth and that the extensive near surface gold almost certainly has been emplaced through a deep plumbing system following a network of fractures to depth. At this early stage in exploration drilling, work will focus on near surface targets, while dedicating a portion of the drill allocation to trace high-grade gold mineralization to depth.”

Mineralization at the Queensway Project is hosted by a fold-thrust sequence of northeast-striking, steeply dipping turbiditic sedimentary rocks deposited and deformed during the closure of the Iapetus Ocean and subsequent continent-continent collision. During this prolonged period of continued shortening, at least two regional-deformation zones developed and include the Appleton and JBP fault zones. The AFZ is interpreted to be a significant, deep-seated thrust fault, that strikes southwest across the full 100km+ length of the property and is likely the main conduit for the gold mineralizing fluids, much like the Cadillac-Larder Lake Fault Zone in the Abitibi.

As a result of progressive deformation, the brittle host stratigraphy developed an extensive network of gold-bearing fault zones enveloping the AFZ, the extents of which are not yet known. This structural relationship is well illustrated in Figure 4 and demonstrates the currently defined vein and associated fault orientations based on structural interpretation and drilling to date along the 1km corridor from Golden Joint to Lotto. Higher-grades and widths of gold mineralization occur in areas where there was greater mineralizing fluid flow such as at structural intersections, at dilational openings within fault structures, and along lithological contacts where breakage occurs due to rheological differences in the compressional strength of contrasting sedimentary rock units.

The Company’s current interpretation is that the high-grade gold mineralization being drilled at Queensway was deposited by gold mineralizing fluids penetrating this highly fractured and deformed meta-sedimentary sequence forming an extensive mineralized corridor surrounding the deep crustal-scale fault network that forms the Appleton Fault Zone. A significant amount of the high-grade gold mineralization is interpreted to be epizonal in nature, having been emplaced when tectonic movements resulted in the explosive tapping of deep gold-rich magmatic fluids that rapidly precipitated gold as they migrated towards surface.

Mineralization at Golden Joint occurs in two known structural settings, in the immediate footwall to the AFZ (Golden Joint) and in a more distal setting that is spatially associated with a thick, northeast striking greywacke unit (Golden Joint Hanging Wall (‘HW’). The main vein at Golden Joint trends north-south, is a steeply west dipping massive quartz vein with stylolitic and brecciated vein phases and occurs in the footwall shales adjacent to the AFZ (Figures 4 and 5). This vein is associated with a brittle fault zone and other vein arrays that are currently being modelled. Drilling to date indicates that there is a steep plunging high-grade domain; the current interpretation is that this zone of significant high-grade gold is occurring at the intersection between the AFZ and the main vein at Golden Joint. Modelling also suggests that intersections of the main vein at Golden Joint with other vein orientations is also producing zones of substantial gold enrichment. The Golden Joint HW Zone occurs within and along the contacts of a massive bed of greywacke. Mineralization tends to be characterized by stockwork-style veining that generally trends in an east-northeast orientation and dips moderately to the southeast. Significant deformation is also observed in this area and continued modelling is working to better understand this domain for targeted follow-up. Drilling will continue to follow and expand the domain of high-grade gold within the main vein at Golden Joint while targeting structural intersections along its projection in addition to drilling deeper extensions of the HW Zone.

A majority of the exploration drilling to date at Lotto has been focused on testing the main vein. Like the Golden Joint main vein, it too strikes north-south but is steeply dipping to the east. This specific vein also occurs approximately 200m east of the AFZ, has been defined to a vertical depth of 225m and over a length of 200m (Figures 5 and 6). The Lotto main vein is spatially associated with a brittle-fault zone and is developed in close proximity to a narrow bed of greywacke. The lotto vein is often massive and vuggy with localized domains of brecciation. There is also an apparent high-grade domain that is interpreted to steeply plunge to the northeast. The vein at this location crosscuts the thin bed of greywacke but also, the presence of late brecciated vein phases suggest that there is a fault intersection at this location. Continued exploration drilling in this area will focus on expanding the Lotto main vein high-grade domain but will also shift to targeted exploration in the highly-prospective domain between the Lotto main vein and the AFZ. The Sunday Zone indicates the potential for expansion and repetition of vein intersections in the footwall to the AFZ and will be the focus for future drill testing.

Approximately 38% of the planned 400,000m program at Queensway has been drilled to date with approximately 21,400m of the core with pending assay results. Eleven core rigs are currently operating and New Found is targeting an increase in the drill count to 14 rigs.

True widths of the intercepts reported in this press release have yet to be determined but are estimated to be 70% to 90% of reported core lengths. Infill veining in secondary structures with multiple orientations crosscutting the primary host structures are commonly observed in drill core which could result in additional variability in true width. Assays are uncut, and calculated intervals are reported over a minimum length of 2 meters using a lower cut-off of 1.0 g/t Au. All HQ split core assays reported were obtained by either complete sample metallic screen/fire assay or standard 30-gram fire-assaying with ICP finish at ALS Minerals in Vancouver, British Columbia, or by entire sample screened metallic screen fire assay at Eastern Analytical in Springdale, Newfoundland. The complete sample metallic screen assay method is selected by the geologist when samples contain coarse gold or any samples displaying gold initial fire assay values greater than 1.0 g/t Au. Drill program design, Quality Assurance/Quality Control and interpretation of results is performed by qualified persons employing a Quality Assurance/Quality Control program consistent with National Instrument 43-101 and industry best practices. Standards and blanks are included with every 20 samples for Quality Assurance/Quality Control purposes by the Company as well as the lab. Approximately 3% of sample pulps are sent to secondary laboratories for check assays.

The technical content disclosed in this press release was reviewed and approved by Greg Matheson, P. Geo., Chief Operating Officer, and a Qualified Person as defined under National Instrument 43-101. Mr. Matheson consents to the publication of this news release dated March 24, 2022, by New Found. Mr. Matheson certifies that this news release fairly and accurately represents the information for which he is responsible.

New Found holds a 100% interest in the Queensway Project, located 15km west of Gander, Newfoundland, and just 18km from Gander International Airport. The project is intersected by the Trans-Canada Highway and has logging roads crosscutting the project, high voltage electric power lines running through the project area, and easy access to a highly skilled workforce. The Company is currently undertaking a 400,000m drill program at Queensway, now approximately 38% complete. The Company is well funded for this program with a current working capital balance of approximately $111 million.

Figure 1. Photo of mineralization from NFGC-21-462 at Golden Joint at approximately 326.5m down hole depth. Note that these photos are not intended to be representative of gold mineralization in hole NFGC-21-462. (Photo: Business Wire) 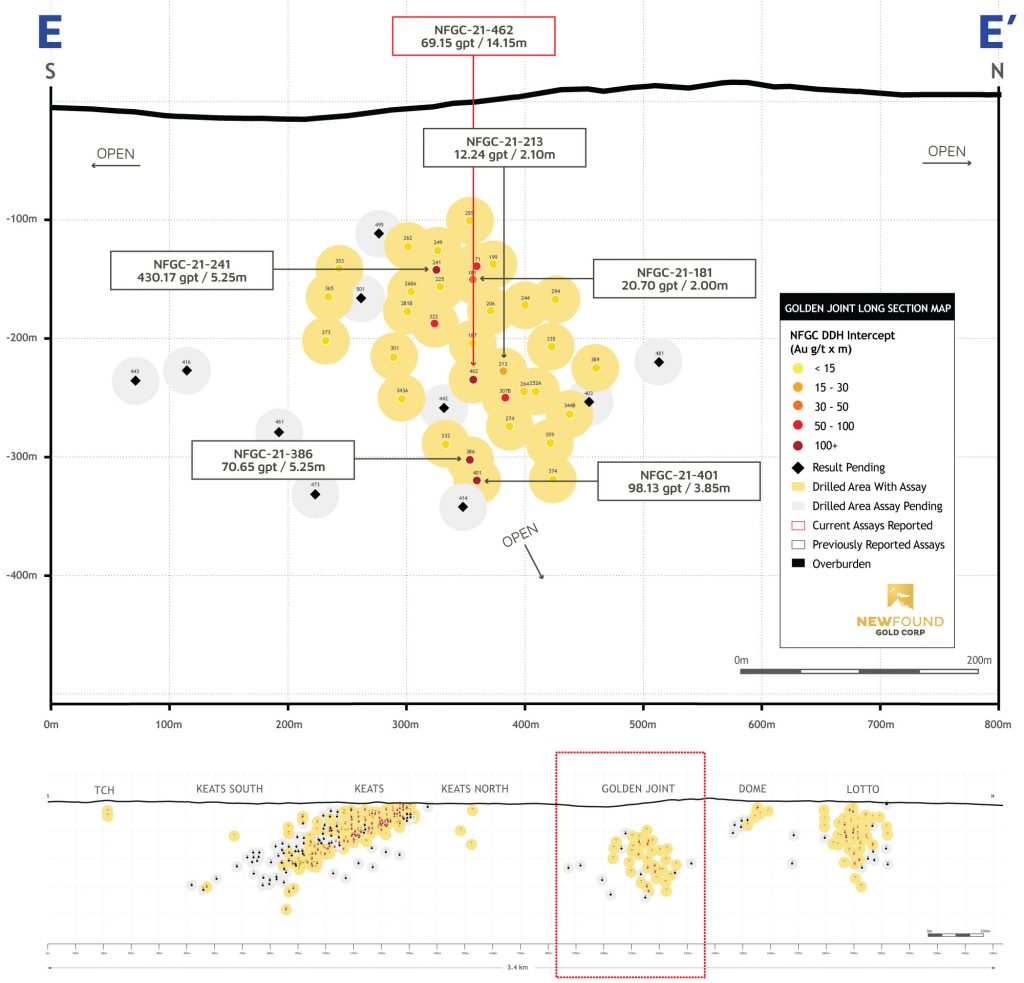 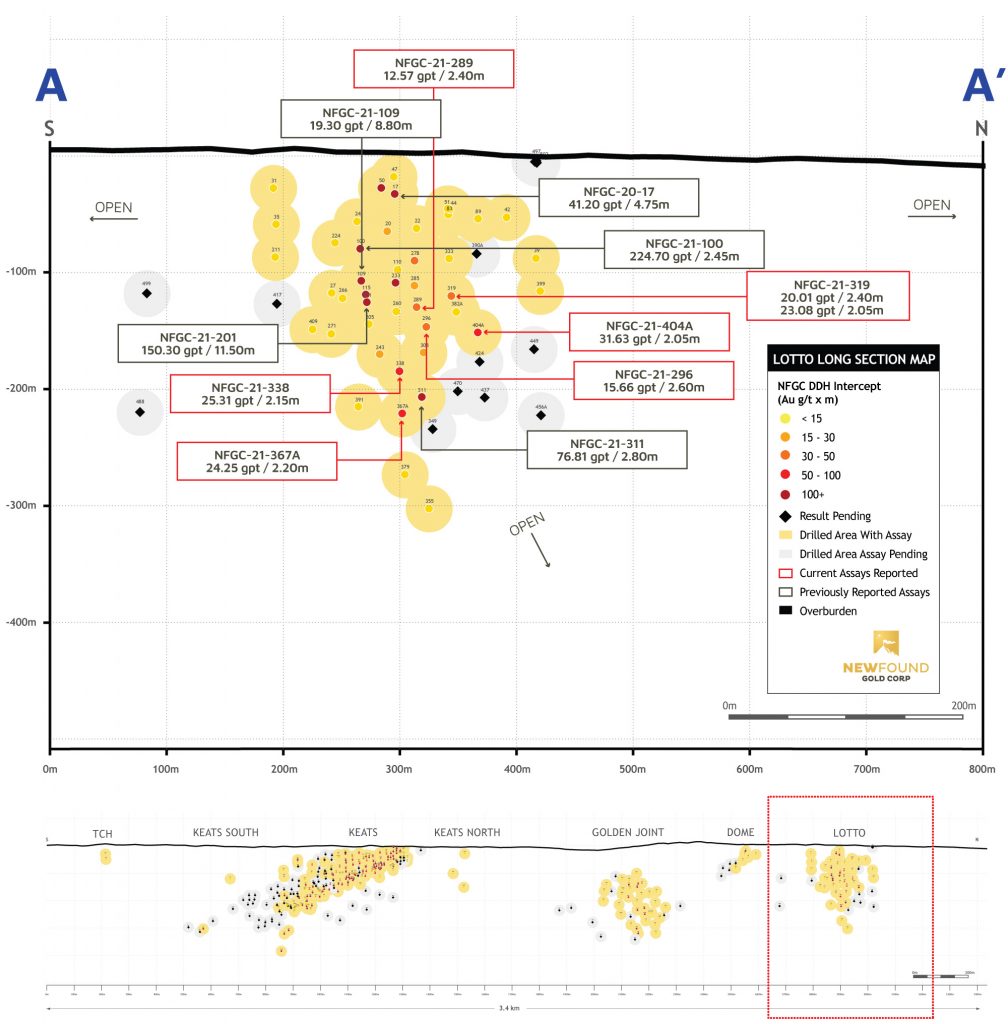 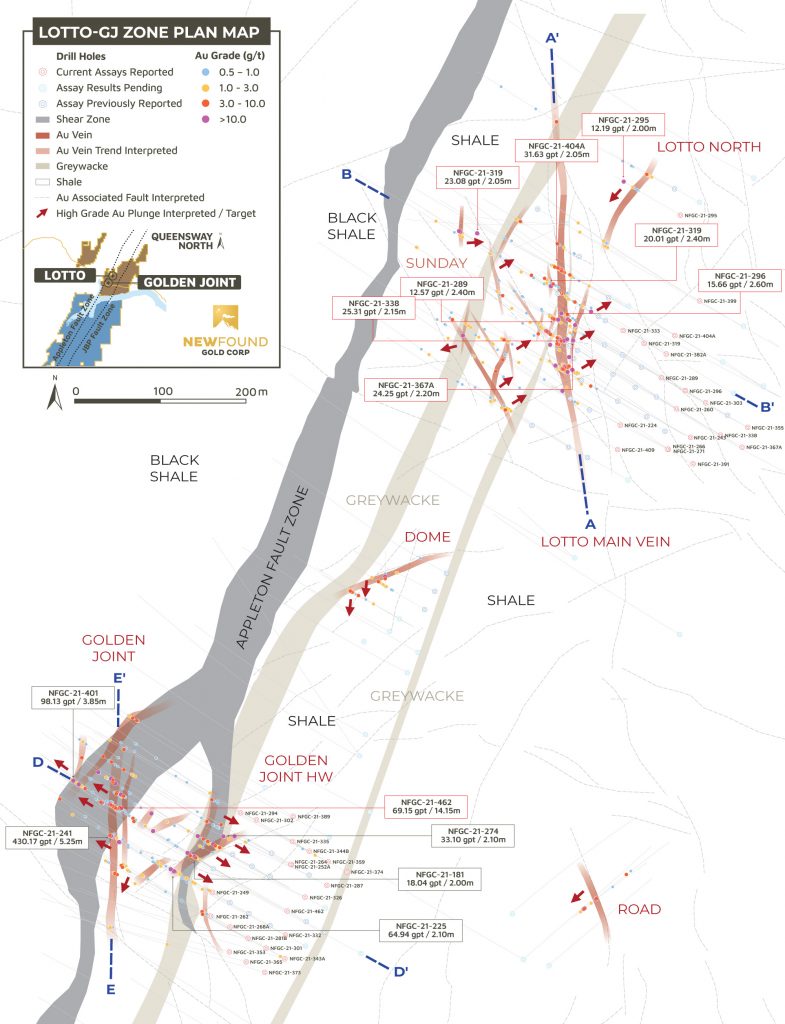