Denis Laviolette, President of New Found, stated: “Drilling to date at Keats is delineating a high grade, near surface zone with significant extent and size potential. We are continuing to step out on it to the north, to the south, and to depth. At the Lotto Zone 2 km north of Keats, step-outs from hole NFGC-20-17  (41.2 g/t Au over 4.75m and 25.4 g/t Au over 5.15 m, see the Company’s October 2, 2020 news release) appear to be delineating a new zone of near surface, high-grade gold. The Company believes that historical exploration at the Knob prospect located 2 km south of Keats which includes a historical resource outlined by Noranda has significant room for expansion and drilling is scheduled to start on this target shortly.  Additional drills are being mobilized to the site to double the rig count from four to eight with the increase focused on exploring some of the more than fifteen high-grade gold zones along the Appleton and JBP faults and the many kilometers of strike along these fault zones that have not been drill tested to date. Numerous high-grade boulders and float samples located along the parallel JBP fault, 5 km to the east have yet to be sourced and recent geophysical interpretations are pointing toward a number of targets along a twelve kilometer section of this fault that warrant drilling.” 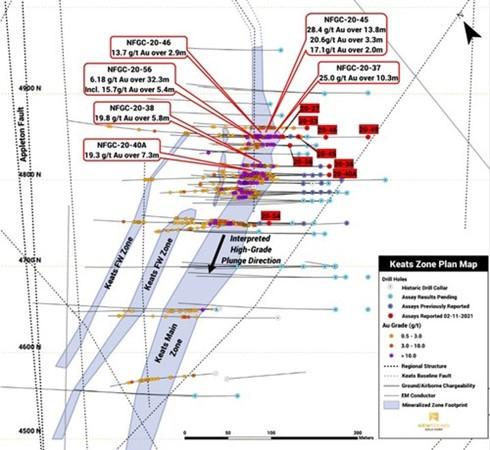 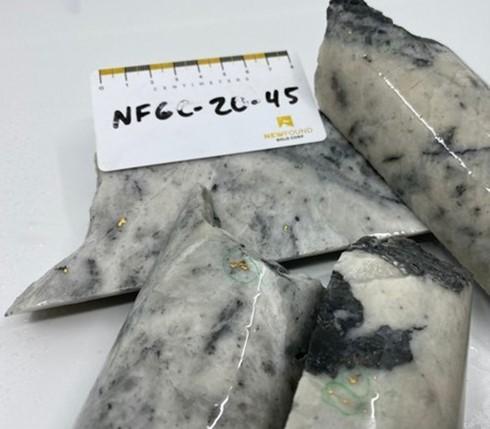 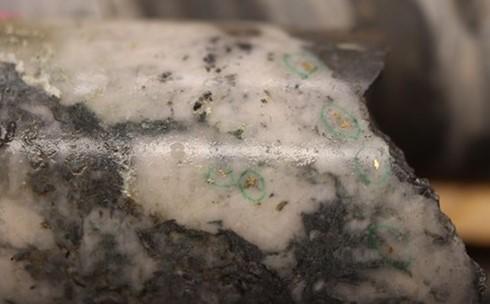 True widths of the new exploration intercepts reported in this press release have yet to be determined but are estimated to be 70% to 80% of reported core lengths. Assays are uncut, and calculated intervals are reported over a minimum length of 2 meters using a lower cutoff of 1.0 g/t Au. All HQ split core assays reported were obtained by either whole sample metallic screen/fire assay or standard 30-gram fire-assaying with ICP finish at ALS Minerals in Vancouver, British Columbia. The whole sample metallic screen assay method is selected by the geologist when samples contain coarse gold or any samples displaying gold initial fire assay values greater than 1.0 g/t Au. Any samples that returned over-limit values (>100 g/t silver) were analyzed with the Ag-OG62 procedure (Ag by HF-HNO3 -HClO4 digestion with HCl leach, ICP-AES or AAS finish). Drill program design, Quality Assurance/Quality Control and interpretation of results is performed by qualified persons employing a Quality Assurance/Quality Control program consistent with National Instrument 43-101 and industry best practices. Standards and blanks are included with every 20 samples for Quality Assurance/Quality Control purposes by the Company as well as the lab. Approximately 5% of sample pulps are sent to secondary laboratories for check assays.

New Found holds a 100% interest in the Queensway Project, located 15 km west of Gander, Newfoundland, and just 18 km from Gander International Airport. The project is intersected by the Trans-Canada Highway and has logging roads crosscutting the project, high voltage electric power lines running through the project area, and easy access to a highly skilled workforce. With working capital of approximately C$72M the Company is well financed to continue its current 200,000m program, with a planned increase from the current four drills to eight drills in Q1, 2021. New Found has a proven capital markets and mining team with major shareholders including Palisades Goldcorp (33%), Eric Sprott (18%), Novo Resources (11%), Rob McEwen (7%), other institutional ownership (8%), and management, directors, and insiders (4%).