Melissa Render, VP Exploration for New Found stated: “Today’s results affirm the significance of the Keats West discovery and indicate that drilling has locked onto a new structure with proven potential. The degree of faulting, veining, and pairing of both low and high-grade gold mineralization gives us great enthusiasm as we continue exploring this region. A strong intercept of 18.6 g/t Au over 15.95m, starting at surface, with current true widths estimated at 90-95%, and contained within a shallowly dipping structure that can be explored with short holes produces a long list of positives for this new high-grade prospect. The discovery of high-grade gold mineralization west of the Appleton fault is a relatively new advancement in addition to identifying an associated strong, low-grade gold domain. This only furthers our excitement as we continue to explore new target areas along this +9.45km segment, west of the AFZ.”

Approximately 78% of the planned 400,000m program at Queensway has been drilled to date with ~67,373m of the core still pending assay results.

True widths of the intercepts reported in this press release have yet to be determined but are estimated to be 90% to 95% of reported core lengths. Infill veining in secondary structures with multiple orientations crosscutting the primary host structures are commonly observed in drill core which could result in additional variability in true width. Assays are uncut, and composite intervals are calculated using a minimum weighted average of 1 g/t Au diluted over a minimum core length of 2m with a maximum of 2m consecutive dilution. Included high-grade intercepts are reported as any consecutive interval with grades greater than 10 g/t Au.

All drilling recovers HQ core. Drill core is split in half using a diamond saw or a hydraulic splitter for rare intersections with incompetent core.

A geologist examines the drill core and marks out the intervals to be sampled and the cutting line. Sample lengths are mostly 1.0 meter and adjusted to respect lithological and/or mineralogical contacts and isolate narrow (<1.0m) veins or other structures that may yield higher grades.

Technicians saw the core along the defined cutting line. One-half of the core is kept as a witness sample and the other half is submitted for analysis. Individual sample bags are sealed and placed into totes, sealed and marked with the contents.

NFG submits samples for gold determination by fire assay to ALS Canada Ltd. and by photon assay to MSALABS since June 2022. ALS and MSA operate under a commercial contract with New Found.

Drill core samples are also submitted to MSA in Val-d’Or, Quebec. MSA operates numerous laboratories worldwide and maintains ISO-17025 accreditation for many metal determination methods. Accreditation of the photon assay method at the MSA Val D’Or laboratory is in progress.

At ALS, the entire sample is crushed to approximately 70% passing 2mm. A 3,000-g split is pulverized. “Routine” samples do not have visible gold identified and are not within a mineralized zone. Routine samples are assayed for gold by 30-g fire assay with an inductively-couple plasma spectrometry finish. If the initial 30-g fire assay gold result is over 1 g/t, the remainder of the 3,000-g split is screened at 106 microns for screened metallics assay. For the screened metallics assay, the entire coarse fraction (sized greater than 106 microns) is fire assayed and two splits of the fine fraction (sized less than 106 microns) are fire assayed. The three assays are combined on a weight-averaged basis. Samples that have VG identified or fall within a mineralized interval are automatically submitted for screened metallic assay for gold

At MSA, the entire sample is crushed to approximately 70% passing 2mm. For “routine” samples that do not have VG identified and are not within a mineralized zone, the samples are riffle split to fill two 450g jars for photon assay. The assays reported from both jars are combined on a weight-averaged basis. If one of the jars assays greater than 1 g/t, the remaining crushed material is weighed into multiple jars and are submitted for photon assay.

For samples that have VG identified or are within a mineralized zone, the entire crushed sample is weighed into multiple jars and are submitted for photon assay. The assays from all jars are combined on a weight-averaged basis.

All samples prepared at ALS or MSA are also analyzed for a multi-element ICP package (ALS method code ME-ICP61) at ALS Vancouver.

Drill program design, Quality Assurance/Quality Control and interpretation of results are performed by qualified persons employing a rigorous Quality Assurance/Quality Control program consistent with industry best practices. Standards and blanks account for a minimum of 10% of the samples in addition to the laboratory’s internal quality assurance programs.

New Found’s quality control program also includes submission of the second half of the core for approximately 5% of the drilled intervals. In addition, approximately 1% of sample pulps for mineralized samples are submitted for re-analysis to a second ISO-accredited laboratory for check assays.

The Company does not recognize any factors of drilling, sampling or recovery that could materially affect the accuracy or reliability of the assay data disclosed.

New Found holds a 100% interest in the Queensway Project, located 15km west of Gander, Newfoundland and Labrador, and just 18km from Gander International Airport. The project is intersected by the Trans-Canada Highway and has logging roads crosscutting the project, high voltage electric power lines running through the project area, and easy access to a highly skilled workforce. The Company is currently undertaking a 400,000m drill program at Queensway, now approximately 78% complete. The Company is well funded for this program with cash and marketable securities of approximately $55 million as of November 2022. 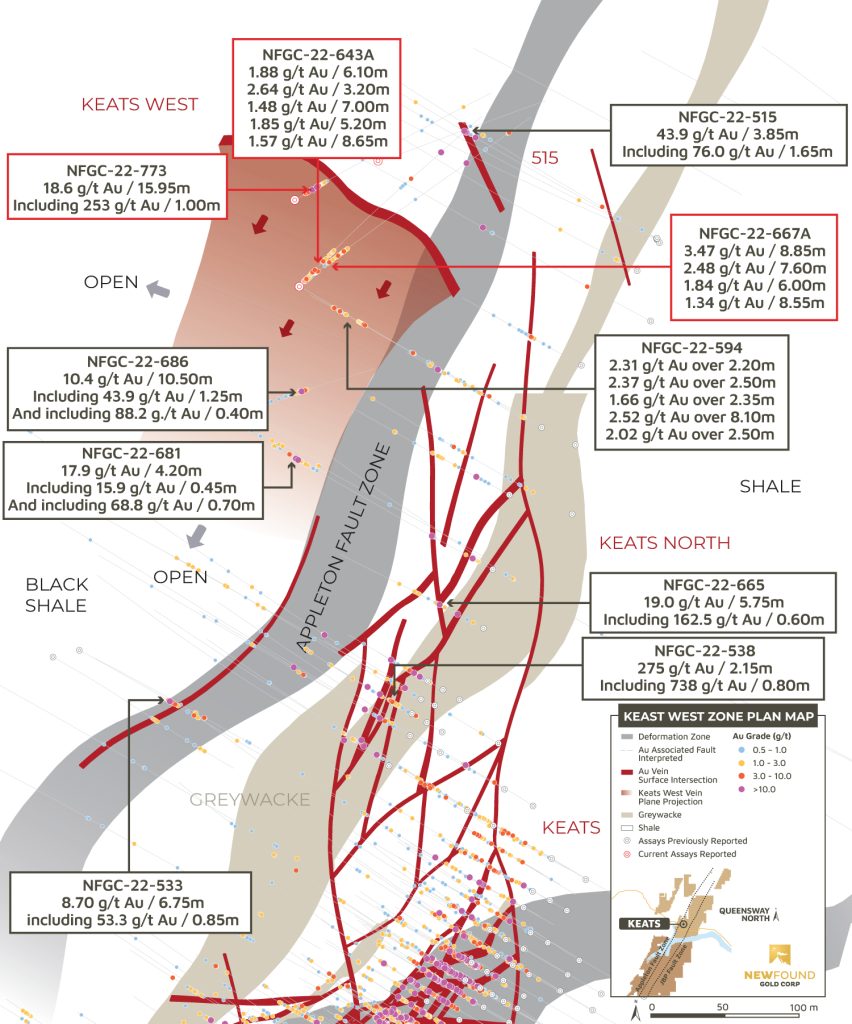 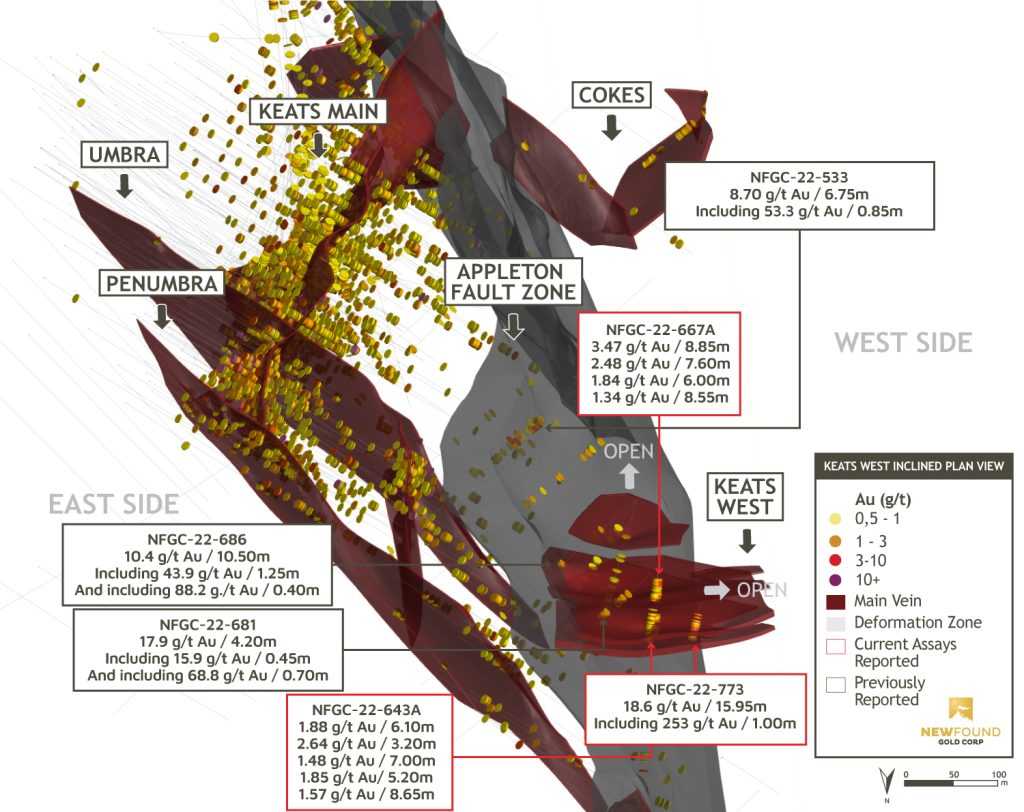 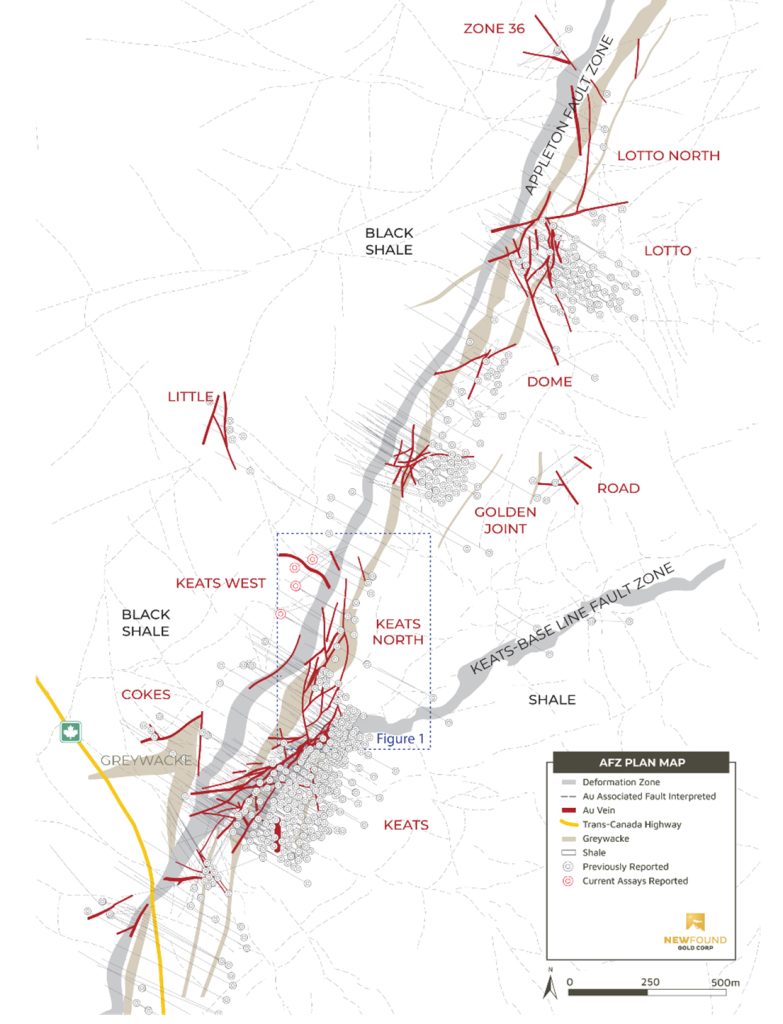