Greg Matheson, P.Geo., Chief Operating Officer of New Found, stated: “Veining observed in drill holes to date at Keats is characterized by quartz-sulfide mineralization displaying thicknesses typically in the 20m to 40m range with good continuity between holes. Intervals displaying visible gold have consistently been encountered within these broader vein intervals. Assays received to date have typically returned high-grade results albeit with some variability in thickness and grades likely due to the nugget effect. The Keats Zone has been confirmed by geophysics, surface sampling, and wide spaced drilling over more than 300m of strike and remains open along strike in both directions and to depth.  Our current drill program continues to step-out and test this zone laterally and to depth.”

Note that the exact orientation of the veins is uncertain but believed to be steeply dipping thus implying true widths of the high-grade zone to be in the 70% to 80% range of reported drill lengths.

True widths of the new exploration intercepts reported in this press release have yet to be determined but are estimated to be 70% to 80% of reported core lengths. Assays are uncut, and calculated intervals are reported over a minimum length of 2 meters using a lower cutoff of 1.0 g/t Au. All HQ split core assays reported were obtained by either whole sample metallic screen/fire assay or standard 30-gram fire-assaying with ICP finish at ALS Minerals in Vancouver, British Columbia. The whole sample metallic screen assay method is selected by the geologist when samples contain coarse gold or any samples displaying gold initial fire assay values greater than 1.0 g/t Au. Drill program design, Quality Assurance/Quality Control and interpretation of results is performed by qualified persons employing a Quality Assurance/Quality Control program consistent with National Instrument 43-101 and industry best practices. Standards and blanks are included with every 20 samples for Quality Assurance/Quality Control purposes by the Company as well as the lab. Approximately 5% of sample pulps are sent to secondary laboratories for check assays.

New Found holds a 100% interest in the Queensway Project, located 15 km west of Gander, Newfoundland, and just 18 km from Gander International Airport. The project is intersected by the Trans-Canada Highway and has logging roads crosscutting the project, high voltage electric power lines running through the project area, and easy access to a highly skilled workforce. With working capital of approximately C$61.5 million the Company is well financed for aggressive exploration with an initial planned drill program of 100,000 meters. New Found has a proven capital markets and mining team with major shareholders include Palisades Goldcorp (33%), Eric Sprott (18%), Novo Resources (11%), Rob McEwen (7%), other institutional ownership (8%), and management, directors and insiders (4%). Approximately 65% of the Company’s issued and outstanding shares are subject to escrow or 180-day lock up agreements. 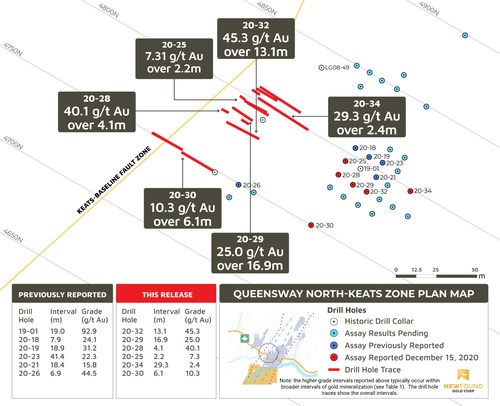 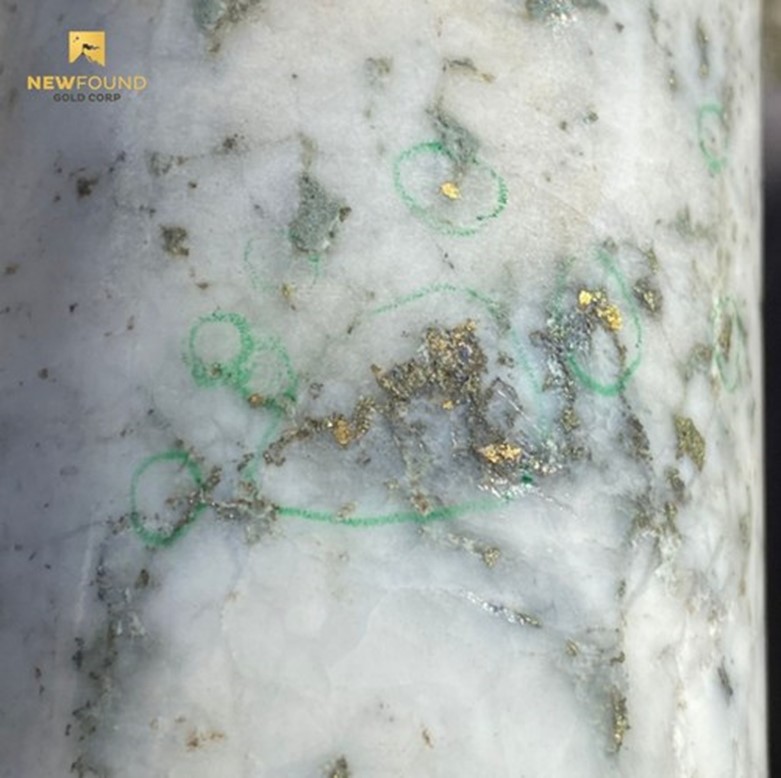