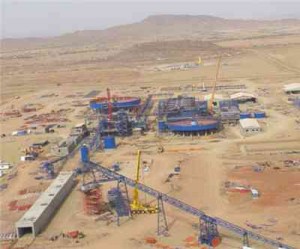 Nevsun Resources Ltd. (TSX:NSU)(NYSE MK:NSU) is pleased to report the copper flotation circuit construction is complete at the Company’s Bisha mine in Eritrea. The copper expansion project was completed on time and will be under budget. The Company also reports that the decision has been made to process the precious metal rich pyrite sands by flotation prior to copper supergene ore flotation.

“The successful completion on time and under budget of the new copper flotation plant, clearly demonstrates our ability to deliver capital projects, even in the face of the current capital cost challenge our industry faces”, stated Cliff Davis, President and CEO of Nevsun. “This additional pyrite sand material and the additional $100 million revenue proves once again that Bisha is a tremendous deposit.”

Construction of the copper expansion project is complete. Wet commissioning tests are finished. Bisha has started hot commissioning using pyrite sand to a produce precious metals concentrate. Some relatively minor infrastructure will be completed over the next few months and final project costs will be reported in due course.

The pyrite sands will be processed through the copper rougher flotation circuit and the concentrate thickener and pressure filters. The crushing/grinding circuit and the tails disposal infrastructure remains the same as the current carbon-in-leach (CIL) gold plant. The cleaner flotation cells and regrind mills, while complete and in place, will only be commissioned using supergene ore starting in September 2013, after completion of pyrite sand processing.

We estimate that the pyrite sand will yield a PM concentrate containing over 20,000 ounces gold and over 2 million ounces silver. In addition, the flotation tails from the pyrite sand processing will be directed into the CIL circuit where an additional estimated 30,000 ounces of gold will be recovered in dore in Q3 2013. The current plan is to use this PM concentrate for future blending into the copper concentrate over the subsequent 6 to 12 months.

At $1,400 per ounce gold and $22 per ounce silver, the potential revenue to be realized from this material alone is believed to exceed $100 million over the next 6 to 12 months. The pyrite sand ore was never included in the latest mineral reserve estimate due to its unconsolidated nature and inability to core drill and sample assay. The economics of processing this additional ore through the new flotation plant more than justifies the slight delay to originally planned start of copper concentrate production.

Based upon the above, 2013 guidance is revised to 110,000 ounces gold produced (excluding the 25,000 to 30,000 ounces in the northeast layback but including the 30,000 ounces from the pyrite sand flotation tails) and between 30 to 50 million pounds of contained copper in concentrate. After ramp-up of copper supergene ore is completed in Q1 2014, the Bisha operation is expected to produce in the order of 200 million pounds of copper on an annualized basis at less than $1.00 per pound cash cost.

The Company has been advised that after close of trading on June 21, 2013, Nevsun will be removed from NYSE Arca Gold Miners Index because Nevsun’s revenue will be switching to majority copper from majority gold during 2013. Nevsun has been advised that the Van Eck Gold Miners ETF is required to sell its position in Nevsun since the ETF tracks the index. During March of this year a similar event occurred when Nevsun was deleted from the Van Eck’s proprietary Market Vectors Junior Gold Miners index, at which time the company experienced very significant trading volumes and was essentially price neutral.

Nevsun Resources Ltd. is a Vancouver-based mining company with an operating mine in Eritrea. Nevsun’s 60%-owned Bisha Mine commenced commercial gold production in February 2011 and is transitioning to copper/gold production in H2 2013. Management expects the Bisha Mine will rank as one of the highest grade open pit base metal deposits in the world.