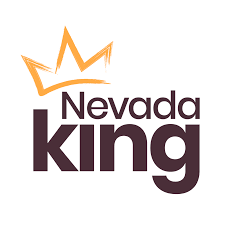 Cal Herron, P.Geo., Exploration Manager of Nevada King stated, “The 2022 drill program was designed with the objectives of both expanding the current Atlanta resource and also to target potential of areas of high-grade gold mineralization. Today’s announcement is pivotal, demonstrating that the areas directly south and southeast of the pit, which have remained largely ignored by past drilling, are primed for resource expansion, and are returning higher-grades and thicknesses than seen in past drilling in the vicinity. The initial drilling has also discovered higher-grade zones including high grade intervals located proximate to a tuff dike breccia unit as well as along high angle faults cutting the silica breccia horizon. The close association between high grade gold mineralization and the strongly altered, and in places mineralized, felsic tuff dike breccia unit raises a number of possibilities for intersecting significantly higher gold grades along the southern extension of the AMFZ as documented by historical holes located west of the open pit and generally below 200m depth.

The Company is well funded with cash of approximately $19.2-million as of September 2022.

The Atlanta Mine is a historical gold-silver producer with a NI 43-101 compliant pit-constrained resource of 460,000 oz Au in the measured and indicated category (11.0M tonnes at 1.3 g/t) plus an inferred resource of 142,000 oz Au (5.3M tonnes at 0.83 g/t). See the NI 43-101 Technical Report on Resources titled “Atlanta Property, Lincoln County, NV” with an effective date of October 6, 2020, and a report date of December 22, 2020, as prepared by Gustavson Associates and filed under the Company’s profile on SEDAR (www.sedar.com).

NI 43-101 Mineral Resources at the Atlanta Mine 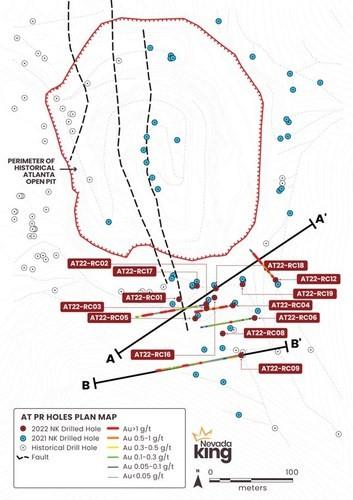 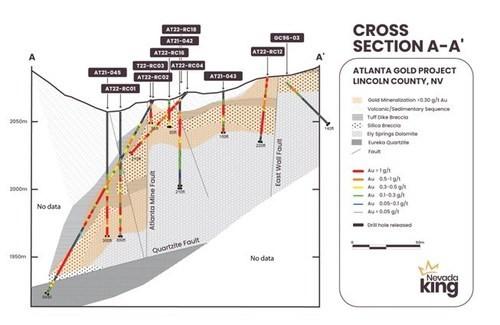 Figure 2. Section A-A’ across the southern end of the historical Atlanta pit showing the “roll-over” in dip of the mineralized zone from horizontal on the east to 45o on the west. The Atlanta Mine Fault occurs at the hinge of this roll-over point. Note the close relationship between felsic tuff dike breccia bodies and Au mineralization. Additional drilling is planned to follow-up on the higher grade intercepts in AT22-RC02 and AT22-RC12. (CNW Group/Nevada King Gold Corp.) 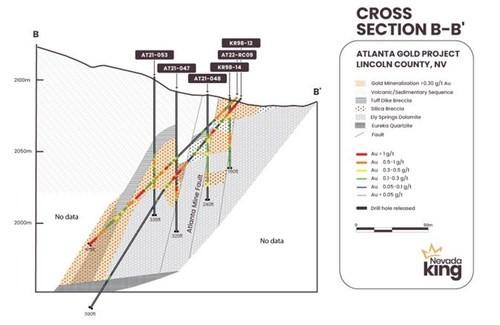 Figure 3. Section B-B’ across the southern extension of the Atlanta Mine Fault Zone 150m south of the historical Atlanta pit, showing same dip roll-over in the mineralized zone and same Au-tuff dike breccia association as seen in Figure 2 to the north. More drilling is planned west of AT21-053 to follow-up on the intercept in AT22-RC09. (CNW Group/Nevada King Gold Corp.)