Nevada Copper Receives All Permits for Stage 1 Underground Mine

Nevada Copper Receives All Permits for Stage 1 Underground Mine 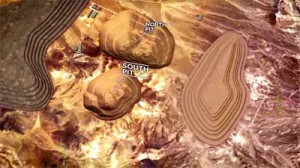 With all permits in hand, Nevada Copper will receive a further US$15 million under the US$200 million RK Mine Finance senior secured loan facility and copper concentrate off-take agreements. A total of US$51 million will be received from this facility with a further US$149 million to be received by Q2-2014 on the completion of certain other project milestones, including completion of the 24 foot diameter, 2,140 foot deep production sized shaft.

The Nevada Department of Environmental Protection issued the Air Quality Operating Permit on September 5, 2013. On July 25, 2013, NDEP published the 30-day Notice of Proposed Action to issue this permit. This 30-day public review was completed on August 30, 2013. During the 30-day comment period, no comments were received. The Water Pollution Control Permit and Reclamation Permit were also previously issued with no public comments.

Giulio Bonifacio, President and CEO, stated: “This is a very significant milestone for Nevada Copper, as the path is now clear for us to build and operate our Stage 1 underground operation. We now have a fully permitted project that we will advance to commercial production in 2015. We are very pleased with the diligence of NDEP staff to review our applications and issue permits for Pumpkin Hollow in a timely manner. We will now move forward in Q4 with the execution of both an equipment lease and precious metal stream which when combined with sunk costs and our current treasury will provide substantially all the project funding required while allowing us to achieve the most significant milestone since the company was formed in late 2006 – a fully funded and permitted project.”

Other activities on the project are moving forward at an accelerated pace. These include building our core team of staff and contractors; continued development of the 24 foot diameter, 2,140-foot deep production-sized shaft; detailed engineering on the 6,500 ton per day mill and concentrator for underground ore; preparation of construction bid documents and detailed underground mine planning.

Further to our press release dated April 23, 2013 the Company is currently completing a standalone, Stage 2 open pit feasibility study. The feasibility study contemplates mining the Western open pittable deposits, includes the recently increased mineral resources and higher throughput production rates in the range of 70,000 to 75,000 tons/day. TetraTech, an industry leading international engineering firm was engaged to complete the feasibility study. Feasibility results are targeted for release on or before October 4, 2013.

For purposes of permitting the Stage 2 Open Pit operation we continue to work with the Nevada Congressional delegation to pass the Lyon County Economic Development Bill in order to accelerate development of the Stage 2 open pit operation.

The Senate version of this bill (S. 159) has been reported out of the Senate Energy and Natural Resources Committee. Senator Reid and Senator Heller are working to include this bill in an upcoming floor vote. The identical House version of the bill (H.R. 696) is awaiting action in the House Natural Resources Committee, after which it can be voted on the floor of the House. Lyon County, the City of Yerington and Nevada Copper are supporting the Congressional delegation and are confident this bill will be passed in 2013.