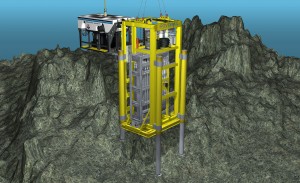 Nautilus Minerals Inc. (TSX:NUS) (OTCQX:NUSMF) announces that the Company and the Independent State of Papua New Guinea have today signed an agreement enabling the Solwara 1 Project to move forward toward production with the full support of the State.
Under the Agreement, the State shall take an initial 15% interest in the Project. The State has the option to take up to a further 15% interest within 12 months of the Agreement becoming unconditional. The State has paid Nautilus a non-refundable deposit for its initial 15% interest of US$7,000,000.
The Agreement is conditional upon the State, (through a subsidiary of Petromin PNG Holdings Limited securing by 31 July 2014, the funding for the State’s 15% share of the capital required to complete the development phase of the Project up to first production, being US$113,000,000 (excluding the deposit). These funds will be placed in escrow until Nautilus satisfies the conditions for their release. The funds will be released to Nautilus, and an unincorporated joint venture between the parties for the ongoing operation of the Project shall be formed, if within 6 months of the funds being placed in escrow Nautilus secures the charter of a Production Support Vessel and secures for the State certain intellectual property rights. After first production, Petromin’s subsidiary will contribute funds in proportion to its interest.
If the conditions of the Agreement are satisfied and the State completes the purchase of its 15% interest in the Project, then the Arbitration concerning Nautilus’ claim for damages related to the termination of the State Equity Option Agreement dated 29 March 2011, shall be dismissed. If the State does not complete the purchase, then the position the parties were in prior to signing the Agreement is reinstated.
Nautilus’ CEO, Mike Johnston, said the Company was pleased to have achieved an amicable resolution of its issues with the State.
“This step represents a major vote of confidence in Nautilus Minerals and the Solwara 1 Project. Through this joint venture, the State will provide a significant capital investment and will retain a direct interest in the long term success of the Project. We look forward to working closely with the State and Petromin on Solwara 1, which will generate significant economic activity within the State and the Province of New Ireland,” he said.
“The Company is now focusing its attention on securing a suitable vessel arrangement and is continuing its discussions with potential vessel partners while also undertaking a tender process with shipyards experienced in building offshore construction vessels. The Company intends to have a vessel solution in place before the end of the year,” he added.
Mr Johnston continues to have the support of the Board of Directors of Nautilus with his interim role as President and Chief Executive Officer having now been made permanent.

About Nautilus Minerals Inc.
Nautilus is the first company to explore the ocean floor for polymetallic seafloor massive sulphide deposits. Nautilus was granted the first mining lease for such deposits at the prospect known as Solwara 1, in the territorial waters of Papua New Guinea, where it is aiming to produce copper, gold and silver. The company has also been granted its environmental permit for this site.
Nautilus also holds approximately 500,000 km2 of highly prospective exploration acreage in the western Pacific; in PNG, the Solomon Islands, Fiji, Vanuatu and Tonga, as well as in international waters in the eastern Pacific.
A Canadian registered company, Nautilus is listed on the (TSX:NUS) stock exchange and (OTCQX:NUSMF). Its corporate office is in Brisbane, Australia. Its major shareholders include MB Holding Company LLC, an Oman based group with interests in mining, oil & gas, which holds a 28.00% interest, Metalloinvest, the largest iron ore producer in Europe and the CIS, which has a 20.75% holding and global mining group Anglo American, which holds a 5.95% interest