Found my way upstairs and had a smoke

And somebody spoke and I went into a dream

It’s deja vu all over again and it was kick-started a couple of trading days before PDAC. That’s when a Vancouver-based shell that was once a junior “miner” but never mined anything except the stock market announced a change of business.

This sort of thing happens all the time in a bear market. What was unusual in this particular instance was the nature of the business change: The company announced it was morphing into a medical marijuana merchant bank.

Upon receipt of the press release before market open one day in late February, I actually thought the “news” was a joke and the company’s website had been hacked. But with a little due diligence, I found it indeed was true.

As an aside, I commend this well-known, old-school Vancouver promoter for being first into the venue, as that is usually an advantage in the junior venture capital markets.

In the span of five weeks, many other juniors have gotten off on the same rush. The business of bud bubbled over for me a week ago when I received an interview request from an international news organization (Mercenary Interview, March 27, 2014). At that juncture however, there were only a dozen juniors signed up for the magic carpet ride; as of yesterday, there were 30 who have announced intentions.

The Canadian juniors trying to cash in on North America’s biggest cash crop generally have these common characteristics: Promoters with a history of failure, metal exploration projects with no merit, a recent or proposed rollback of shares, and nearly-depleted treasuries or negative working capital.

Previously, 40,000 licensed individuals in Canada were allowed to grow their own mota. But on April Fool’s Day, home-grown medicine became illegal. Under the new law, the legion of prescription potheads either has to smoke up the personal stash or show the government they have destroyed it. Going forward, they got to get their ganja from a licensed dealer or incur the wrath of the RCMP.

Luckily for the cadre of Canadian chronics, a Vancouver judge in the case of Allard et al. versus Her Majesty the Queen in Right of Canada realized the folly of this draconian measure. On March 18, he issued an injunction delaying its implementation pending trial.

I am curious how the ever-so-progressive Canucks will propose to enforce an obviously unenforceable law. May I suggest a newly-commissioned force called the RCMPP (Royal Canadian Mounted Pot Pigs)?

I also wonder about the impact on the many Vancouver street people who make a living selling part of their generous monthly medicinal marijuana allotments in the neighborhoods fringing that fine city’s high-rise financial and residential districts.

But I digress. Let’s inject a little reality into an ephemeral high.

For those readers with short-term memory loss, I recently pointed out the dot.com bubble that was blown-up on the Vancouver Stock Exchange in late 1999 and burst in early 2000 (Mercenary Musing, March 31, 2014). This occurred in the middle of a six-year bear market for a moribund junior resource sector.

Here’s a five-year chart from 1997-2002 that spans the Bre-X scandal in April 1997, the  junior resource crash, an extended range-bound period of very low market valuations, the parabolic dot.com bubble, and another range-bound but significantly higher base established afterward: 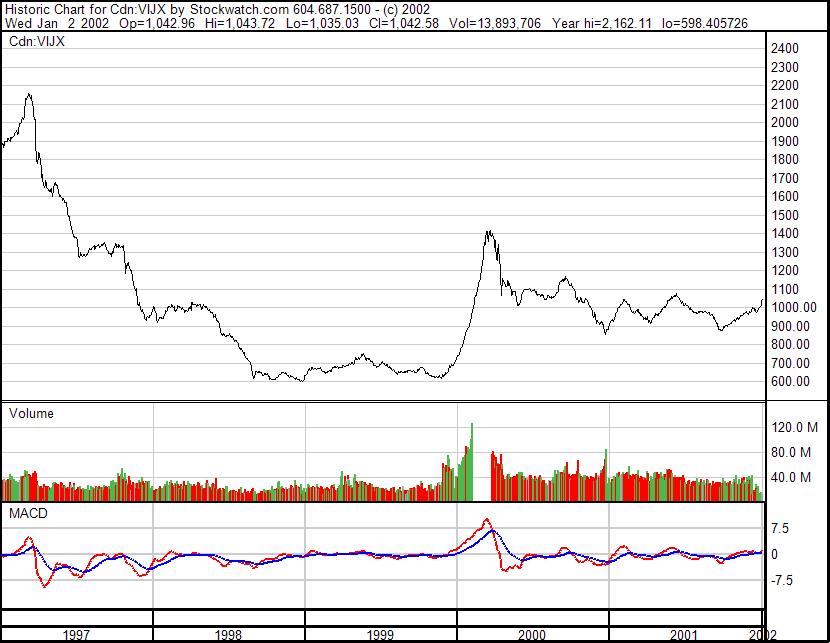 Let’s consider only the first three years on the chart above. Note the similar trading pattern to a current chart since this bear market began at PDAC in 2011: 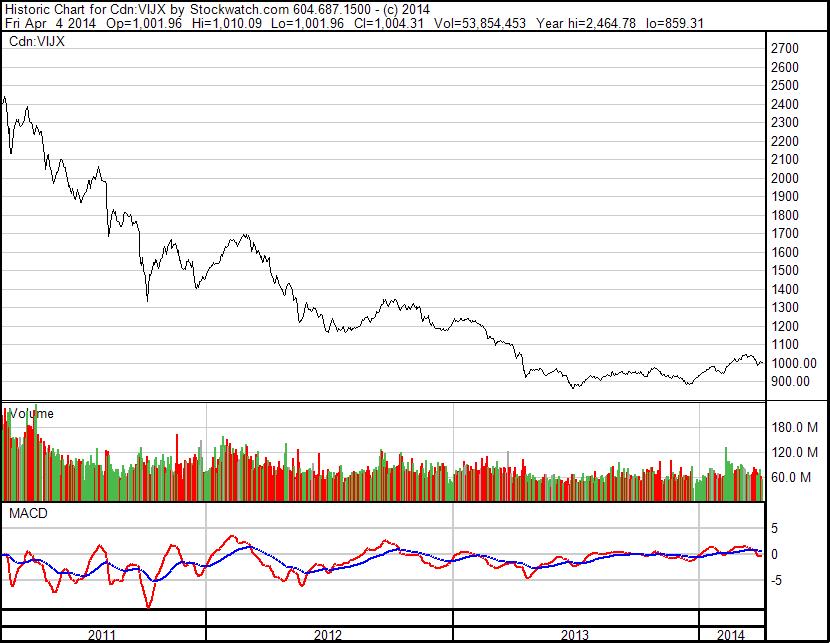 There is no doubt the on-going bear market for resource juniors has speculators primed and ready for anything that will give them a humongous hit.

But will a passel of failed exploration juniors’ movement into a Canadian version of the highly-regulated medical marijuana industry duplicate the exponential rise and fall of the Vancouver Index during the dot.com bubble?

To glean a logical answer, let’s examine other junior bubbles promulgated during the bull market run from 2003-2011, including uranium, lithium, rare earth elements, Colombia, the Yukon, and graphite. In each case, scores or even hundreds of companies got off by chasing “the next big thing”.

But look at the results:

Therefore, my answer to the question posed above is an unequivocal “no”.

In my opinion the marijuana business will attract a relatively small number of failing public companies and the overwhelming majority of those will rapidly come down and crash again. It won’t be because they lied and said they didn’t inhale. It will happen because that’s the nature of our business; all junior bubbles attract very few contenders and numerous pretenders.

That said, there is a chance a couple of these flavor-of-the -month juniors with their cannabinoid-induced green dreams may grow viable enterprises, generate revenue, and distribute the goods to shareholders.

Signs that a bear market is coming to its end often include a horde of Howe Street snakes, sharks, shysters and charlatans abandoning the sectors they know and scurrying off to find the end of a new rainbow.

My prediction is no one will stay high for very long on this bag of seeds and stems. Rest assured that in this case, I will choose to bogart my hard-earned discretionary dollars.

Disclaimer and Notice: I am not a certified financial analyst, broker, or professional qualified to offer investment advice. Nothing in any report, commentary, this website, interview, and other content constitutes or can be construed as investment advice or an offer or solicitation or advice to buy or sell stock or any asset or investment. All of my presentations should be considered an opinion and my opinions may be based upon information obtained from research of public documents and content available on the company’s website, regulatory filings, various stock exchange websites, and stock information services, through discussions with company representatives, agents, other professionals and investors, and field visits. My opinions are based upon information believed to be accurate and reliable, but my opinions are not guaranteed or implied to be so. The opinions presented may not be complete or correct; all information is provided without any legal responsibility or obligation to provide future updates. I accept no responsibility and no liability, whatsoever, for any direct, indirect, special, punitive, or consequential damages or loss arising from the use of my opinions or information. The information contained in a report, commentary, this website, interview, and other content is subject to change without notice, may become outdated, and may not be updated. A report, commentary, this website, interview, and other content reflect my personal opinions and views and nothing more. All content of this website is subject to international copyright protection and no part or portion of this website, report, commentary, interview, and other content may be altered, reproduced, copied, emailed, faxed, or distributed in any form without the express written consent of Michael S. (Mickey Fulp, MercenaryGeologist.com LLC.