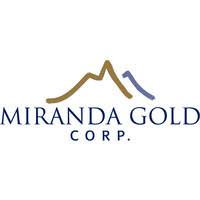 Miranda Gold Corp. (TSX-V: MAD) is very pleased to announce that it has signed an option agreement that allows Newmont Mining Corporation (NYSE: NEM) to earn an interest in Miranda’s Lyra Project in Colombia.

Lyra is in the Department of Antioquia, 120km northwest of Medellín, and a two hour drive from the city. The Lyra project comprises in 14 concession contract applications totaling 54,895 hectares covering more than 25km of the Tonusco Fault that extends south from the Buriticá vein system. 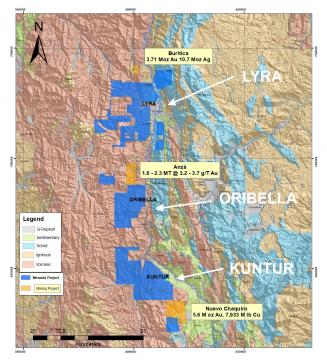 Miranda will operate a prospecting program funded by Newmont on Lyra totaling US$600,000 over 18 months or less – this is an obligation – unless the applications are converted to concession contracts before the end of 18 months.  Conversion of all applications to concession contracts will trigger a decision by Newmont as to whether they want to earn into the project – although Newmont may elect to terminate the Agreement at any time.

Upon successful conversion of the Lyra applications to concession contracts, and an election to earn into the project, Newmont shall incur a minimum of US$3,000,000 in qualifying expenditures over the course of the subsequent four years to earn-in and vest into 51% of the Lyra project (the “Initial Earn-In”).

Upon successful completion of the Initial Earn-In, Newmont and Miranda shall form a joint venture mining company whereby Newmont shall have an initial 51% interest and Miranda shall have a 49% interest. Newmont shall than have the right to earn an additional 19% interest, for an aggregate 70% interest in the joint venture, by funding an additional US$7,000,000 in qualifying expenditures over the course of the subsequent four years.

Joseph Hebert, Miranda’s Chief Executive Officer, comments that, “Miranda is pleased to partner with Newmont in conducting prospecting, and once concession contracts are granted, exploration, on the Lyra Project.  Newmont is focused on leading in social and environmental responsibility, and brings their proprietary technologies to explore the Lyra project.  Miranda believes Lyra covers an extension of the Buriticá District, and a substantial trend for Miranda and Newmont to explore.  Lyra is one three strategic and aggressive Miranda acquisitions, including Kuntur and Oribella in the Middle Cauca Belt between the world-class Buriticá and Nuevo Chaquiro gold and gold-copper deposits.”

Data disclosed in this press release have been reviewed and verified by Miranda’s Chief Executive Officer, Mr. Joseph Hebert, C.P.G., B.Sc. Geology, and Qualified Person as defined by National Instrument 43-101.

Miranda is a gold exploration company active in Colombia.  Miranda employs a prospect generator and joint venture business model.  Miranda focuses on generating projects with world-class discovery potential, and then joint ventures multiple projects to maximize the chance of discovery, while reducing economic risk and shareholder dilution.  Miranda has ongoing partnerships with IAMGold Corporation, and now with Newmont.