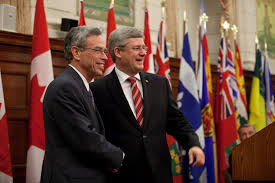 “Canada is recognized as a world leader in promoting transparency and accountability in the extractive sector both at home and around the world.

“Prime Minister Stephen Harper announced in June 2013 that a new mandatory reporting system will be established that is consistent with international standards and aligned with G8 countries.

“This will mean a level playing field for companies operating domestically and abroad, enhanced investment certainty and reinforced integrity of Canadian extractive companies. The new reporting system will also increase transparency and provide citizens in resource-rich countries around the world with the information they need to benefit from the natural resources in their own countries.

“Our government welcomes the recommendations released by the Resource Revenue Transparency Working Group. We will review the proposed framework as we continue to engage with industry, provincial and territorial governments, Aboriginal groups and civil society organizations on the development of a new mandatory reporting system.”