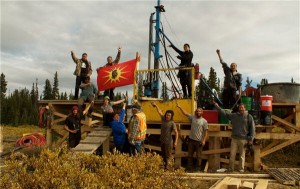 A mining company has been banned from entering Tahltan Nation communities in Northern BC without first asking for permission from leaders.

Iskut and Tahltan Bands have both passed Band Council Resolution agreements demanding that mining company Fortune Minerals does not enter their reserve lands without consent from leadership. Fortune is proposing building an open-pit coal mine on Mount Klappan, which lies in traditional Tahltan territory.

“This is a warning for Fortune Minerals,” said Tahltan Central Council President Annita McPhee. “Tahltan people have asked their leadership to oppose Fortune’s Arctos Anthracite Project coal mine proposal. Our people spent last year protecting the land while Fortune tried to drill in the area, and yet still they try to promote the Arctos Anthracite Project within our communities. That’s why these Band Council Resolutions have been passed. If they are not respected bylaws which make it illegal for Fortune to enter the reserves will be considered.”

The action came after reports of Fortune staff knocking on doors to promote the Arctos Anthracite Project. Fortune Minerals has also distributed videos suggesting that working together on the project would be a “win-win for both sides”.

The Fortune Minerals project would be located in a critically important area of Mount Klappan that requires long-term management and protection to preserve cultural and ecological values. The area, also known as the Sacred Headwaters, is a traditional hunting ground and feeds three of the region’s major salmon-bearing rivers – the Skeena, Stikine and Nass.

“Our people have been clear for years that proper management and protection of the Klappan area is needed, and that they will not support the Arctos Anthracite Project. The company’s efforts to lobby our people have only hardened their resolve and opposition,” said Chief Marie Quock of the Iskut Band. “We expect Fortune Minerals to respect this decision of Iskut Band Council and not come on our reserve lands without prior approval from Council.”

“The Tahltan Band rejects these bush-league tactics by Fortune Minerals,” said Tahltan Band chief Rick McLean. “Our message to them is blunt – get serious, recognize that this project should not go ahead in this critically important part of our territory, and get out of the Klappan.”

Annita McPhee added: “For years the Tahltan Central Council has made it clear to the province of British Columbia and companies, that it is ready to partner on sustainable development in Tahltan territory.

“We have a proven track record of collaborative success – including the Northwest Transmission Line and AltaGas projects within Tahltan territory. At the same time, we have been clear in carrying forward the message of the Tahltan people that further expansion of mining in our territory requires the protection of the Sacred Headwaters, and that if the area is not protected it could have consequences for other projects and opportunities across Tahltan territory.”