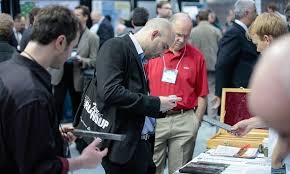 The Association for Mineral Exploration British Columbia’s annual conference, Mineral Exploration Roundup closes today. Although the cyclical nature of the commodity sector has been challenging for some junior explorers, the conference was the fourth most attended on record, attracting more than 6,700 participants from 35 countries. This is the first year that the 32nd annual conference, the third largest annual trade convention in Vancouver, has been held in the Vancouver Convention Centre East.

Roundup Organizing Committee chair Kendra Johnston says, “This year’s Mineral Exploration Roundup conference has been a great success, thanks to fabulous sponsors, exhibitors, speakers, delegates and volunteers who are optimistic about the future of exploration in 2015 and beyond.”

Highlights from Mineral Exploration Roundup 2015 include the following:

AME BC is the lead association for the mineral exploration and development industry based in British Columbia.  Established in 1912, AME BC represents, advocates, protects and promotes the interests of thousands of members who are engaged in mineral exploration and development in BC and throughout the world. AME BC encourages a safe, economically strong and environmentally responsible industry by providing clear initiatives, policies, events and tools to support its membership.