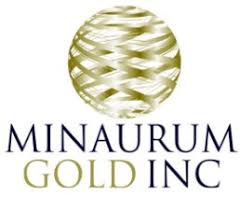 Minaurum Gold, Inc (TSX-V: MGG) is pleased to announce results from its on-going Phase II drilling program at its Alamos silver project in Sonora, Mexico. Drilling at the Alessandra vein recently discovered a blind Ag-Cu-Pb-Zn skarn that is open in all directions while ongoing drilling at Europa-Guadalupe continues to delineate a high-grade mineralized vein system which is now been extended by 40% to at least 800 meters in length. Europa-Guadalupe remains open at depth and along strike.

“Our strategy of drilling sizable step-outs continues to return excellent hit rates as we discovered both a significant new polymetallic skarn system at the Alessandra target in addition to expanding the mineralized strike of the Europa-Guadalupe vein system by 40%,” stated Darrell Rader, Minaurum President and CEO. “With both targets remaining open along strike and at depth, we look forward to updating the market as drilling continues.”

David M. Jones, Director of Minaurum Gold and skarn expert, commented, “The discovery of a blind silver-gold-copper skarn is a testament to Minaurum’s commitment to enhancing shareholder value through aggressive exploration. We made the decision to return to the Alessandra vein target based on the recognition of pathfinder elements which we deduced might lie above a mineralized body and now we have demonstrated that this concept was correct. Alessandra has the right host rocks (reactive limestones), the right intrusions (large mafic dikes) and the target is completely open with no known prior mining history.”

Characterized by strong retrograde alteration of garnet-diopside skarn, the AL21-85 intercept displays a down-dip increase in silver and gold grades and the continuation of strong copper and zinc grades. The increase in silver values, from nearly absent in surface exposures and previous drilling at Alessandra, along with strongly anomalous levels of arsenic, bismuth, and tellurium in the mineralized intercept, suggest potential for increased precious-metal mineralization at depth. The Alessandra vein zone extends for one kilometre of strike.

Hole AL21-090 was drilled from the same collar as AL21-085, but at a shallower angle in order to test the zone up dip (Figures 2 and 3). Assay results are pending for hole AL21-090 while drilling at Alessandra continues.

Drilling shows that vein mineralization continues along the vein zone and indicates that the vein is open along strike and down-dip. Hole AL19-028 targeted the vein about 220 m north of the AL21-083 intercept and roughly 150 m up-dip. The vein is open below and to the north of the -028 intersection. See Table 1 for drill highlights and Figures 4 and 5 for locations of drill intercepts.

Three more holes, AL21-086, -087, and -088 were completed in the south-central part of the Europa zone. Hole AL21-086 encountered significant mineralization in the granodiorite footwall of the andesite/granodiorite contact. AL21-088 cut a 21.85-m-wide zone of mineralization that included a 0.40-m section grading 304 g/t Ag in the immediate hanging wall of the contact. 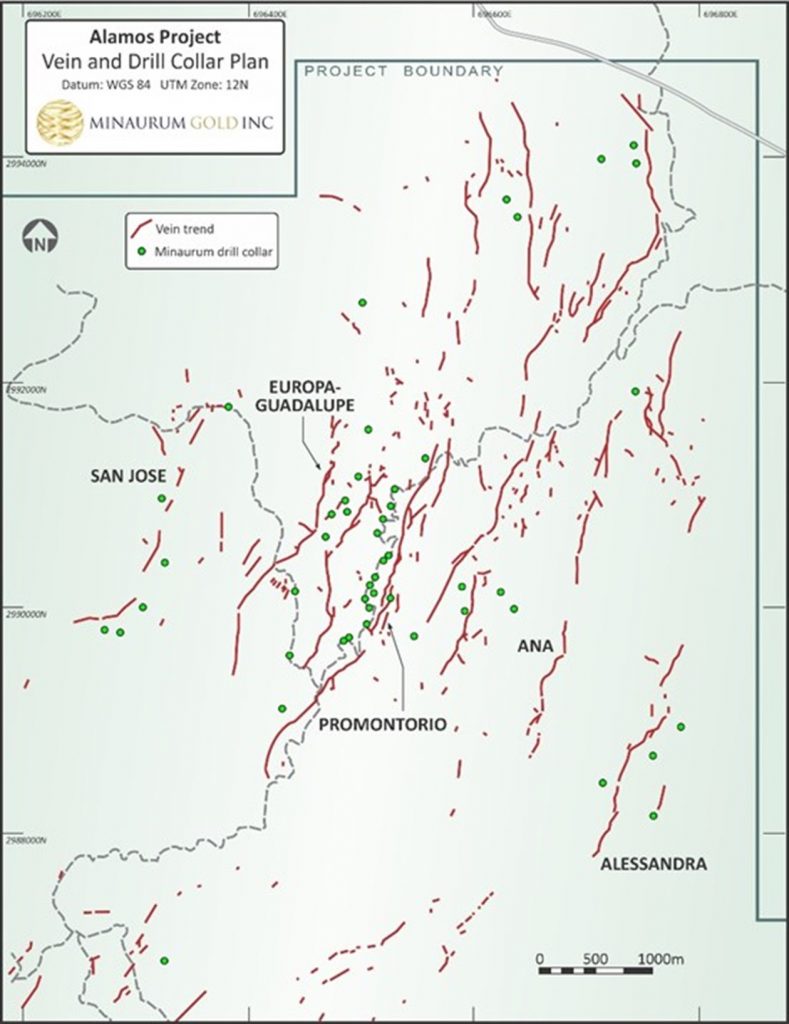 Minaurum is rehabilitating the Promontorio adit, to gain access for geological mapping and to pump water for drilling from the mine’s lower workings. The Promontorio adit is reported to be 1,200 metres long, with at least two levels below the main access adit. Geological mapping of the workings, combined with historical drill results (see News Release dated February 6, 2020) will aid in further drill targeting and development of a geological model at Promontorio.

Minaurum has drilled 7 holes at Europa-Guadalupe, 2 at Alessandra, 2 at San José, and 1 at Ana in 2021. Assays are pending for the second hole at Alessandra and the San José holes. 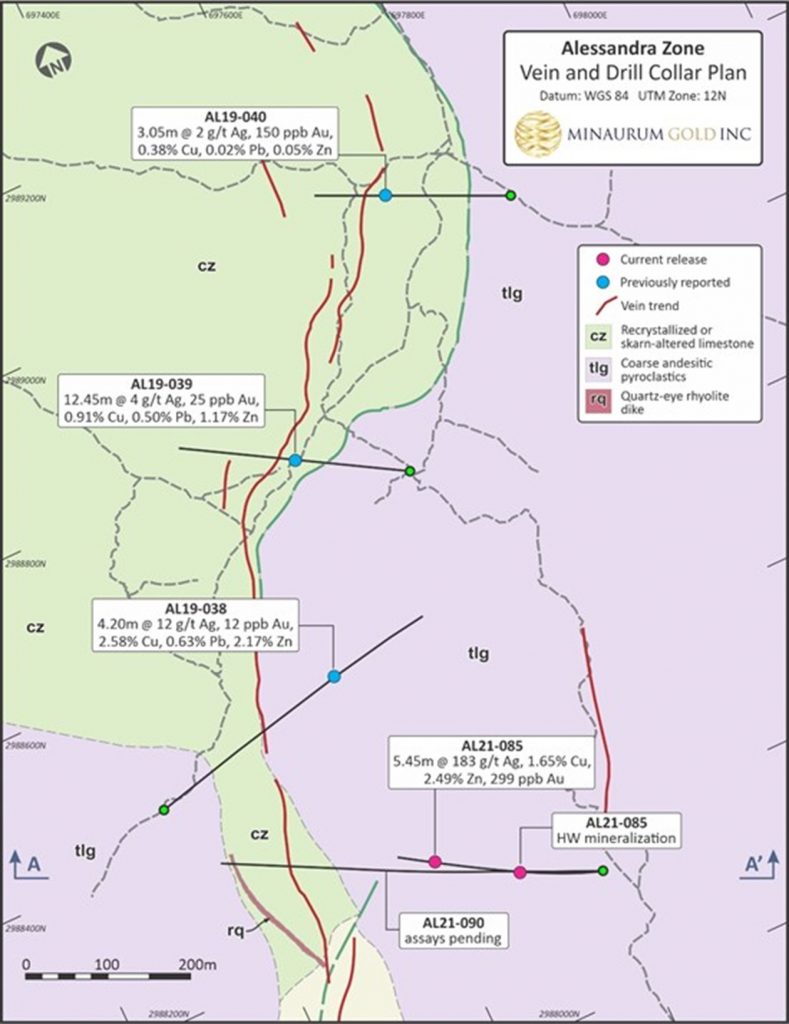 Figure 3. Longitudinal section of Alessandra zone, looking WNW. Note that zone is open to north and south, and down dip. Click on image to enlarge. 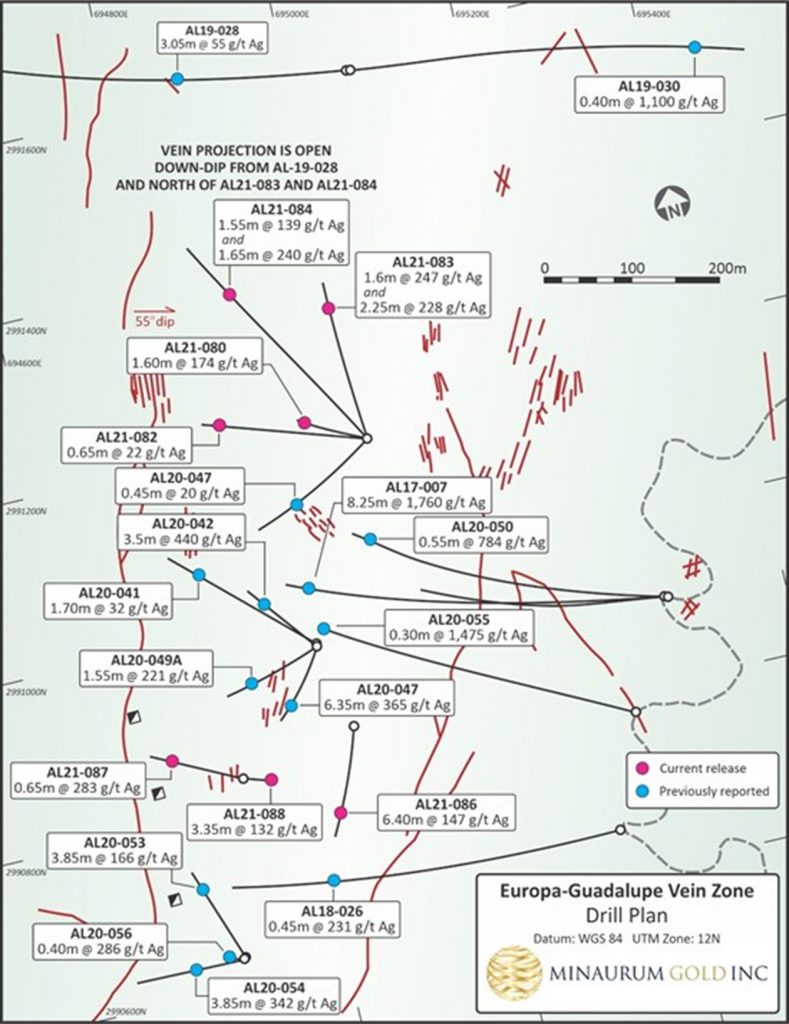 Figure 5. Longitudinal section of the Europa-Guadalupe vein zone, showing mineralized intercepts and contoured silver grade-thickness. View is to west-northwest. The vein zone dips toward the viewer at 55 degrees. Note that the vein zone projections to the north and down dip of holes AL21-083 and -084, and south of holes AL20-054 and -056 are untested. Hole AL19-028 cut the vein zone considerably higher than other intersections. Click on image to enlarge.

Minaurum Gold Inc. is a Mexico-focused explorer concentrating on the high-grade Alamos silver project in southern Sonora. With a property portfolio encompassing multiple additional district-scale projects, Minaurum is managed by one of the strongest technical and finance teams in Mexico. Minaurum’s goal is to continue its founders’ legacy of creating shareholder value by making district-scale mineral discoveries and executing accretive mining transactions.