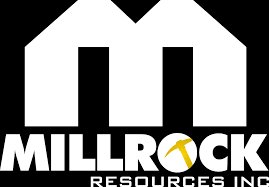 Millrock Resources Inc. (TSX-V: MRO) (OTCQX: MLRKF) is pleased to report developments concerning its exploration projects in the Golden Triangle District of British Columbia. Under the contemplated transaction, Millrock will vend its Todd Creek project to Sojourn Exploration Inc. (TSX-V: SOJ). The terms of the existing option agreements with Sojourn concerning Millrock’s Oweegee Dome and Willoughby projects would also be modified. If the transaction is completed Millrock will be a 19.9% owner of Sojourn, and a royalty holder on the properties. Additionally, under the proposal, Sojourn will issue shares to Seven Devils Exploration Ltd. for four British Columbia projects. The SDE team will take over executive and technical management of Sojourn. The intended result will be a well-financed exploration company managed by an outstanding technical team that will specialize as a British Columbia Project Generator company.

Millrock President & CEO Gregory Beischer commented: “Sojourn will have a new management team that has outstanding depth in British Columbia metallogeny. We anticipate the newly constituted company will have great success following the Project Generator business model, and make great discoveries that will in turn benefit Millrock shareholders.”

Sojourn and SDE have signed a letter of intent to enter into a definitive agreement within 60 days. The definitive agreement will be subject to approval by the board of directors of each party. Modifications to the existing Millrock – Sojourn agreements that are contemplated by the Sojourn – SDE letter of intent will require approval by Millrock’s board of directors. The agreements will also require approval of the TSX-V Exchange, and some underlying claim owners. Closing of the proposed transaction is subject to a private placement by Sojourn (the terms and pricing of which have yet to be determined), and the following changes to Millrock’s existing agreements with Sojourn as follows:

Concurrently with the closing of the proposed transaction, Sojourn’s board will be reconstituted to comprise five directors, being Dr. Tyler Ruks, Dave Broughton, Gregory Beischer, John Meekison and Don Lay. In addition, SDE has assembled an experienced, award-winning technical team with a strong background in regional tectonics and metallogeny of the northern Cordillera, and a history of success as Project Generators and mine finders.

The SDE properties give Sojourn (and therefore Millrock) exposure to three of B.C.’s most productive belts for porphyry copper-gold exploration, the Toodoggone District (Oxide Peak), the northern Quesnel Trough (Eagle), and the Late Cretaceous Bulkley intrusions of the Skeena Arch (Rip), as well as a newly discovered Miocene porphyry belt in Northern Vancouver Island (Teeta Creek). Along with the Golden Triangle projects that Millrock has contributed, Sojourn will have a strong property portfolio with which to begin its Project Generator mineral exploration business.

Seven Devils President Tyler Ruks commented: “We have been fortunate at Seven Devils to have assembled a top notch team whose track record of discovery has resulted in exceptional returns for shareholders. Our team has a long and successful history as Project Generators, having recently explored with some of the biggest and best names in mining, including Freeport McMoRan, Robert Friedland, ITOCHU and Antofagasta. Millrock is one of North America’s top Project Generators. With Sojourn, they have done an exceptional job in assembling a large and highly prospective land position in the Golden Triangle, one of North America’s premier base and precious metals districts. This, combined with Jeff and JoAnne’s unrivaled knowledge of Golden Triangle geology and exploration potential, will provide us with a unique advantage on the road to discovery. We are delighted to be joining forces with Millrock and Sojourn, and in doing so, forming the next big name in mineral exploration.”

The scientific and technical information disclosed within this document has been prepared, reviewed and approved by Gregory A. Beischer, President, CEO and a director of Millrock Resources. Mr. Beischer is a Qualified Person as defined in NI 43-101.

Millrock Resources Inc. is a premier project generator to the mining industry. Millrock identifies, packages and operates large-scale projects for joint venture, thereby exposing its shareholders to the benefits of mineral discovery without the usual financial risk taken on by most exploration companies. The company is active in Alaska, British Columbia, the southwest USA and Sonora State, Mexico. Funding for drilling at Millrock’s exploration projects is primarily provided by its joint venture partners. Business partners of Millrock have included some of the leading names in the mining industry: Centerra Gold, First Quantum, Teck, Kinross, Vale, Inmet, Altius, and Riverside. Millrock is a major shareholder of junior explorers PolarX Limited. and Sojourn Exploration Inc.