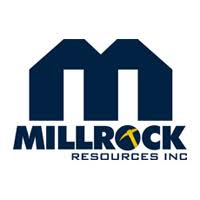 Millrock Resources Inc. (TSX-V: MRO) (OTCQX: MLRKF) is pleased to report that the second phase of core drilling on the La Navidad gold project has been completed. The program was designed to test geological targets identified through soil and rock sampling, geophysical surveys and trenching. The drill holes targeted the Crossover and Cobre prospects. The Navidad project, located in Sonora State, Mexico, 100 km north of the City of Hermosillo, targets orogenic gold deposits and is being funded under an option to joint venture agreement by Centerra Gold Inc. (“Centerra”). In total, 2,969 meters in 14 holes were drilled. Additionally, Hole NV-010 initially drilled in the first drilling campaign was deepened. The table following on the next page indicates significant and anomalous drill intersections for gold in grams per metric tonne. Highlights of the program with two different cutoff grades are shown on the table immediately below:

Millrock President & CEO Gregory Beischer commented: “Some strong results were obtained in this program from the Crossover and Cobre prospects with anomalous gold over significant core intervals. More drilling will be necessary to determine whether there is continuity between the discrete zones of mineralization intersected.”

Note: The mineralized intervals reported in the two table in this disclosure are down-hole, measured thickness. Based on initial interpretations it appears the mineralized zones intersected dip shallowly to the north at 15 degrees. However, there is not enough geologic control at this point to verify the interpretation and therefore to make an accurate estimate of true width with confidence. In particular, it is noted that hole NV-021 may have been drilled sub-parallel down the dip of several gold-mineralized structures. For the composited values reported, a 0.1 gram per tonne gold cut-off was used, and a maximum allowable internal dilution thickness of 3.0 meters was used. See note below concerning quality control – quality assurance.

Since forming an option to purchase agreement with the underlying mineral right owner of La Navidad in June 2017, and a simultaneous option to joint venture agreement with Centerra, Centerra and Millrock have collaborated to execute a comprehensive exploration program. Initial surface exploration results were reported in this press release and results of the first drilling program was reported in this press release by Millrock. Centerra is funding the exploration work to earn an interest in the project.

Millrock adheres to stringent Quality Assurance – Quality Control standards. Drill core is kept in a secure location at all times. Core samples are assayed at the Bureau Veritas laboratory in Hermosillo, Mexico. Preparation and analysis methods are described in further detail here. The sample preparation method code being utilized for the current rock sampling program was PRP70-250. Analysis methods used include FA430 (30 gr/Fire Assay/ICP) and AQ-200 (Aqua Regia – ICP/MS). For every 20 rock samples, a blank sample known to contain less than 3 parts per billion gold or a standard sample (Certified Reference Materials) of known gold concentration, or a duplicate sample was also analyzed. The Qualified Person is of the opinion that the results reported in this press release are reliable.

The scientific and technical information disclosed within this document has been prepared, reviewed and approved by Gregory A. Beischer, President, CEO and a director of Millrock Resources. Mr. Beischer is a Qualified Person as defined in NI 43-101.

Millrock Resources Inc. is a premier project generator to the mining industry. Millrock identifies, packages and operates large-scale projects for joint venture, thereby exposing its shareholders to the benefits of mineral discovery without the usual financial risk taken on by most exploration companies. The company is active in Alaska, British Columbia, the southwest USA and Sonora State, Mexico. Funding for drilling at Millrock’s exploration projects is primarily provided by its joint venture partners. Business partners of Millrock have included some of the leading names in the mining industry: Centerra Gold, First Quantum, Teck, Kinross, Vale, Inmet, Altius, and Riverside. Millrock is a major shareholder of junior explorers PolarX Limited. and Sojourn Exploration Inc.