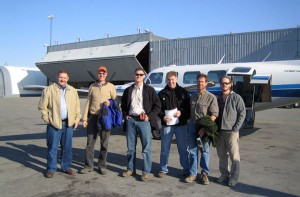 Millrock Resources Inc. (TSX VENTURE:MRO) is pleased to announce that it has made an exploration and option to lease agreement with Bristol Bay Native Corporation. The agreement covers a tract of land that covers three known porphyry copper-gold occurrences on the Alaska Peninsula. The village of Chignik is located roughly central to the land package which is more than 140 km long and 90 km wide and covers an area of approximately 650,000 ha. The known porphyry occurrences are named Kawisgag, Mallard Duck Bay and Bee Creek and these are located near deep tidewater coastlines.

Gregory Beischer, President & CEO of Millrock, stated, “This agreement gives Millrock access to a very large, highly prospective land package that has barely been explored. We are proud to engage with BBNC to responsibly explore for and develop mineral resources. We look forward to performing systematic regional-scale exploration and making great discoveries on these lands. We plan to share the risk of this exploration work by partnering with other exploration and mining companies.”

At the Kawisgag prospect, targets are immediately ready to drill. There are two main centers of mineralization and alteration which locally contain disseminated and vein chalcopyrite, molybdenite and pyrite at surface.

The Mallard Duck Bay prospect is a zone of hydrothermal alteration covering an area greater than eight square km. The zone has seen very limited exploration but mineralization appears to be associated with a diorite stock. A strong chargeability anomaly coincident with exposed mineralization in a potassic alteration zone was identified by prior workers, but never drilled.

Mineralization at the Bee Creek prospect is hosted in hornfelsed sediments intruded by a multiphase diorite intrusive rock containing mineralized veins and disseminated chalcopyrite, molybdenite and pyrite. A broad, central, potassic alteration zone bordered by a discontinuous halo of phyllic alteration is exposed at surface. The prospect was initially explored by Bear Creek Mining with five drill holes in 1976. In 2005 and 2006, Metallica Resources Inc. and Full Metal Minerals Ltd. carried out geochemical and geophysical surveys, and drilled two holes. One of the holes intersected 118 m averaging 0.31% Cu, 0.009% Mo and 0.126 ppm Au with 20 m of 0.66% Cu and 0.255 ppm Au (see Full Metal Minerals news release dated October, 23, 2006 entitled “Full Metal and Metallica Encounter Copper Mineralization at Bee Creek” under their SEDAR profile, at www.SEDAR.com). Mineralization, alteration and anomalous copper values in soils and rocks extend over a broad area at the Bee Creek prospect indicating the potential for a significant porphyry Cu-Mo-Au deposit near surface. A qualified person has verified the data disclosed in this paragraph for Millrock.

In addition to these three known prospects, the region is prospective for porphyry copper-gold-molybdenum systems and other intrusive-related deposits such as polymetallic skarn and replacement deposits, base metal veins and epithermal gold deposits. However, very little exploration has been done.

The exploration agreement gives Millrock the right to explore for minerals on the mineral estate lands and, if terms are met, lease tracts of land for mining operations. Much of the land package is split estate, with Alaska native village corporations owning the surface. Millrock has made access agreements with two of these corporations. In order to fulfill the exploration agreement terms, Millrock must incur exploration expenditures of US$5 million and pay US$725,000 prior to December 31, 2019. The initial payment is $25,000 and the first-year exploration expenditure requirement is US$200,000. Additionally, Millrock will make a BBNC Scholarship Foundation donation of US$10,000 annually. Lease tracts of up to 7,500 acres will require an annual payment of US$200,000. A sliding-scale Net Smelter Return (NSR) royalty is payable on gold (1.0% when gold is under US$1,000 (spot price per ounce), 1.5% when gold is under US$2,000 and 2.0% when gold is over US$2,000). An NSR royalty of 1.0% is payable to BBNC on all other metals produced.

Millrock Resources Inc. is a premier project generator to the mining industry. In the search for world-class metallic mineral deposits in mineral rich Alaska and southwest USA, Millrock identifies, packages and operates large-scale projects for joint venture, thereby exposing its shareholders to the benefits of mineral discovery without the usual financial risk and attendant shareholder dilution taken on by most exploration companies. Millrock currently has eleven active exploration projects, seven gold-copper properties in Alaska, and four porphyry copper prospects in Arizona. With funding primarily coming from its joint venture partners, Millrock projects that it will carry out exploration programs with a total value of more than US$5M in 2013. Business partners of Millrock include some of the leading names in the mining industry: Teck, First Quantum and Altius.