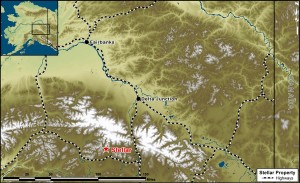 Millrock Resources Inc. (TSX VENTURE:MRO) announces that it has entered into a Letter Agreement with a major international mining company – one of the world’s leading copper producers whereby the Company will grant a right of first refusal to the Miner to enter into an Option and Joint Venture Agreement concerning the Stellar Project, Alaska. In consideration of the ROFR, the Miner will fund an initial exploration program estimated to cost US$200,000. The program will consist of regional geochemical sampling, geological mapping and prospecting, which will be carried out in August 2013 by Millrock. Subject to exercise of the ROFR by October 31, 2013, the Miner will have an option to earn up to an 80% joint venture interest in the property through a two-stage option agreement.
The Stellar project is located in central Alaska 13 km north of the Denali Highway and 68 km west of the town of Paxson. The property, which Millrock acquired by staking in 2012, covers the Zackly copper-gold skarn deposit. Surrounding lands are considered prospective for porphyry copper-gold deposits, or other types of copper deposits and intrusion-related gold deposits. Millrock owns a 100% interest in the claims subject to a royalty payable to Altius Minerals Ltd.
The technical information within this document has been reviewed and approved by Gregory A. Beischer, President & CEO of Millrock. Mr. Beischer is a Qualified Person as defined in NI 43-101.
About Millrock Resources Inc.
Millrock Resources Inc. is a premier project generator to the mining industry. In the search for world-class metallic mineral deposits in mineral-rich Alaska and southwest USA, Millrock identifies, packages and operates large-scale projects for joint venture, thereby exposing its shareholders to the benefits of mineral discovery without the usual financial risk and attendant shareholder dilution taken on by most exploration companies. Millrock currently has ten active exploration projects, seven gold-copper properties in Alaska, and three porphyry copper prospects in Arizona. Funding for Millrock’s exploration projects primarily comes from its joint venture partners. Business partners of Millrock include some of the leading names in the mining industry: Teck, First Quantum and Altius.