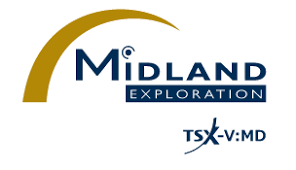 Midland Exploration Inc.  (TSX-V: MD) is pleased to announce the execution of an option agreement with Wallbridge Mining Company Limited for its Casault gold property.

The Casault property is also located approximately 40 kilometres east of the Detour Lake mine. This open pit mine held by Kirkland Lake Gold Ltd. hosts proven and probable mineral reserves totalling 12.64 million ounces of gold, consisting in 397.7 million tonnes at a grade of 0.99 g/t Au (as at December 31, 2019).

*Mineralization occurring at the Detour Lake mine and on the Fenelon project/Tabasco zone is not necessarily representative of mineralization that may be found on the Casault property.

*The true thickness of drill intercepts reported in this press release cannot be determined with the information currently available; intervals are therefore reported in core length.

Wallbridge may earn 50% interest in the Casault property over a period of four (4) years in consideration of the following:

After exercising this first option to earn a 50% interest, Wallbridge may increase its interest to 65% (the Second Option) over a period of two years in consideration of the following:

Midland is proud to join forces once again with a solid partner such as Wallbridge. Wallbridge will be project operator and will begin, shortly, a major exploration program to test quality targets in the Vortex zone, as well as other targets located elsewhere on the property near the Sunday Lake Fault. The discovery of the Vortex zone in 2017, a major gold-bearing system associated with alkaline intrusions along the Sunday Lake Fault, yielded drill results reaching 1.38 g/t Au over 26.2 metres from 155.80 to 182.00 metres, including 7.9 g/t Au over 2.2 metres from 179.80 to 182.00 metres (see press release by Midland dated January 18, 2018).

* Mines and deposits located near Midland projects in the Detour belt

Mineralization occurring at the Detour Lake mine, the Fenelon project/Tabasco Zone and the Martiniere /Bug Lake deposits is not necessarily representative of mineralization that may be found on the Casault property.

The Company is currently developing its 100%-owned Fenelon gold property, which is located along the Detour-Fenelon Gold Trend, an emerging gold belt in northwestern Quebec with an ongoing 80,000 to 100,000-metre exploration drill program in 2020 and a 33,500-tonne bulk sample and 75,000 metres of drilling completed in 2019. Wallbridge is also pursuing additional advanced-stage projects which would add to the Company’s near-term project pipeline. Wallbridge is also the operator of, and a 16.5% shareholder in, Loncan Canada Inc., a privately-held company with a large portfolio of nickel, copper, and PGM projects in Ontario’s Sudbury Basin.

This press release was prepared by Mario Masson. P.Geo., VP Exploration for Midland and Qualified Person as defined by NI 43-101, who also approved the technical content of this press release.