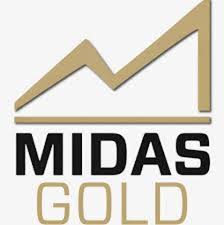 Midas Gold Corp. (TSX:MAX) (OTCQX:MDRPF) reported that it has completed its previously announced offering of Canadian dollar denominated 0.05% senior unsecured convertible notes issued by a wholly owned subsidiary of the Company, raising total gross proceeds of US$35.0 million (C$47.6 million).  The 2020 Notes are convertible into common shares of the Company at a price of C$0.4655 per share.  All of the 2020 Notes were purchased by Paulson & Co., Inc. and no 2020 Notes or Common Shares were taken up under the proposed brokered portion of the Offering.

“We are appreciative of the continued support of Paulson in completing this Offering of the 2020 Notes,” said Stephen Quin, President & CEO of Midas Gold Corp.  “Through this Offering, we are now positioned to continue to advance the world class Stibnite Gold Project with certainty of funding.”

“On behalf of Midas Gold, we thank Peter Nixon for his exemplary leadership as Chair of the Company since its foundation and will continue to work with him in his continuing role as Lead Director,” said Mr. Quin.  “Mr. Kim has been an active contributor to the Company since his appointment in 2016 and we look forward to working with him on this next important phase of the Company’s development.”

Under the Offering, Paulson, on behalf of the several investment funds and accounts managed by it, purchased 2020 Notes in the aggregate principal amount of C$47.6 million (US$35.0 million).

As Paulson already holds more than 20% of the Company’s outstanding securities on a partially diluted basis, the Offering does not materially affect control of the Company.

Midas Gold and its subsidiaries will use the proceeds from the Offering for permitting and feasibility studies for the Stibnite Gold Project and for working capital and general corporate purposes.

This news release does not constitute an offer to sell or the solicitation of an offer to buy, nor shall there be any sale of these securities, in any jurisdiction in which such offer, solicitation or sale would be unlawful prior to registration or qualification under the securities laws of such jurisdiction. The securities have not been and will not be registered under the United States Securities Act of 1933, as amended (the “U.S. Securities Act”), or any state securities laws, and may not be offered or sold within the United States unless an exemption from such registration is available.