In assessing the junior resource market, I now feel bold enough now to quote these words from a song on the best rock and roll album ever recorded:

I admit it’s getting better

Indeed, it is getting better, a little at a time.

The bear market for junior resource stocks began on Monday March 7, 2011, and has continued unabated for over three years. If you are skeptical about this statement, this chart of the Toronto Venture Exchange Index illustrates my point. The post-global economic crisis high of 2440 was occurred on March 4, 2011, the last trading day before the annual Prospectors and Developers Association Convention (PDAC): 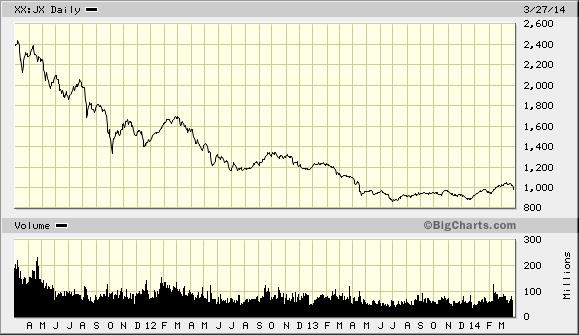 Given nine months of hindsight, it appears the bear bottom occurred at the beginning of the summer doldrums in late June and that this bottom was tested during tax-loss season in mid-December.

It is generally accepted that as goes gold, so goes the junior resource market. Let’s test that idea by charting the value of gold in US$ from the bear market beginning to now: 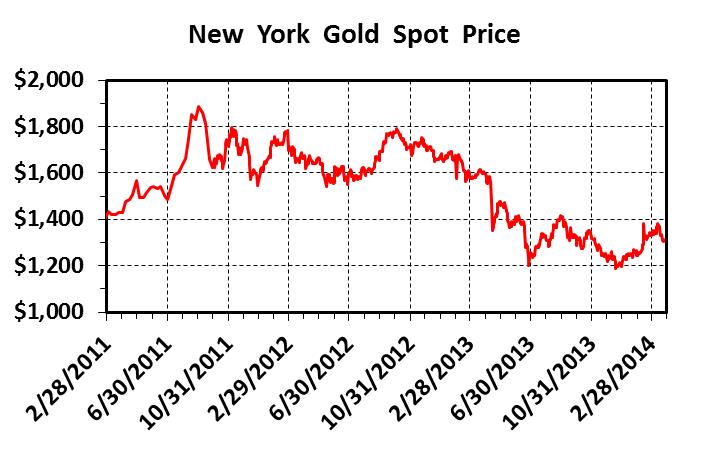 The supposed correlation of the Venture Index and gold price does not hold up over the past three years. However, with a little help from my friend, I discovered something in another chart that looks more compelling. 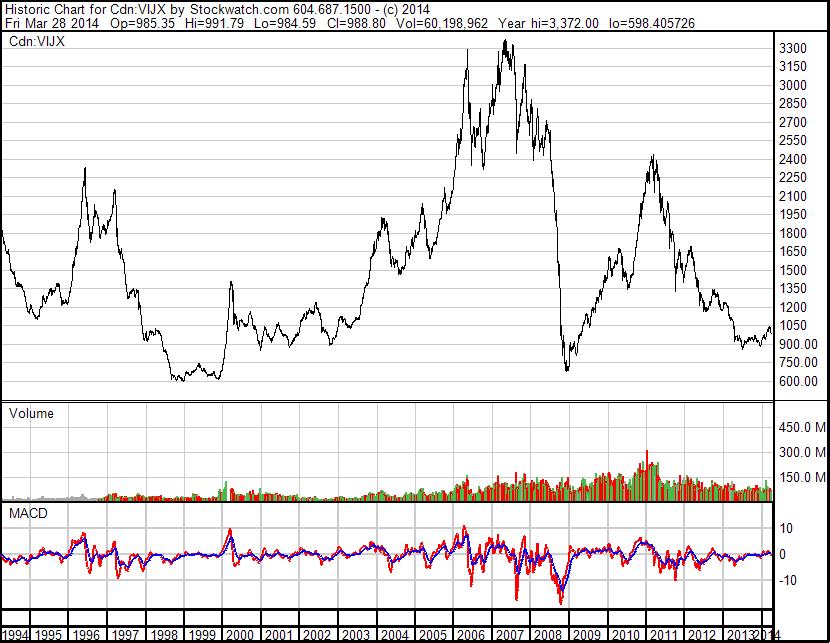 I draw your attention to a 21-month time period from early Q2 1998 to the beginning of 2000 when the Vancouver Index first took a steep nosedive over four months and then was range-bound for the next 17 months.

Now let’s compare that period with one beginning in February 2013 when the Venture Index again took a steep four month fall, and has been range-bound for the past 10 months.

Also note the lack of volatility during 1999 and also since mid-2013, with the MACD hovering around zero in both instances.

By analogy, these patterns suggest that there will be another six-seven months before we can expect this bear market to show some sustained improvement.

We will not hope for or expect an abrupt spike to the upside like occurred in early 2000. That came as the high-tech bubble migrated north from the Silicon Valley to Seattle and then on to the Vancouver junior market, bringing a horde of orphaned companies that could not be financed stateside. This spike was quickly followed by an equally impressive fall, although it did result in establishment of a much higher base for the Vancouver Index.

I’m not buying that the recent mass movement of junior “miners” into the medical marijuana venue will manufacture a mania like the dot.com buzz of year 2000.

I’m just sayin’ folks, that the current pattern looks similar to me. But please realize that I’m a fundamentals guy and I don’t know enough about technical analysis to even be considered dangerous.

Based on what I do know, here are factors I see as encouraging given recent fundamentals of the junior resource sector:

That said, we are approaching a typically unsettled season for junior equities, with these negative factors:

The three-month-long rally in the junior resource market is encouraging but, as shown by this week’s losses, tenuous at best. Only time will tell if it has staying power. According to the charts and fundamentals presented, we should have clarity on a trend in the market within six or seven months. That timeline is October to November; one to two months after investors come back to the marketplace post-Labor Day. In the meantime, I expect the market to be somewhat directionless.

The mantra at this year’s PDAC was “cautiously optimistic” that we are in for a better market going forward.

Paul the optimist said, “It’s getting better all the time” while John the pessimist replied, “It can’t get no worse.”

As an optimist, I’ll take Paul’s side. But in tribute to John, my favorite Beatle, it can’t get no worse than 2013.

Acknowledgement: I kindly thank a fellow economic geologist, who chooses to remain anonymous, for alerting me to the chart similarities discussed above.