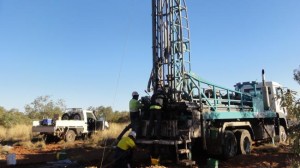 Mega Uranium Ltd. (TSX:MGA) is pleased to announce that it has entered into a binding term sheet with Toro Energy Limited (ASX:TOE) to sell its Lake Maitland Uranium Project in Western Australia to Toro for 415 million ordinary shares of Toro. Upon completion of the Transaction, Mega will own approximately 28% of the issued and outstanding shares of Toro.

Toro is an Australian uranium company listed on the Australian Stock Exchange. Toro’s flagship and wholly-owned Wiluna uranium project is located 30 km southeast of Wiluna in Central Western Australia and approximately 90 km north-west of Lake Maitland. Toro has updated prefeasibility estimates and the process engineering phase of the definitive feasibility study complete for mining of two shallow calcrete deposits, Lake Way and Centipede, for which all government environmental approvals have been received.

Stewart Taylor, Mega’s President said, “Mega is pleased to partner with Toro on the development of Wiluna. Given the proximities and similarities of the main deposits, the integration of Lake Maitland into the broader Wiluna Project is expected to unlock benefits for both Toro and Mega shareholders.”

The Transaction is conditional upon the receipt of various approvals, including the approval of Toro shareholders, Mega’s Project Partners (as defined below) consenting to and not exercising any pre-emptive rights that they may have in connection with the Transaction, and other customary closing conditions. The Transaction has the support of Toro’s major shareholder, OZ Minerals Limited, which has a 39% equity interest in Toro, and which has confirmed that, subject to the independent expert report obtained by Toro indicating that the acquisition is fair and reasonable and no superior proposal emerging, it intends to vote in favour of the Transaction. On completion of the Transaction, OZ Minerals will hold a 28.5% interest in Toro.

Mega understands that following completion of the Transaction, Toro’s focus will be to work towards implementation of the already approved Wiluna Project and to commence studies to optimise the inclusion of Lake Maitland within the overall Wiluna Project over time. This will include reviewing optimal mine planning and investigating the opportunity to expand the capacity of the Wiluna Project above Toro’s currently planned 1.3 Mtpa processing capacity.

The Transaction does not impact upon Mega’s previously announced proposed merger with Rockgate Capital Corp. which the parties continue to work toward.

The Transaction is expected to be effected by Toro’s subsidiary, Nova Energy Pty Ltd, acquiring 100% of the issued capital of Mega’s subsidiary, Redport Exploration Pty Ltd. Redport, through its 100% owned subsidiaries, will own the relevant Lake Maitland tenements and associated assets and rights and at completion will have a surplus cash balance of $1.5 million. Consideration for the Transaction is 415 million fully paid ordinary shares in Toro.

On completion of the Transaction, Mega will hold a 28% equity interest in Toro. Toro has agreed to grant Mega rights to appoint two nominees to the Toro board of directors for so long as Mega maintains at least a 22% interest in Toro. Initially, Mega’s Executive Vice President – Corporate Affairs, Richard Patricio, and Executive Vice President – Australia, Richard Homsany, will join the board of Toro as non-executive directors. Mega has also agreed to a 12-month escrow of its Toro shares, with customary market exceptions, and to a standstill which limits Mega’s capacity to acquire further Toro shares within the next 2 years.

In addition, the Project Partners hold certain pre-emptive and consent rights that may apply to the Transaction.

The conditions precedent to completion of the Transaction include, but are not limited to:

Reciprocal break fees of $1.0 million are payable in certain circumstances by each of Mega and Toro.

Dundee Capital Markets is acting as financial advisor to Mega.

Mega Uranium Ltd. is a Canadian mineral resources company listed on the TSX, with a focus on uranium properties. Mega has a global presence with projects in Australia at feasibility and pre-feasibility stages, and exploration projects in Australia, Canada and Cameroon. Currently, Mega is focused on the development of two of its Australian projects, Lake Maitland located in Western Australia and Ben Lomond located in Queensland. Mega has a farm in and joint venture with JAURD and IMEA on the Lake Maitland Project.