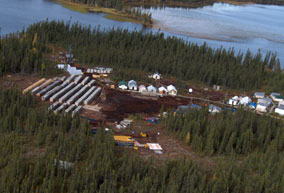 Mega Precious Metals Inc. (TSX VENTURE:MGP) and Rolling Rock Resources Corporation was granted a temporary injunction by the Court of the Queen’s Bench, Manitoba to continue exploration work at the Monument Bay Project.

Mega sought the injunction in response to a Stop Work Order and a Notice of Eviction Letter delivered to Mega on July 2, 2013 by Chief Leslie Harper of the Red Sucker Lake First Nation.

The injunction is valid until July 11, 2013 when Chief Harper, of the RSLFN will have an opportunity to be heard by the Court.

Mega Precious Metals is surprised and disheartened by the action taken by the RSLFN. The Company has been actively engaged with RSLFN since 2010 and as recently as March 26, 2013 a report signed off by Chief Leslie Harper stated that the RSLFN is content with Mega Precious Metals in community relations. The recent actions are a sudden departure from statements in this report. Additionally, Mega was surprised by allegations made in RSLFN correspondence which state the local trapper in the region Mr. Simon McDougall, supported the notice of the Red Sucker Lake First Nation to cease and desist. In subsequent correspondence with family members, they expressed support for the project and continued operations.

In addition to Mega’s engagement efforts with the RSLFN, the Company has invested almost $2.1 million in the community and Mega’s workforce comprises greater than 51% of local First Nation and Metis people. Investment in the community included over $400,000 provided to the RSLFN under a Participation Framework Agreement to fund two employment positions as Community Liaison Officers between the Monument Bay project and the community, as well as fund a Land Use Study and to encourage economic development.

The Monument Bay Project has seen exploration activities on the property since 1987 and has been fully permitted throughout the period. Mega Precious Metals has had all of the necessary permits from the Government of Manitoba to operate their camp and to conduct exploration activities on Crown land in the Monument Bay project area since December of 2010. Mega has operated in compliance with these permits and no significant issues were raised by RSLFN during recent community meetings. The permits that Mega has received from the Manitoba Government provide for continued engagement with Aboriginal communities to ensure that traditional activities and areas of cultural significance are protected and respected. Mega appreciates and fully concurs with Manitoba Government’s approach and continues to ensure that worker safety and protection of the environment will continue to come first. Mega is doing what is necessary to ensure that exploration goes on as planned in Manitoba. The Company believes that this will be a very productive summer season.

“Mega believes the Company has, and continues to, demonstrate our respect for Red Sucker Lake First Nations’ Treaty rights,” says Glen Kuntz, President and CEO. “Mega plans to continue to meet with community members and provide project updates on a regular basis in an effort to maintain our social license to operate.”

Mega Precious Metals Inc. is a well-financed Canadian-based mineral exploration company with several projects in Northwestern Ontario, Manitoba and Nunavut. The Company wishes to make a positive difference in the communities in which Mega operates. The Company is committed to operating ethically, protecting the environment, ensuring employee health and safety, and contributing to community development. Mega’s common shares trade on the TSX Venture Exchange under the symbol MGP.