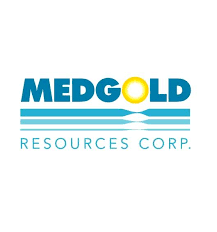 Medgold Resources Corp. (TSX-V:MED) and Fortuna Silver Mines Inc. (TSX:FVI) are pleased to announce initial results from the inaugural drill program at its flagship Tlamino Gold Project in southern Serbia. Assays have been received for the first two holes, and have returned broad intersections of near-surface gold and silver mineralization:

BAR001 is collared approximately 40 m north of the Barje outcrop (which assayed up to 84 m of 5.6 g/t Au and 105 g/t Ag in surface channel samples; see Company news release of July 18, 2017), and was designed to confirm that mineralization extends in a third dimension along a north-northeast axis from the outcrop. BAR002 is collared 290 m north-northeast of the Barje outcrop and was designed as an up-dip step-out from the outcrop and BAR001. Both drill holes successfully intersected significant near-surface mineralization; a summary of assay results is given in Table 1, and hole locations are given in Table 2. The results to date support Medgold’s interpretation of the Barje mineralization as being associated with a flat-lying regional detachment fault.

Dan James, the President of Medgold, said: “We are delighted and encouraged by the results of the first two drill holes. We have shown that the mineralization exposed at the Barje outcrop extends at least 290 m to the northeast and is only covered by a few metres of country rock. Drilling is ongoing and is fully-funded by our partner Fortuna Silver Mines.

The next several holes will continue to test the continuity of the Barje mineralized zone, as well as test the large geophysical chargeability anomaly located west of the outcrop.”

Coordinates are given in WGS84 datum and UTM zone 34 projection.

A plan map showing drill collar locations and hole traces, and cross sections are available on Medgold’s website at http://medgoldresources.com/tlamino/

To date, a total of 580 m of diamond drilling from 6 drill holes have been completed, and assays have been received for the first two holes. The objective of the drilling program is to test the continuity of mineralization away from the Barje outcrop as well as test for the presence of sulphide mineralization coincident with the geophysical chargeability anomaly.

The Tlamino Gold Project is located in Southern Serbia, close to the borders of both Bulgaria and Macedonia, approximately five hours south of the capital, Belgrade.  The Project is comprised of two exploration licences, Donje Tlamino and Surlica-Dukat, each approximately 100 km2.  All exploration work at the Project is fully-funded by Fortuna Silver Mines, which has an option to earn up to 70% of the Project by spending US $8 million on exploration over five years and completing a Preliminary Economic Assessment.

The Barje Zone is host to a large outcrop of intense brecciation and mineralization. The best results from surface channel sampling returned 84 m of 5.60 g/t Au and 105 g/t Ag (see Company press release on July 18, 2017). In 2017, an IP-Resistivity geophysical program undertaken by Medgold at the Barje Zone identified a large chargeability anomaly measuring approximately 1,000 m east-west by 400 m north-south, as well as a second-order anomaly with a NNE-axis overlying the Barje outcrop. The outcrop channel sampling and geophysical survey results were highly encouraging, and a first phase diamond drilling program was designed to test for the presence of a large shallow mineralized body associated with the Barje outcrop and chargeability anomaly.

Medgold is a Serbia-focused, TSX-V listed, project generator company targeting early-stage gold properties in the Oligo-Miocene Belt of Serbia.  Run by an experienced management team, with a successful track-record of building value in resource companies, Medgold is aiming to become a leading European gold exploration company.

Fortuna is a growth oriented, precious metal producer focused on mining opportunities in Latin America.  Its primary assets are the Caylloma silver mine in southern Peru, the San Jose silver-gold mine in Mexico and the Lindero gold Project in Argentina.  The company is selectively pursuing acquisition opportunities throughout the Americas and in select other areas.

Mr. David Clark, M.Sc., P.Geo., is a Qualified Person as defined by National Instrument 43-101 – Standards of Disclosure for Mineral Projects.  Mr. Clark prepared the technical information contained in this news release and has approved its disclosure.