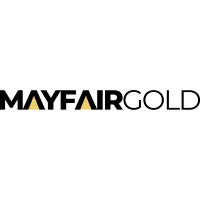 Mayfair Gold President and CEO Patrick Evans commented: “We are seeing outstanding results from the Fenn-Gib drill program. Hole FG21-155, drilled in the main Fenn-Gib zone, has returned 1.67 grams per tonne (g/t) gold (Au) over 241.1m from a downhole depth of just 11.5m. Testing of the higher-grade Footwall Zone is continuing and a fourth drill rig has started expansion drilling to the east of the Fenn-Gib deposit.”

Mr. Evans added: “Mayfair’s exploration crew has identified multiple historical surface trenches a short distance to the north of the Fenn-Gib deposit which are believed to be the surface expressions of the higher-grade Footwall Zone. Mineralization in the Footwall Zone has confirmed downhole widths of over 50m up to 500m below surface. Ongoing drilling is now testing the lateral extent of the Footwall Zone, which has the potential to host significant higher-grade gold tonnage beyond the current resource.”

Previous limited drilling by Lake Shore Gold identified gold mineralization within the footwall mafic volcanics immediately to the north of the Fenn-Gib deposit in drill holes FG11-04, 05, 07 and 08. Drilling by Mayfair has now confirmed the presence of a higher-grade Footwall Zone in hole FG21-139. The higher-grade gold mineralized intervals in the Footwall Zone include:

The Footwall Zone mineralization is not included in the current Fenn-Fib resource and is a priority target in Mayfair’s Phase 1 drill campaign. Drill holes are typically longer than 600m allowing for both the main Fenn-Gib zone and the Footwall Zones to be tested in the same holes.

Following confirmation to depth of the Footwall Zone, Mayfair’s exploration crews were deployed to determine if there are surface expressions of this mineralization. Trenches have been identified immediately to the north of the Fenn-Gib deposit, which are believed to date from before the 1970s. This trenching occurs along a northeasterly trending shear zone with disseminated sulphides, quartz veins and silica-albite-carbonate alteration. The results from the recently completed high-resolution MAG survey confirm the existence of a northeasterly trending structural zone.

Mayfair has cleared the vegetation from these trenches, which strike up to 25m in length. Photographs of the trenches can be found on Mayfair’s website at www.mayfairgold.ca.

Similar trenches have also been identified at the Horseshoe Zone, Talisman Shaft, American Eagle Shaft (all to the west of the Fenn-Gib deposit), and at the Johns Manville Zone to the northeast of Fenn-Gib. Mineralization at all these areas is very similar, consisting of bleached, buff-altered pillowed mafic volcanic ranging from 2% to over 20% fine pyrite. A total of 88 rock samples have been submitted for assaying.

Plan and section maps of the above drill holes can be found at www.mayfairgold.ca.

Mayfair Gold has commissioned two assay laboratories to improve the turnaround time for processing. Numerous assay results are pending and will be reported when received and complied.

Mayfair employs a QA/QC program consistent with NI 43-101 and industry best practices. Surface drilling was conducted by Major/Norex Drilling of Timmins, Ontario and was supervised by the Mayfair exploration team. Mayfair’s drill program includes descriptive logging and sampling of the drill core for analysis at Mayfair’s secure facility located in Matheson, Ontario. Sampled drill core intervals were sawn in half with a diamond blade saw. Half of the sampled core was left in the core box and the remaining half was bagged and sealed. Mayfair utilizes accredited laboratories, and the samples were transported by Mayfair personnel to the Actlabs laboratory in Timmins, Ontario. Gold was analyzed by 30-gram fire assay with AA-finish. Certified reference material (CRM) standards and coarse blank material are inserted every 20 samples. Drill intercepts cited do not necessarily represent true widths, unless otherwise noted.