Maritime Enters into Purchase Agreement with Inomin Mines to Acquire over 3,225 Hectares of Minerals Claim that extends our Hammerdown, Green Bay Property

Maritime Enters into Purchase Agreement with Inomin Mines to Acquire over 3,225 Hectares of Minerals Claim that extends our Hammerdown, Green Bay Property

Maritime Resources Corp. (TSX-V: MAE) is pleased to announce that it has concluded an Option to Purchase Agreement with Inomin Mines Inc. to earn a 100% interest in the King’s Point property. The claims cover geological extensions to the Company’s Hammerdown Gold deposit that host a number of high grade gold veins and base metal occurrences.

The King’s Point property is made up of two separate claim blocks consisting of a total of 129 claim units covering over 3,225 hectares. (see map below)

The northern claim block is located within only 2 km of the Hammerdown Gold Deposit. This property covers known extensions of the gold bearing deformation zone that host the Hammerdown and Orion deposits including several narrow gold vein intercepts within the Golden Anchor prospect. These veins are similar to the Hammerdown veins with historic samples assaying up to 3 gm/t gold and have never been followed up.

Additionally, the zinc-silver rich VMS horizon hosting Maritimes Lochinvar base-precious metal deposit that continues to the northeast over the property boundary onto our new King’s Point Property. Assay values in some historic drilling have intersected up to 1 metre widths with grades over 10oz/T silver with 2-3% zinc. Further to the northeast, the King’s Point property covers the old Rendell Jackman mine which was mined 1906-1909 and has excellent potential for further copper-gold mineralization.

The southern claim block is also underlain by the Catchers Pond Group which is host to several Lochinvar style zinc and copper rich (+/-Ag and Au) prospects. Previous limited drilling had encountered numerous intersections of narrow massive sulphides and broad base metal rich, stringer style mineralization in large hydrothermal alteration haloes. These have not been tested in detail.

“We are extremely pleased to have acquired this package of claims through our agreement with Inomin Mines Inc. With the known historical mineral occurrences on the King’s Point ground it adds to the overall potential of expanding our Hammerdown gold asset beyond the 4000 metre deformation zone that extends to the east onto the Golden Anchor prospect. It will be our intention to continue exploration at the King’s Point Property while the development of Hammerdown is underway.

Under the terms of the agreement Maritime will earn 100% interest in the Inomin property over a 3-year period by spending $600,000 in exploration ($75,000 in year one), make cash payments totaling $300,000 and issue 2.0 million shares of Maritime in accordance with the following schedule: 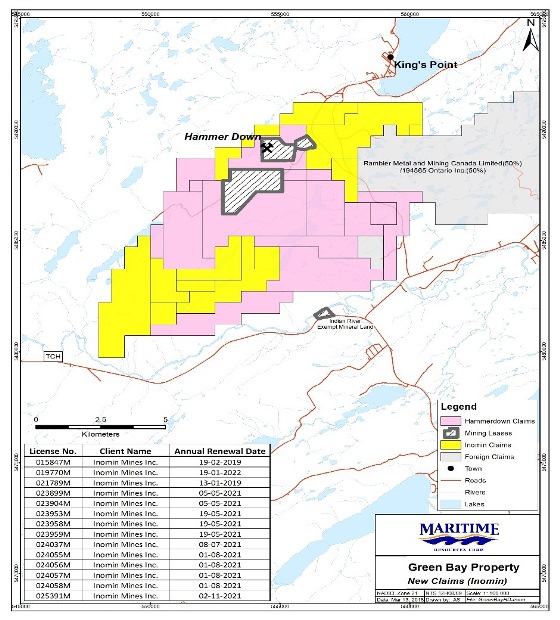 Maritime Resources holds 100% of the Green Bay Property, located near Springdale, Newfoundland and Labrador. The property hosts the past producing Hammerdown gold mine and the Orion gold deposit separated by a 1.5 km distance, as well as the Lochinvar base metals/precious metals deposit. Maritime announced a Prefeasibility Study (March 2nd, 2017) that evaluated the Measured & Indicated NI43-101 mineral resource estimate for the past producing Hammerdown gold deposit. The study was completed by WSP Canada Inc. an independent third-party engineering firm, with the mandate to evaluate the potential of bringing the past producing gold mine back into commercial production.

(All currency is expressed in Canadian dollars ($CA) unless otherwise noted.)

The Hammerdown gold deposit was successfully mined by Richmont Mines between 2000 and 2004 while gold prices averaged $325/oz. During its operation, a total of 291,400 tonnes of ore were mined and milled, at an average grade of 15.83 g/t Au, recovering a total of 143,000 ounces of gold at an 8 g/t cut-off.  All of the ore was processed at the Nugget Pond mill, now owned and operated by Rambler Metals and Mining Canada Limited, with an average gold recovery of 97.1%. Mining terminated in 2004 due to low gold prices with extensive gold mineralization remaining, although uneconomic at that time.

The Orion gold deposit consists of two main vein systems, both of which are open along strike, and down plunge to the northeast.

Bernard H. Kahlert, P.Eng. is the Qualified Person as defined by National Instrument 43-101 and has reviewed and approved the technical disclosure contained in this release.