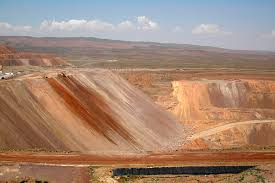 Silver Standard Resources Inc. (NASDAQ:SSRI) (TSX:SSO)  is pleased to announce the Mineral Resources estimate, Mineral Reserves estimate and life of mine plan for its 100% owned Marigold mine  located in Nevada, U.S. All figures in U.S. dollars except where noted.

Life of Mine Plan Highlights

“Following successful integration, the life of mine plan demonstrates how Marigold is an important step in transforming Silver Standard into a premier mining company,” said John Smith, President and CEO. “The cost structure and reserve life highlights the strategic value Marigold brings to us now and through the resource cycle. The life of mine plan and team provide a strong platform to drive margins and growth opportunities at the mine and in the region. Next, the team will focus on converting resources to reserves and achieving operating efficiencies, both of which are within our demonstrated expertise.”

Marigold is an open-pit gold mine located in Humboldt County, Nevada, U.S. and is situated at the northern end of the Battle Mountain–Eureka trend. Marigold is a distal-type, structurally-controlled, sediment-hosted gold-silver deposit related to Eocene magmatism. The mineralization has a strike length in excess of eight kilometers and widths up to one kilometer, making it one of the largest mineral systems in the region. The surface zone of oxide ore extends down to approximately 200 meters.

Marigold has been in continuous production since 1988, producing in excess of 2.7 million ounces of gold prior to our ownership on April 1, 2014. Ore is mined by conventional truck and shovel equipment at an average annual rate of 15.1 million tonnes at steady state production. Ore is processed via a large run-of-mine heap leach operation with an average daily stacking rate of 42,000 tonnes. Marigold produces gold doré bars which are refined into London Bullion Market Association quality bullion and the gold sold on the spot market through bullion banks. Production at Marigold is subject to various net smelter return royalties.

The mine is connected to Interstate 80 by a six kilometer unpaved road providing excellent access. Marigold has a skilled operating team and employs approximately 360 people, who manage and maintain the mine and processing facilities to world-class safety and environmental standards. Marigold power supply is provided by NV Energy through a 120 kilovolt transmission line to site. Power draw is five megawatts and is distributed through a 25 kilovolt distribution grid. Marigold water requirements are supplied from three wells located near the mine access road. There is potential for additional water for processing and site usage from a new well to be commissioned in early 2015.  The mine is located on approximately 7,900 hectares of land controlled by Silver Standard.

The Mineral Resources estimate herein is based on all available data for Marigold.

The Mineral Reserves estimate herein is based on all available data for Marigold.

Marigold uses conventional drill/blast and truck/shovel open pit mining methods. Waste and some ore is mined on 15 meter benches by a 55-cubic meter electric rope shovel. The majority of the ore is extracted on 7.5 meter benches using two 520 tonne hydraulic excavators. Wall angles vary from 47 to 51 degrees, with pre-split for final walls. Over the mine life, a fleet of eighteen 290 tonne haul trucks and three loading units are expected to move approximately 614.8 million tonnes of material including 129.7 million tonnes of ore for a strip ratio of 3.7:1.

Mine material movement averages 71.8 million tonnes per year for the nine year period of mine operations. Ore tonnage averages 15.1 million tonnes per year.  The majority of the mining is from the Mackay area. The remaining ore is mined from two satellite deposits: the Hercules pit which is north of the Mackay pit; and the 5 North pit, which is one mile north of the Mackay pit. Both the Hercules and 5 North pits contain higher grade ore; however, due to haul distances and relatively smaller ore tonnages, these pits are scheduled to be mined later in the mine life.

Ore is hauled to the leach pads and truck dumped in 6- to 9-meter lifts. The pads are permitted to a maximum height of 120 meters. Pad expansion occurs periodically through the mine life as required. The ore is treated with cyanide solution which passes through a conventional ADR (adsorption-desorption-recovery) circuit. Solution management is a critical part of the process with ore being leached over a 120-day cycle for a total recovery averaging approximately 74%. All gold treatment occurs on site, producing gold doré bars.

Operating costs per tonne of ore processed averages $9.16 over the life of mine to 2027. Optimization efforts continue at Marigold in order to reduce the operating costs going forward. These initiatives are discussed in more detail in the Opportunities section of this news release.

The Marigold mine is subject to Nevada State Net Proceeds tax at a rate of 5% and U.S. Federal income tax at a statutory rate of 35% with an Alternative Minimum income tax rate of 20%.

Marigold provides significant leverage to the price of gold. NPV sensitivities for key operational and economic metrics are presented in Table 11.

Marigold holds active, valid permits for all current facets of the mining operation as required by county, state, and federal regulations. The authorized Plan of Operations area currently encompasses 7,916 hectares, with 2,027 hectares within that area permitted for mining-related disturbance. The mine engages in concurrent reclamation practices and is bonded for all permitted features, as part of the Nevada permitting process.

Marigold will prepare a further Environmental Impact Statement (“EIS”) to permit the future mining of all pits to their planned maximum depths. In the normal course of operations planning, environmental baseline studies were initiated in 2013 to support the EIS, which is anticipated to begin in early 2015. Silver Standard has a reasonable expectation that all necessary operating permits will be granted within required timeframes to complete this life of mine plan.

Community support and engagement is well-established at Marigold and will continue, with regular updates provided by mine management to local stakeholders and regulators. In 2013, nearly $300,000 in donations, scholarships, and in-kind support was provided to local communities and charities.

Silver Standard has initiated exploration and resource/reserve development activities to enhance Marigold’s margins and extend the mine life. Drilling was initiated in June 2014 targeting the discovery of additional near-surface gold mineralization proximal to the current final pit and upgrading Inferred Mineral Resources to Indicated Mineral Resources. Further studies will examine the sulphide-hosted gold mineralization, which occurs directly below the leachable (oxide) ore, and may include further drill evaluation and metallurgical test work.

The Mineral Resources and Mineral Reserves estimates were prepared by Silver Standard.

AMEC Americas Limited (“AMEC”), Canada, provided technical input into the Marigold Mineral Resources model update upon which the current life of mine plan is based. This service was provided between April and August 2014.

Strategic life of mine options analyses and detailed life of mine planning was completed by Independent Mining Consultants Inc. (“IMC”) of Tucson, Arizona. IMC completed this work between June and September 2014.

Independent peer review of the Marigold strategic optimization work and LOM planning and scheduling process was conducted by David Tutton C. Eng., consultant mining engineer. Mr. Tutton provided feedback throughout the process and his comments were incorporated in the evolving work.