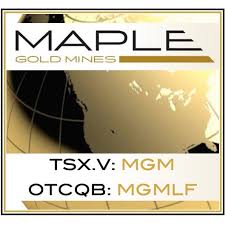 Maple Gold Mines Ltd. (TSX-V: MGM) (OTCQB: MGMLF) (FSE: M3G) is pleased to report assay results from the four drill-holes completed at the Nika Zone during this winter’s campaign. These drill-holes build upon last year’s 50m @ 1.77 g/t Au intercept in DO-18-218 (see press release of May 14, 2018) that helped establish a new zone of mineralisation not included in past resource estimates. This year’s drilling included two aggressive (200 metre) step-out holes to test for further mineralisation up-dip and down-dip from last year’s new discovery, a third hole to test the western continuity of the same discovery, and finally the deepening of a 2012 drill-hole (DO-12-105) approximately 250m to the west, which had ended in mineralisation with 21.1 g/t Au over the final 1.5 metres.

Maple Gold successfully deepened DO-12-105 (as DO-19-105X) by 114m, with the combined 2012 and 2019 intercept returning 42.5m averaging 1.75 g/t Au (uncapped) from approximately 320m vertical depth (465m downhole), including 8m averaging 2.86 g/t Au. Results from this hole should contribute additional ounces for the Nika Zone, as there is currently no conceptual pit in this area. This intercept, with its mixed style of mineralisation (syenite-basalt-alkaline gabbro-carbonatite), is interpreted to represent the western edge of the Nika Zone (see Figure 1), centered on DO-18-218, where mineralisation is largely syenite-hosted and geologically most similar to the Porphyry Zone.

Maple Gold’s VP, Exploration, Fred Speidel, commented: “We are excited by these new results, in particular by those obtained with the lengthening of hole DO-19-105X, which serve to provide support for the western continuation of the Nika Zone to at least 250m west of the original 2018 intercept, and also provides further support for the Nika Zone being open to depth. This is the second straight drill campaign in which we have intersected very significant gold mineralisation in the Nika Zone, an area not included in past resource estimates or within existing conceptual pits. We expect further drilling to ultimately result in the connection of the Nika and Porphyry Zones.”

The DO-19-105X intercept is found at the western edge of the Nika Zone, about 250m west of DO-18-218, in mixed basalt and syenite (Fig. 2), but also includes carbonatite and the related alteration halo, as well as some highly unusual, carbonatite-related garnet-pyroxene porphyritic gabbros that have been noted and described previously in the Porphyry Zone.

Holes DO-19-255 and 257, drilled up-dip and down-dip of DO-18-218 respectively, indicate that similar mineralisation is present, particularly in DO-19-257 where a broad (>100m) mineralisation halo with variable grades, potentially open to depth, was intersected. Future follow up of the DO-18-218 intercept will focus on plunge continuity, i.e. at an angle to existing drilling, as the company believes this approach will better define the volume potential of the known higher grade shoots in the Nika Zone. 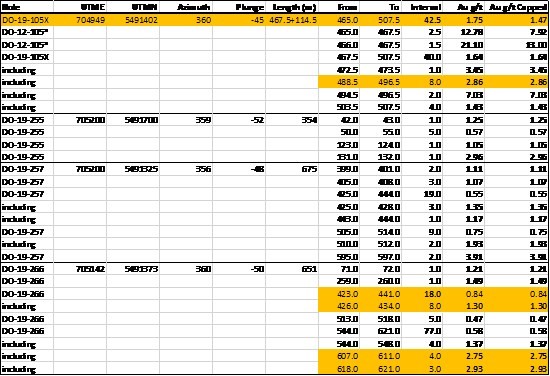 Notes: Intervals given as downhole lengths, with true estimated thicknesses varying from approximately 70-90% of downhole lengths. Porphyry Zone cappings levels (13 g/t Au) were used. All intervals use a 0.25 g/t Au cut-off, except for the broader (77m) interval in DO-19-266, which uses 0.1 g/t Au.

Maple Gold implements strict Quality Assurance and Quality Control protocols at Douay covering the planning and placing of drill holes in the field; drilling and retrieving the NQ-sized drill core; drill-hole surveying; core transport to the Douay Camp; core logging by qualified personnel; sampling and bagging of core for analysis; transport of core from site to ALS laboratory; sample preparation for assaying; and analysis, recording and final statistical vetting of results. For a complete description of protocols, please visit the Company’s QA/QC page on the website at:
http://maplegoldmines.com/index.php/en/projects/qa-qc-qp-statement

Maple Gold is an advanced gold exploration and development company focused on defining a district-scale gold project in one of the world’s premier mining jurisdictions. The Company’s ~355 km² Douay Gold Project is located along the Casa Berardi Deformation Zone (55 km of strike) within the prolific Abitibi Greenstone Belt in northern Quebec, Canada. The Project benefits from excellent infrastructure and has an established gold resource3 that remains open in multiple directions.