In the Nika Zone area, hole DO-18-227 cut 5m of 2.32 g/t Au from 101m downhole (estimated vertical depth of 90m, estimated true width of about 4.5m), on the SE edge of an existing Micon (2018) resource area. This is a new syenite-hosted zone located about 130m south of, and parallel to, the main mineralized zone in the satellite conceptual pit (Micon 2018) located just to the west of the new Nika Zones (Fig. 1). This therefore represents additional mineralization that could contribute a modest increase to the existing resource base.

In the NW Zone area, DO-18-223, a step-out hole collared about 270m to the west of the NW Zone conceptual pit, returned 3.0m of 1.58 g/t Au from 99m downhole (estimated 78m vertical depth, estimated true width of about 2.7m). This is a new volcanic-hosted zone located about 150m north of, and parallel to, the northernmost existing mineralized zone and corresponding wireframe, which could also contribute a modest increase to the existing resource base. This intercept is located approximately 270m west of historical hole 4140-94-05, that cut 1.32 g/t Au over 5.6m from the same depth. Given spacing of about 300m between existing drill-holes east of DO-18-223, additional drilling will be required, not only to test for continuity of mineralization, but also to test for possible structural intersections that may result in broadening of mineralized zones as noted in the recently discovered Nika Zones some 800m to the SE (see Fig. 1).

Within the general Nika and NW Zones area, assays are only pending for drill-hole DO-18-245 (NW Zone step-out) and hole DO-18-241 (Nika Zone); the latter could confirm the SE continuity of the significant mineralization (50m of 1.77 g/t Au, uncut), as outlined in DO-18-218 (see press release dated May 14, 2018). See all highlighted drill results to-date from the Nika and NW Zones in the summary table appended to this press release.

Maple Gold’s President and CEO, Matthew Hornor, stated: “We have now intersected multiple new mineralized zones between existing resource areas, as well as beyond them in the northwestern portion of the general Resource Area. These new mineralized zones at Nika and the NW Zone project up-dip to surface and also remain open along strike.” 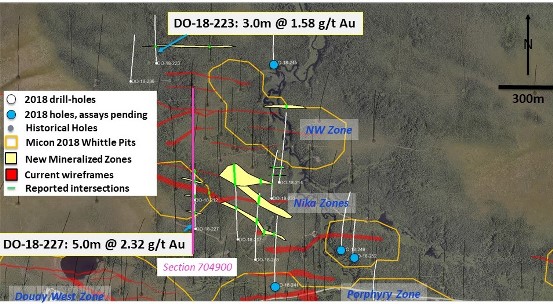 The spatial distribution of new mineralized zones, shown in pale yellow in Fig. 1 above, indicates that not only are gaps starting to be filled in between existing resource areas, but additional zones are being defined within and beyond them. Additional step-out drilling will be warranted off the northern edge of the NW Zone as there is very little drilling in that area.

The westernmost mineralized zones in Fig. 2 below, as shown in plan view in Fig. 1, represent completely new zones. All others on the cross-section, defined in historical drilling, have corresponding wireframes.

Note presence of mineralized zones within the main syenite body, as well as associated with lithological contacts, a common theme at Douay. 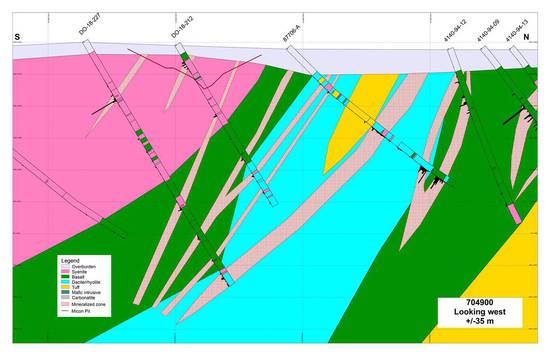 Gold mineralization in the Nika Zones is associated with larger syenitic bodies, whereas in the NW Zone to the north, mineralization tends to be hosted in a mixed volcanics and tuffs, and in particular near lithological contacts. This contrast is also shown in Fig 3 below.

Intervals given are all down-the hole lengths, which are estimated to be approximately 90% of true width. Coordinates are NAD83 Zone 17N. All assays were performed by ALS Laboratories by AU-ICP21, i.e. 30 g fire assay with ICP finish with any over limits (>10 g/t Au) redone by AU-GRA21, i.e. gravimetric analysis of 30g sample weight. Nominal cut-off to obtain intercepts is 0.25 g/t Au, but depending on grade distribution effective cut-offs can be somewhat higher or lower.

Maple Gold implements strict Quality Assurance and Quality Control protocols at Douay covering the planning and placing of drill holes in the field; drilling and retrieving the NQ-sized drill core; drill-hole surveying; core transport to the Douay Camp; core logging by qualified personnel; sampling and bagging of core for analysis; transport of core from site to the analytical laboratory; sample preparation for assaying; and analysis, recording and final statistical vetting of results. For a complete description of protocols, please visit the Company’s QA/QC page on the website at: http://maplegoldmines.com/index.php/en/projects/qa-qc-qp-statement

Maple Gold is an advanced gold exploration company focused on defining a district-scale gold project in one of the world’s premier mining jurisdictions. The Company’s 370 km² Douay Gold Project is located along the Casa Berardi Deformation Zone within the prolific Abitibi Greenstone Belt in northern Quebec, Canada. The Project has an established gold resource that remains open in multiple directions, with excellent infrastructure and several large scale operating mines within this prolific mining district. Maple Gold has now completed a significant winter drill campaign to expand on the known Resource Areas and test new discovery targets within the Company’s 55 km of strike along the Casa Berardi Deformation Zone.