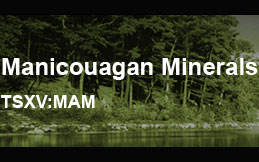 Manicouagan Minerals Inc. (TSXV — MAM) report the results of the initial orientation drilling program on its Cloridorme property located in the Gaspé Peninsula of Quebec.

The objective of the drilling program was to determine the grade, thickness and potential strike length of the aluminous red argillite (mudstone) formation located by surface mapping and sampling in different sectors of the property (see MAM Press Release dated August 2, 2012). A total of 533 metres, in six (6) holes, of core drilling was completed in three sectors of the property (A, B and C). The red and green aluminous mudstones were confirmed in each sector. A surface plan map with drill-hole locations along with cross sections is available on the Company’s website.

In Sector B, approximately 6.6 kilometres east of Sector A, a band of red mudstone with a minimum estimated thickness of 77 metres was intersected with boreholes Cl-12-05 and 06 returning 18 metres at 19.46% Al2O3 and 76.10 metres at 23.28% Al2O3 respectively. Both holes started in mineralization and only the northern, the footwall, red mudstone/host rock contact was intersected. The red mudstone unit remains open across the thickness.

All red mudstone units intersected in the drilling are open at depth and along strike and thickness for Sector B. Collectively, the above assays represent a weighted average grade of 21.6% Al2O3 over the intercepts of the six drill holes.

All assaying was carried out by ALS Minerals of Vancouver BC. A quality assurance/quality control (QA/QC) program was followed, with the insertion of standard, blank and duplicate samples into the sample stream.

The Company’s CEO, Brian Carter, commented, “The assay results of the drilling program are in line with the grades we expected for the red mudstones and are very similar to the grades encountered by Orbite Aluminae. While we only assayed for REE in one hole it again met our expectations. These results add further confirmation of the potential of the Cloridorme property in terms of size and grade.”

“I would also like to inform our shareholders that we continue to make progress through the regulatory process for approval of our proposed amalgamation with Flemish Gold Corp.”