Mako Mining Corp. (TSX-V: MKO) (OTCQX: MAKOF) is pleased to provide third quarter 2022 production results from its San Albino gold mine in northern Nicaragua, which is the fifth full quarter of production results since declaring commercial production on July 1, 2021. Financial results for Q3 2022, including detailed reporting of our operating costs, are expected to be released in November.

Akiba Leisman, Chief Executive Officer of Mako states that, “Q3 2022 was a tale of two halves. Beginning in March 2022, the Company experienced metallurgical challenges with the transition from oxide to fresh material causing a diminution of recoveries in Q2(74.5%) and the first six weeks of Q3. Optimization of the plant along with new highly detailed grade and lithological controls in our mining procedures led us to correct these issues midway through the quarter, such that recoveries are now at or above the 86% recoveries announced in connection with our metallurgical testing from 2019 (see press release dated December 13, 2019). The mine is performing well, where the diluted vein material continues to positively reconcile to the resource model, and mill throughput was running just under nameplate capacity of 500 tonnes per day, including all availability factors. The mill averaged 512 tonnes per day for the quarter at 94% availability, 4% below nameplate capacity, as the Company observed that increases in tank residence time had a beneficial effect on recoveries. Post quarter end, with further optimizations, the plant is now running above nameplate capacity, including all availability factors. With all of these changes, the Company expects that the plant will recover substantially more gold in Q4 than the 8,598 ounces recovered in Q3. Operating cash flow from the mine remains robust, with exploration expenditures increasing to US$1.3 million per month, an aggregate of US$13.2 million of principal being repaid under the Company’s loan facilities with Wexford and Sailfish Royalty Corp. since the beginning of Q3 2021, and over 2 million common shares repurchased through our normal course issuer bid.” 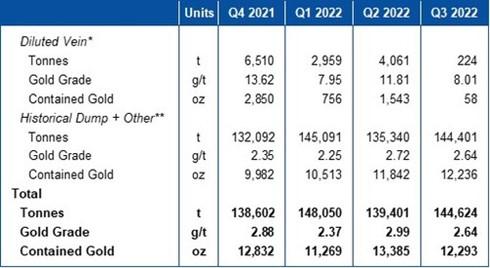 All components of the 500 tpd gravity and carbon-in-leach processing plant have been fully operational since the beginning of May 2021. During Q3, 2022, the plant has been averaging 512 tpd at 94% availability (see Table 1). In Q3 2022 the plant processed 56% diluted vein material and 44% historical dump + other material to achieve an average blended grade of 7.82 g/t Au and recovering an average of 77.0% (see Table 1).

The improvements are listed below:

In addition, a second carbon stripping vessel is currently operating in the processing plant, which is expected to further debottleneck the carbon stripping circuit. The worn-out carbon retention screens are expected to be replaced over the course of the next two weeks. The pre-leach thickener is scheduled to return to service during the fourth quarter which will increase the leach retention time due to the higher leach percentage solids produced by the thickener. These additional optimizations may improve recoveries further.

John Rust, a metallurgical engineer and qualified person (as defined under NI 43-101) has read and approved the technical information contained in this press release. Mr. Rust is a senior metallurgist and a consultant to the Company.

Mako Mining Corp. is a publicly listed gold mining, development and exploration company. The Company operates the high-grade San Albino gold mine in Nueva Segovia, Nicaragua, which ranks as one of the highest-grade open pit gold mines globally. Mako’s primary objective is to operate San Albino profitably and fund exploration of prospective targets on its district-scale land package.