Mako Mining Corp. (TSX-V: MKO) (OTCQX: MAKOF) is pleased to provide financial results for the three months ended March 31, 2022, which is the third full quarter of financial results since declaring commercial production on July 1, 2021 at its San Albino gold mine in northern Nicaragua. For detailed Q1 2022 operating results, please see the press release dated April 27, 2022. All dollar amounts referred to herein are expressed in United States dollars unless otherwise stated.

Akiba Leisman, Chief Executive Officer, states that, “Q1 2022 was the third full quarter of financial results since declaring commercial production at San Albino at our initial 500 tonnes per day mine and processing plant, where 9,580 ounces were sold at $797/oz Cash Costs and $1,104/oz AISC. Costs are higher than Q4 due to an increase in diesel and other key reagents as well as an increase in waste development tonnage. The processing plant was operating at 596 tonnes per day at 87% availability (104% of nameplate capacity), as the plant has now been fully debottlenecked. The Company generated $8.3 million in Adjusted EBITDA, which excludes $1.9 million in exploration expenditures incurred in the quarter. As a result, approximately $9 million of principal has been repaid since the beginning of Q4 2021, including $4.6 million repaid in Q1 2022, and $1.3 million repaid on outstanding loans subsequent to quarter end. In addition, the $17.2 million exploration program announced in March 2022 is being funded out of cash flow, with the focus on discovering new veins and mineralization elsewhere on our property. The first results from this program are expected to be announced later this week. These extraordinary cash flows from our relatively small scale mine are expected to allow us to fund our growth with the ultimate objective of doubling capacity to 1,000 tonnes per day by next year.” 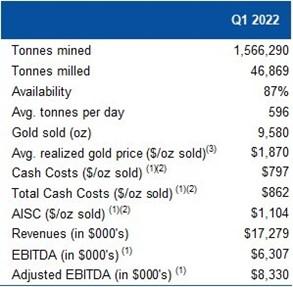 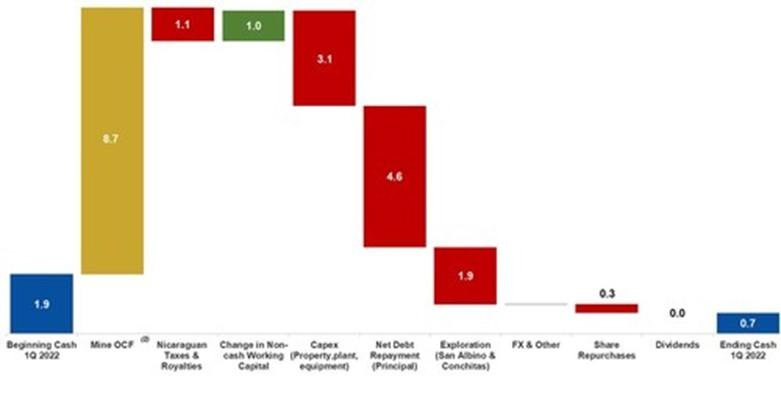 Q1 2022 – Mine OCF Calculation and Cash Reconciliation (in $ millions)

For complete details, please refer to the Consolidated Financial Statements and the associated Management Discussion and Analysis for the three months ended March 31, 2022, available on SEDAR (www.sedar.com) or on the Company’s website (www.makominingcorp.com).

The Company has included certain non-GAAP financial measures and non-GAAP ratios in this press release such as EBITDA, Adjusted EBITDA, Mine Operating Cash Flow cash cost per ounce sold, total cash cost per ounce sold, AISC per ounce sold. These non-GAAP measures are intended to provide additional information and should not be considered in isolation or as a substitute for measures of performance prepared in accordance with IFRS. In the gold mining industry, these are commonly used performance measures and ratios, but do not have any standardized meaning prescribed under IFRS and therefore may not be comparable to other issuers. The Company believes that, in addition to conventional measures prepared in accordance with IFRS, certain investors use this information to evaluate the Company’s underlying performance of its core operations and its ability to generate cash flow.

“Cash costs per ounce sold” is calculated by deducting revenues from silver sales and dividing the sum of mining, milling and mine site administration cost.

“AISC per ounce sold” includes total cash costs (as defined above) and adds the sum of G&A, sustaining capital and certain exploration and evaluation costs, sustaining lease payments, provision for environmental fees, if applicable, and rehabilitation costs paid, all divided by the number of ounces sold.  As this measure seeks to reflect the full cost of gold production from current operations, capital and E&E costs related to expansion or growth projects are not included in the calculation of AISC per ounce.  Additionally, certain other cash expenditures, including income and other tax payments, financing costs and debt repayments, are not included in AISC per ounce.

Mako Mining Corp. is a publicly listed gold mining, development and exploration company.  The Company operates the high-grade San Albino gold mine in Nueva Segovia, Nicaragua, which ranks as one of the highest-grade open pit gold mines globally.  Mako’s primary objective is to operate San Albino profitably and fund exploration of prospective targets on its district-scale land package.