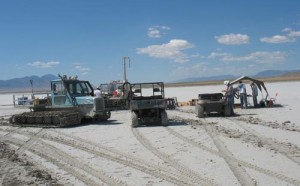 The Company is delighted to report this development to shareholders, and views this as achieving the most significant milestone since acquiring the K2O Utah Potash Project. The US BLM Federal Potash Exploration Permit awarded to K2O Utah is the first one to be granted in Utah for more than 25 years according to company research. K2O Utah is also the only applicant to receive a “Non-Known Potash Leasing Area Designation” in Utah during this time.

Approval of the Exploration Project and issuing these 22 potash prospecting permits now allows exploration activity to move on to the Federal land following on from the significant progress made during 2012 on the State areas. Importantly, it also means the Company’s independent geologists, Agapito, can immediately prepare the maiden JORC resource for the project.

The BLM completed its Environmental Assessment, issued a Finding of No Significant Impact and signed a Decision Record approving this potash project in San Juan County Utah.

Exploration drilling can now take place on potash prospecting permits approved by the BLM on April 25, 2013. Prior to this approval exploration was restricted to the limited number of blocks on Utah State land.

This BLM approval will allow Potash Minerals to drill in the highly prospective leases on Federal land contained in the 405 Km2 project area, where the company will be targeting the best widths and grades of Sylvinite within the project area.

The Company is excited about the potential for continuing success as the path is now open to progress to the feasibility study stage of this significant potash project.

The K2O Utah Potash Project is strategically located to serve the large US market with the Company enjoying significant support at a County, State and Federal level which will hold it in good stead as it moves towards Bankable Feasibility.

Mr Ben Binninger, Director, Potash Minerals, said “The timing of the approval and the expansion of exploration activity at the project could not come at a better time. “Currently the US market is primarily supplied from imports. New sources of domestic potash will help the USA become more self-sufficient in this critical agricultural commodity. As a result, in addition to being good news for shareholders, any success at K20 Utah will be watched with anticipation by the local US market and by prospective investors,” Mr Binninger said.

About the Paradox Basin Potash Project

The BLM has approved the assignment of all the 405km2 of leases to K2O Utah. The BLM has also ruled that all of K2O lease lands are now designated a Non Known Potash Leasing Area and therefore will not be subject to competitive bidding.

The Paradox Basin Potash Project is located close to key agricultural regions of the United States and as such is well situated to supply fertilizer manufacturers and agricultural cooperatives in the western United States. The Project also has substantial export potential given its excellent proximity to key US rail infrastructure leading to West Coast ports.

The Paradox Basin Potash Project comprises potash mineralization in two beds of interest, Potash 13 and Potash 18, which occurs in two sub-beds. Potash 18 Upper is ubiquitous across the property, while Potash 18 Lower occurs locally to the southwest. An Exploration Target estimated by independent consultants Agapito Associates, Inc. for Potash Beds 13 and 18 of 3.4 to 5.2 billion tonnes of sylvinite at an average grade of 23% to 34% KCl has been delineated within the Project. Potash 18, which is the principal bed of interest, was estimated to be 3.0 to 4.6 billion tonnes sylvinite at an average grade of 24 to 35% KCl. The Exploration Target estimate was updated on July 8, 2011 to reflect changes in the Project boundary and newly acquired geologic information.