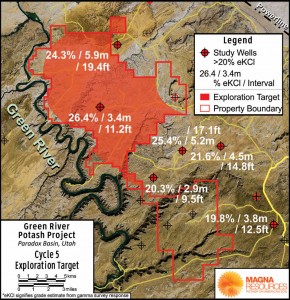 Magna Resources Ltd. (CNSX:MNA)(OTCQX:MGRZF) is pleased to announce that the U.S. Bureau of Land Management has completed a comprehensive Environmental Assessment  conducted on the Company’s Green River Potash Project in the renowned Paradox Basin, Utah on the Company’s Exploration Plan and arrived at a ‘Finding of No Significant Impact’.

“This positive determination is a momentous conclusion to the Company’s Prospecting Permits application process, representing the most critical milestone achieved to date on the Project and by the Company,” states Mike Sieb, President of Magna Resources. “The BLM approval is only the second to be granted in Utah in the last 25 years, reflecting on the capability and perseverance of the Company as well as providing an exceptional first mover advantage opportunity into the extensive Paradox Basin.”

The BLM approval grants the Company through its wholly owned subsidiary, American Potash LLC., the right to initiate exploration and advance the Project. The Exploration Plan, consisting of four drill holes on Federal land and four drill holes on State land, is designed to provide full coverage of the Project’s Cycle 5 potash horizon Exploration Target encompassing approximately 35,000 acres (14,150 hectares) and projected to contain between 600 million and 1 billion tonnes of sylvinite with an average grade ranging between 19 and 29% eKCl(i).

The results garnered from the completion of the Exploration Plan are intended to provide drill grid spacing to sufficiently characterize the Cycle 5 potash target horizon (grade, thickness, extent, uniformity and mineralogy) in order to produce a Mineral Resource estimate (as defined under National Instrument 43-101) and ultimately form the basis in the determination towards the potential economic and technical viability of the Project’s future development.

Following the FONSI, the Company will expect the timely issuance of the Federal Prospecting Permits by the BLM. The Decision Record and FONSI can be viewed on the BLM’s electronic bulletin board at www.blm.gov/ut/enbb/index.php under the project name ‘American Potash Green River Potash Exploration Project’.

The Property is situated in the renowned Paradox Basin, which contains the stratigraphic sequence of evaporite/salt layers that comprise the United States’ sole solution mining potash operation, the Cane Creek potash mine. The Cane Creek mine is currently exploiting Potash Cycle 5, which underlies and extends throughout the Green River Project area and is Magna’s prime exploration target.

Preliminary analysis of down-hole electric log data from 33 local and regional oil and gas wells suggests that Potash Cycle 5 is a regionally extensive sylvite-sylvinite bed in the northern Paradox Basin demonstrating continuous thicknesses and improving in thickness and grade across the Property to the northwest. The most prospective zone of mineralization appears to be located beneath the central and northwest portion of the Property where potash-bearing Cycle 5 is inferred to range from about 3 to 6 m thick and grades from 22 to 25% eKCl(i).

The Company’s technical report on the Green River Potash Project by Agapito Associates Inc.(iii)  classifies Cycle 5 as a NI 43-101 exploration target (the “Exploration Target”) projected to contain between 600 million and 1 billion tonnes of sylvinite with an average grade ranging between 19 and 29% eKCl, assuming a bed thickness cut-off of 2.0 m and a composite grade cut-off of 15.8% eKCl. Cycle 5 ranges between 1,200 and 1,900 m depth on the Property.

(i)            The prefix ‘e’ in eKCl indicates that the grade was estimated utilizing the response from the gamma ray log surveys and was not measured from chemical analysis of the core.

(iii)          The Report was prepared by Vanessa Santos, Chief Geologist with Agapito and a Licensed Professional Geologist in the State of South Carolina, and Registered Member of the Society for Mining, Metallurgy, and Exploration, and Leo Gilbride, Senior Consultant with Agapito and a licensed Professional Engineer in the State of Colorado, each of which are qualified persons as defined by and independent of the Company for the purposes of National Instrument 43-101; and have reviewed the related scientific and technical information in this press release.

The specific data referred to in the Report was obtained from historical sources believed to be reliable but which have not and cannot be verified. For additional details regarding the Property, the Report and the Exploration Target

Magna Resources Ltd. is dedicated to the acquisition and development of potash mineral deposits in the USA and elsewhere. The Company, through a wholly owned subsidiary, American Potash LLC, a Nevada limited liability corporation, holds certain State potash leases and an option in respect of certain federal potash prospecting permit applications in the State of Utah that constitute the Green River Potash Project, host to a significant potash Exploration Target.