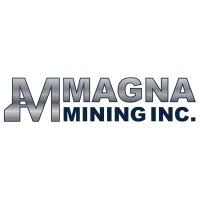 Magna Mining Inc. (TSX-V: NICU) is pleased to provide assay results from the first two diamond drill holes that were designed to test a portion of the P-4 target, located 5 km to the east and on strike of the past producing Shakespeare Mine stratigraphy.

Mynyr Hoxha, Vice President of Exploration, states, “The discovery of semi-massive sulphides within a gabbroic unit in a sedimentary rock environment almost 100m from the Nipissing gabbros is extremely encouraging. The first two holes testing this target provide strong support for our thesis that our 180km2 land package has potential to host multiple deposits of high-grade nickel, copper, and precious metal mineralization. What we find most encouraging about this discovery is that unlike our current Shakespeare deposit, which is comprised of relatively consistent concentrations of disseminated sulphides, the new discovery shows evidence of sulphide and metal segregation. Magna geologists interpret this mineralization as a magma injection into the sediments, possibly from a large magmatic source at depth. Follow-up work will involve borehole electro-magnetic (EM) surveying on the recently completed holes and additional drilling designed to further define the new mineralization and to follow this system to the potential source at depth. Additionally, a second known EM geophysical anomaly, located 400m further to the east of the new mineralization remains untested.” 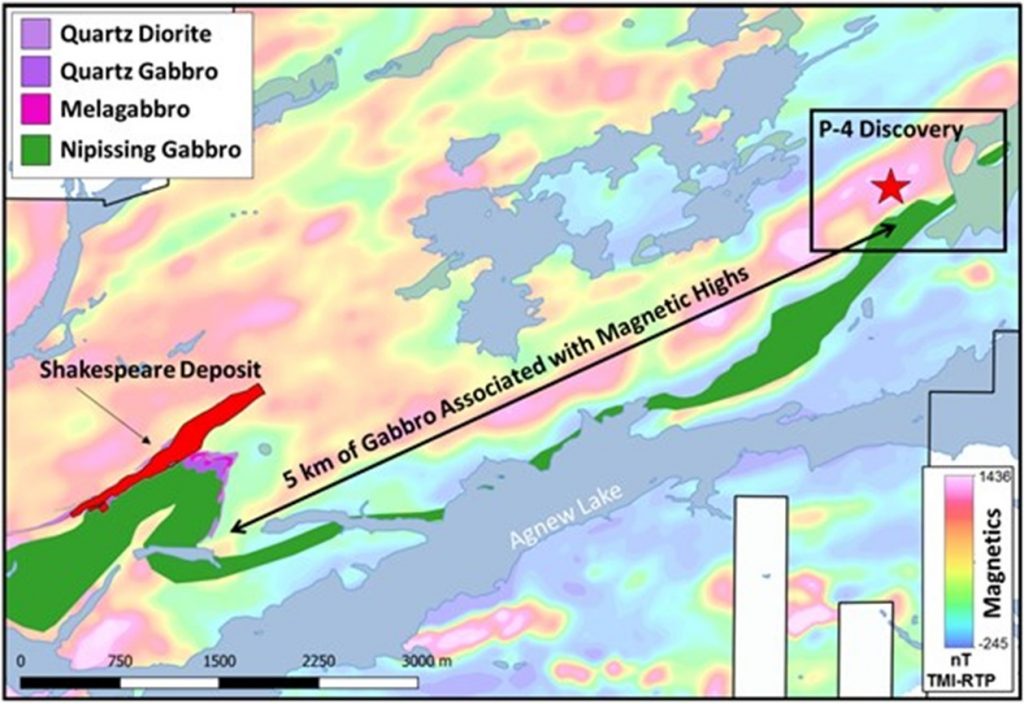 Figure 1. Plan view of the P-4 target location in relation to the Shakespeare Deposit 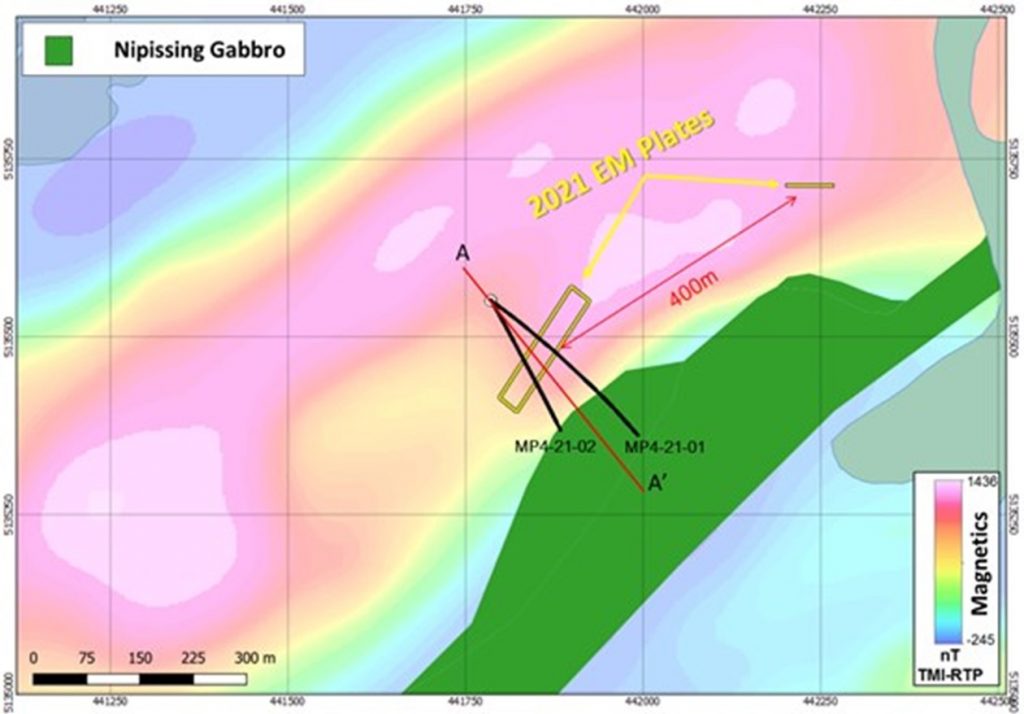 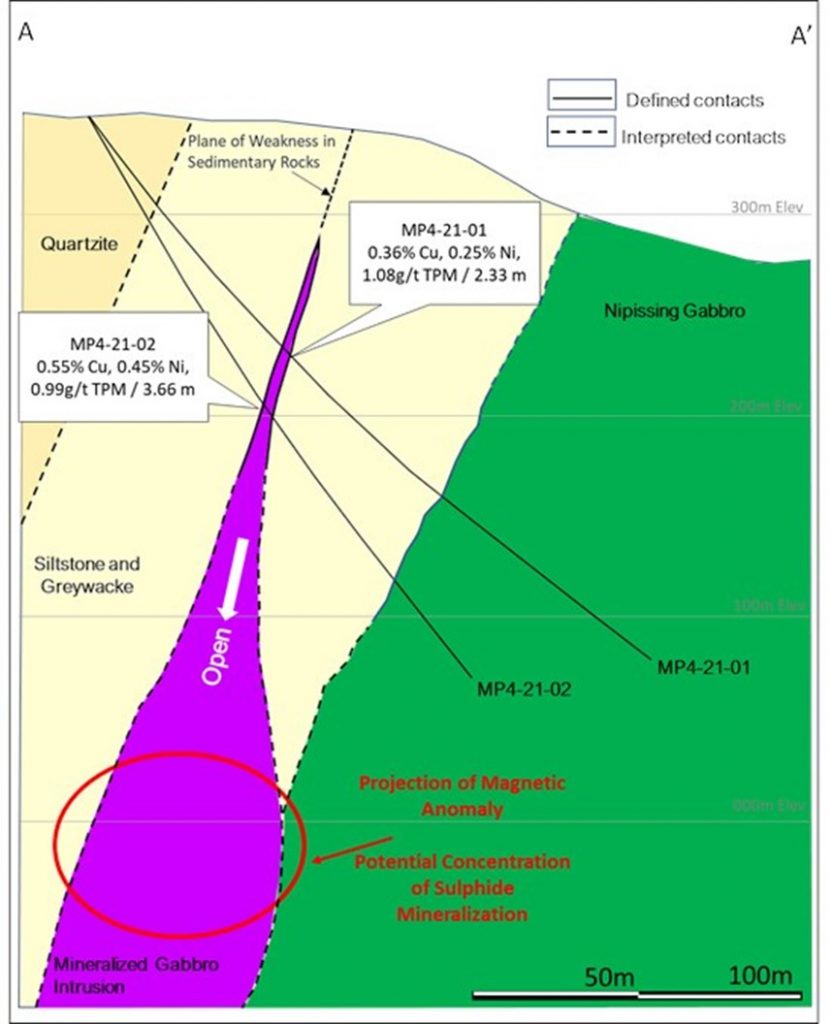 “This discovery is a first step in our regional exploration program and validates Magna’s belief that the Shakespeare Project has the potential to host multiple nickel, copper, PGM deposits within our extensive land package. The newly discovered mineralization is open in all directions and the current intersections are within 140 meters of surface. Assay results demonstrate a more than 50% increase in base metal grade from the first hole to our deeper second hole. We find this quite encouraging and a comparison of the two drillhole intercepts suggests that the width of the mineralized zone is increasing with depth. Magna’s property covers more than 10 km of strike length of the Shakespeare stratigraphy and associated magnetic anomalies that host the known Shakespeare deposit. This trend has seen very little exploration in the past and the recent results demonstrate the significant geological potential and re-affirms Magna’s belief that there are additional economic deposits to be discovered on the Shakespeare Project. We are looking forward to further testing the down dip extent of this zone of mineralization, as well as drill testing the second electro-magnetic anomaly associated with this exploration target,” states Jason Jessup, Magna’s Chief Executive Officer.

Table 1: Summary of the maiden assay results from diamond drilling at P-4 target

The technical information in this press release has been reviewed and approved by Mynyr Hoxha, Ph.D., P.Geo., the Company’s Vice President of Exploration. Dr. Hoxha is a qualified person under Canadian National Instrument 43-101.

Samples from diamond drilling at our P-4 target were submitted to Swastika Laboratories of Kirkland Lake, Ontario. Samples were marked by geologists, cut, then half the core was bagged in plastic bags, and placed into rice bags with other samples for shipment. Samples were shipped to Kirkland Lake via Ontario Northland Bus services. Quality control samples are submitted with every batch including two known certified references and blank material. Gold was analysed with fire assay and gravimetric finish, Pt & Pd were analysed with fire assay and AES finish, and base metals were analysed with two acid digestion and FAAS finish. All QAQC samples included as part of the sample reported here have passed QAQC. The current exploration program is being carried out under the supervision of Marshall Hall, M.Sc., P.Geo, and the Company’s Exploration Manager.

Magna Mining is an exploration and development company focused on sulphide nickel, copper and PGM projects in the Sudbury region of Ontario, Canada. The Company’s flagship asset is the past producing Shakespeare Mine which has major permits for the construction of a 4500 tonne per day open pit mine, processing plant and tailings storage facility and is surrounded by a contiguous 180km2 prospective land package.