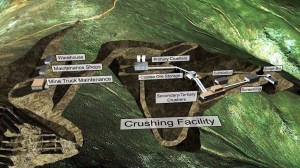 Lydian International Limited (TSX:LYD) is pleased to announce that it has closed its previously announced public offering of 115,000,000 subscription receipts at a price of C$0.29 per Subscription Receipt, for total gross proceeds of C$33,350,000, to a syndicate of underwriters led by Scotiabank. Each Subscription Receipt entitles the holder to receive, upon satisfaction or waiver of all escrow release conditions, one Lydian ordinary share and three-quarters of one ordinary share purchase warrant. Each Warrant will entitle the holder to purchase one ordinary share of Lydian at a price of C$0.36 for a period of 18 months from their date of issuance. The Subscription Receipts are expected to begin trading today on the TSX under the ticker symbol “LYD.R”.

As previously disclosed by Lydian, certain of its pre-existing strategic shareholders have pre-emptive rights which may be exercised in respect of the Offering, and also the private placements, for aggregate proceeds of US$80,000,000, announced by the Company on March 14, 2016.

Lydian is an emerging gold developer, focused on its 100%-owned Amulsar Gold Project, located in south-central Armenia. The Company’s current mine development and construction plan for Amulsar is aimed at achieving average production greater than 200,000 ounces of gold per year and establishing the Company as a high cash-flow producer. The Company is committed to best practices in all aspects of its operations including production, sustainability, and good corporate citizenry.